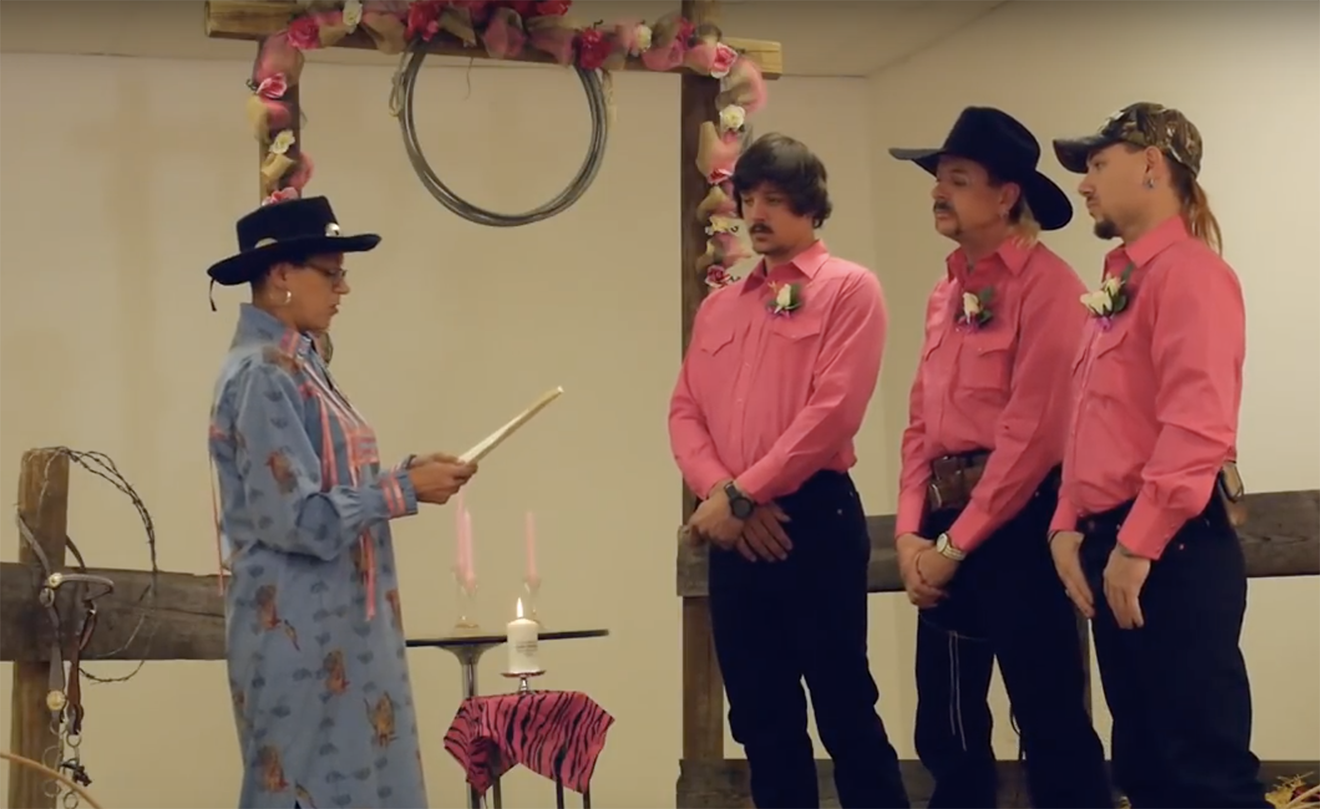 In all the craziness of COVID-19 and lockdowns, the Netflix hit Tiger King has stood out for its own kinda crazy, so it’s unsurprising a video of the show’s star, Joe Exotic in a three-way wedding ceremony has come to light.

The video featuring Exotic, John Finlay and Travis Maldonado, is featured in the series, however, fans have tracked down the full video online.

The marriage didn’t last. Finlay left to be with a woman, and Maldonado unfortunately died. (If you have not seen that episode of the series, we will not reveal the circumstances of his death here.) In the show, both men are described as straight.

“In our society today, no wedding is really normal. Our diverse nation has blended together so many ideas of what it means to be married and how one goes about doing it that there is truly no one way to structure a marriage ceremony,” the officiant says at the beginning of the ceremony.

“But even by modern standards where blended families are the new norm, where ceremonies evoke ancient customs alongside modern creations, where in a seemingly ever-increasing number of states and countries anyone can marry the person they love, this is an unusual wedding.”

“Today we have gathered to witness the union of Travis, John, and Joe,” she continued. “We are here today to offer our love and our blessings as they embark on the next phase of their lives together.”

Despite the collapse of his marriage and the death of one of his husbands, Exotic didn’t dwell too long and re-married just two months after Maldonado died.

Exotic’s happiness was not to last. He was arrested and convicted for hiring a hit man to assassinate a rival animal sanctuary owner. He has since sued for $94 million alleging anti-gay discrimination.

Exotic, who has been quarantined in prison after being exposed to the coronavirus, was the topic of a question put to President Trump in a recent White House briefing.

“One of the biggest rating hits of the coronavirus, aside from these briefings, had been a show on Netflix called Tiger King,” started New York Post reporter Steven Nelson, appealing to Trump’s ego and interest in television ratings.

Nelson then proceeded to give a brief overview of central character Joe Exotic’s situation, and ask Trump if he had seen the show, and query if the president “had any thoughts on pardoning Joe Exotic.”

The president stated he “know[s] nothing about” Tiger King and asking why Exotic was imprisoned.

“Are you on his side? Are you recommending a pardon?” he asked. Eventually Trump stated he’d “take a look” before moving on.

Meanwhile, rumours abound of another episode to be aired on Netflix.