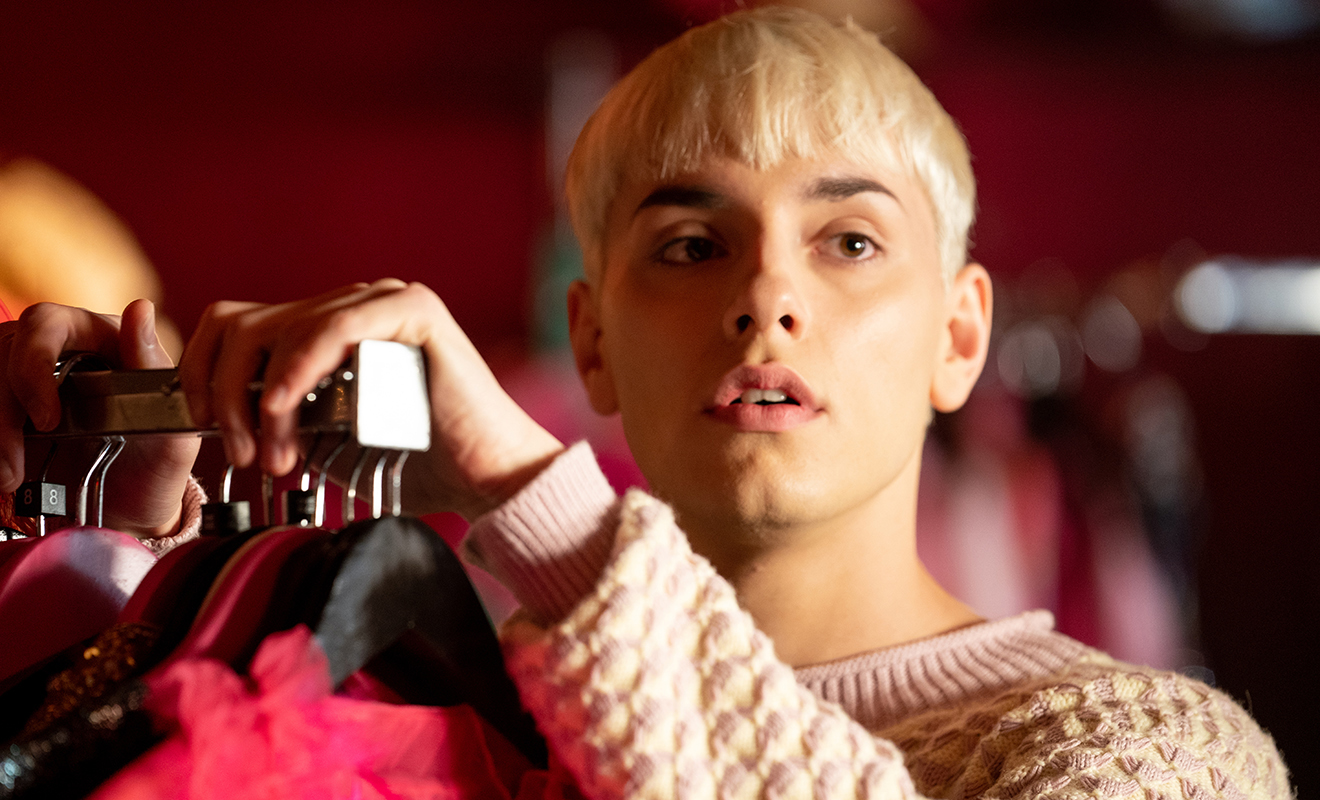 Max Harwood plays the lead role in the wonderful movie musical Everybody’s Talking About Jamie, now streaming on Amazon Prime Video. It’s a coming-out movie with a difference – Jamie (based on a real person) comes out as a drag queen. Max talked to DNA via Zoom from London about his first screen role, which has critics and viewers alike raving.

So it wasn’t an easy journey for you. There were seven rounds of auditions – which was the worst round?

The first couple of rounds were done on tape and I always find tapes hard because as an actor you do a lot of taping for things and you don’t usually know what they want and you can’t gauge whether you’re pitching it right. You basically send out a tape into the universe and hope for the best! The rest of it was completely fun and crazy and an incredible learning experience, truly.

Blocking out the eyebrows. I was very lucky I didn’t have to do it on Jamie. I had an incredible makeup artist, Niall [Monteith-Mann, hair stylist and makeup artist who also did makeup on Cruella] who did my face every day. If I’d had to do it myself it would’ve been, er, a challenge.

Did you practise on yourself much?

Oh, yeah, I went out and bought drugstore makeup and sat on YouTube and watched loads and loads of how-to-do drag makeup videos. It was quite a mess at first, but I’ve got better [laughs].

Have you been out in drag since then?

No, no, I haven’t. I’ll leave that to the professional drag queens.

You’d never done anything before this, not a movie, a TV show, not even a soapie. On a shoot the hours are horrendous, you had heaps of lines to learn, and tricky, complicated costumes. What weren’t you prepared for the most?

I wasn’t prepared for how long each scene would really take, and for the relentlessness of take after take, especially the more physically challenging scenes, like the dance scenes, and having to keep singing while you keep dancing. That was a challenge. Had to keep up my fitness and health.

So much of it rests on your shoulders, but you weren’t alone. Richard E Grant is an absolute gem. What did he give you that really helped?

He gave me space, truly. He gave me space and time, and enabled me to be valid. He encouraged me and said things like: “Max, you deserve to be here.” He’s a lovely person. Just so incredibly generous. There’s a scene close to the end, in his drag shop, which we shot in the first week and it’s quite an emotionally tough scene for Jamie. Richard was off-camera delivering his lines and delivering his performance with just as much gusto as if he was on-camera.

Richard taught me to always be generous and to always be giving back in the scenes, even when the camera isn’t on you. I’d heard horror stories about great actors who turn off when the camera isn’t on them, they get someone else to read the lines, but he absolutely was there every single time to deliver the performance. And that taught me to make sure I’m going to be doing that going forward.

I hear you binged Drag Race before you did the role. What did you learn from RuPaul?

Actually, I was a fan of Drag Race long before I knew this role was coming, so I’d watched Drag Race lots anyway, but RuPaul’s like an incredible, incredible person. And at the end of each episode, Ru says “If you can’t love you yourself, how the hell are you going to love somebody else? Can I get an amen up here?” Through the process of doing this film I’ve definitely learned to love myself, and not give myself too much of a hard time.

RuPaul has also got two strengths to his persona on camera — compassion and toughness. What’s more important?

At the end of the day, you’re not Jamie, you’ve got your own story. Jamie had to face up to, and own, who he was. What were the hardest things you’ve had to own about yourself?

Wow! I think, truly, my desire to be an actor, and my validity, and my creativity, is quite a hard thing to own, even going back to when I went through the process of auditioning for drama school. I auditioned for drama school out of college and was turned away by every single drama school I wanted to go to. I didn’t get in and that made me feel like this big [hands close together] and like this was never going to happen for me.

I then went on to drama schools and found some amazing teachers and had some amazing training, but then I also found that some people try to take you down and say you’re only ever going to be in the ensemble because you look this way, or that way.

The hardest part about my journey has basically been finding my own authenticity, and my creative side, and owning who I truly am without trying to fit any particular mold.

Check out the trailer below: