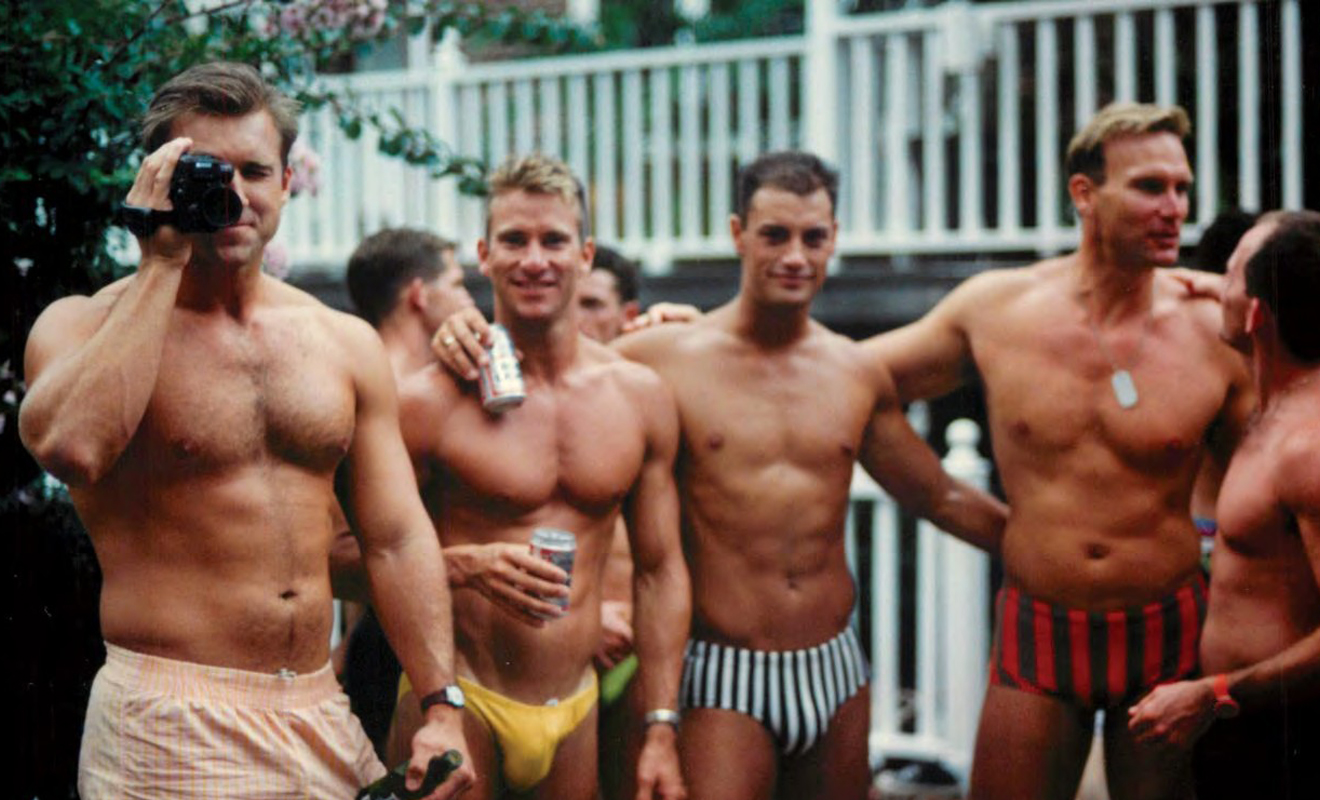 October is LGBT History Month, to celebrate DNA is republishing important stories from the LGBTQIA+ past; including our iconic role models, stories of our struggles and a celebration of our wins as a community.

It’s Facebook-meets-Ancestry.com for the LGBT community. New website, Capturing Rainbows chronicles over 40 years of the gay community in words and pictures.

Former Wall Street banker Mike Balaban created Capturing Rainbows, a website for sharing personal stories and photographs from the dawn of gay liberation. What started as an Instagram account become a global project to document our colourful past and record our history, before it disappears. Mike and co-founder Tom Walker spoke to DNA.

DNA: “Capturing Rainbows” is such a beautiful image – what made you think of it?

Mike: We were searching for a name that would immediately convey the purpose behind our initiative and wanted to be inclusive of the bigger LGBT community.

Tom: A large part of our mission is to collect memories and a rainbow captured in a jar seemed like the perfect metaphor.

How did the idea for Capturing Rainbows come about in the first place?

Tom: It happened in two stages. Mike’s vintage photos with narrative going back 40 years were becoming quite popular on Instagram and he was being beseeched to publish a book of them. He’d been referred to me, someone with 30 years’ experience in the publishing industry, as a possible curator for the book. I persuaded Mike to preserve and share the stories digitally.

Was the aim to fill an apparent gay history void?

Mike: History most often records big events like Stonewall, the AIDS epidemic, and the campaign for marriage equality but the small moments in peoples’ lives are equally important to remember and share. “The extraordinary events of ordinary lives” – that’s what Capturing Rainbows aims to document.

What is your vision for Capturing Rainbows?

Mike: We have grand ambitions, though realising them will require enthusiastic participation by many in our community. Capturing Rainbows is first and foremost a repository of our history, in pictures and words. Right now, we are focusing on people sharing their memories in a few sentences, or a short story, or with snapshots from their lives. Photo albums were once handed down through families from generation to generation. Typically, photos of the LGBT community haven’t made it into traditional family albums… and many LGBT community members haven’t had spouses or children to pass these things on to. Part of the reason I wanted to share my photos was to live on beyond my lifespan – not that I am planning on going anywhere soon!

Tom: For the time being, we are focusing on written stories and photos, but eventually we intend to include audio and video interviews.

And you see it as an opportunity to create and grow a community, right?

Tom: In New York City alone there used to be dozens of gay bars, restaurants and coffee shops. Most of these LGBT gathering places have disappeared. This has happened for several reasons: major cities are becoming too expensive to support these “alternative” enclaves; the rise of apps like Grindr and Scruff replacing those hangouts, and the general mainstreaming of the LBGT community are all partly to blame. Yet, as the LGBT community gains greater acceptance and becomes more integrated into the larger society, we are also facing greater resistance. There will always be a need for safe havens and Capturing Rainbows aims to help fill that need.

Mike: The families that many LGBT community members create are often not of blood, but of shared experience. We want to facilitate this sharing to build stronger bonds within our community, as well as between older and younger generations. So many younger LGBT people today don’t know what it was really like in the earlier years.

That’s why members will be encouraged to get to know each other, creating mentor-protégé relationships and friendships?

Mike: Yes, members will get to know each other online, which hopefully will lead to offline friendships. As the membership grows, through tagging of photos and other interactions, we envisage the potential not only for new friendships to be developed, but also for members to be reconnected with old friends from their past and from around the world. Even in its early phase, Capturing Rainbows is proving to be a global platform. Already, we have members from the US, UK, Switzerland, Hong Kong, Nigeria, Israel, Australia and Argentina. I just heard from someone in Malaysia last night.

Tom: And if we succeed in our ultimate vision, Capturing Rainbows will become a producer of content about the LGBT community for books, films, etcetera – for our members and wider society.

Is this something that could become bigger, like a gay ancestry.com?

Mike: We hope and believe so. In fact, we’ve been describing it as a “combination of Facebook meets Ancestry.com” for the LGBT community. If you remember, Facebook started as a directory for students at Harvard and look what it grew into. Everyone we have spoken with has commented on the need for something like Capturing Rainbows and has also expressed amazement that nothing like it had already been established.

What have been some of the most touching moments when putting Capturing Rainbows together?

Mike: There are numerous stories posted by members who share their experiences with coming out or losing close friends and loved ones to AIDS. But, the most touching moment for me may have been when a self-described “15-year-old closeted boy living in a deeply (and unfortunately) conservative part of the south” explained how inspiring the photo stories on my Instagram and Capturing Rainbows have been for him. He ended with: “Nothing has ever made me feel more content or less alone than reading your posts. Thank you.”

In the current political climate, there couldn’t be a better time to be out and proud, agreed?

Mike: Yes and no. There is a valid debate about how much has been gained versus lost with gay rights progress over the last several decades. We have gained the freedom to be ourselves – depending on where you live and your family’s beliefs – and are being accepted by society in greater degrees. Yet, mainstreaming has had its disadvantages.

We’ve lost a lot of our counterculture in urban centres like San Francisco and Manhattan that helped define our community. Capturing Rainbow’s goal is to document our histories before they disappear, and through this, provide a context and a staging ground for our culture and community as it evolves in the future.

Tom: The rise of authoritarian governments around the world is serving to reverse some gains of the LGBT movement, and not every country has shared in those gains yet. We want to educate millennial LGBT youth as to how we fought those battles so that, if it becomes necessary to fight them again, they’ll be equipped with the knowledge and tools.

The AIDS era almost wiped out an entire generation of gay men. Does the project cover much of this time?

Tom: There are other outlets focusing their efforts specifically on this topic. The AIDS Memorial page on Instagram consists entirely of tributes to those who lost their lives to AIDS. We see what we offer as being complementary. While the AIDS crisis is very much a part of the times we are documenting, they were so much more than just that. Our goal is for Capturing Rainbows to provide a comprehensive picture of the many experiences, time periods and locations that have made up the global LGBT experience across many decades. That said, the lessons from AIDS are many and we should remain cognisant of them.

How can we best learn from our gay history?

Mike: The first and most important step we must take is to document it. The next most important step is for members of our community to share it, and hopefully that will lead to greater learning. No matter how many statistics and dates you show someone, it only takes one great story to make people experience it viscerally. From The Diary Of Anne Frank to The Color Purple, to Malala Yousafza’s first-person account of her life in Afghanistan, it is the personal story that resonates most.

Tell us about life as an out gay man in the pre-AIDS era.

Mike: I came out in 1976. Gay men were asserting that we were not at all like heterosexuals and, as a group, we were proud of our ability to have sex anytime with anyone we wanted. We rejected the conventions of straight society, including marriage, home ownership, parenting, etcetera. It wasn’t easy during the 1970s to form lasting relationships because most gay men preferred quick sex without commitments.

Tom: I moved to New York City in late 1980, which was when I really started to discover the gay community there. AIDS, or the “gay cancer”, as it was whispered about in those days, was always a spectre that was looming. In 1984, I moved to Hong Kong for a couple of years which, in my mind, made me feel safe – away from the epicentres of the disease which seemed to be San Francisco and New York. The reality was very different. Most of my gay male friends from Hong Kong from those days had all died by the early 1990s. There will always be a big hole in my heart.

Gay marriage has become a huge political issue. Did you ever think we would get so far in your lifetime with this?

Mike: Absolutely not; at least, not until the last 10 years.

Looking back at your own gay past, what are the biggest life lessons you’ve learned?

Mike: Never forget; history has a stubborn way of repeating itself and those who do not learn from history are doomed to repeat it.

Do you have any life regrets?

Mike: I don’t believe regrets serve a useful purpose, but I guess I wish I lived in a time where I could have come out earlier and avoided the discomfort and internalised homophobia that were inescapable growing up when I did.