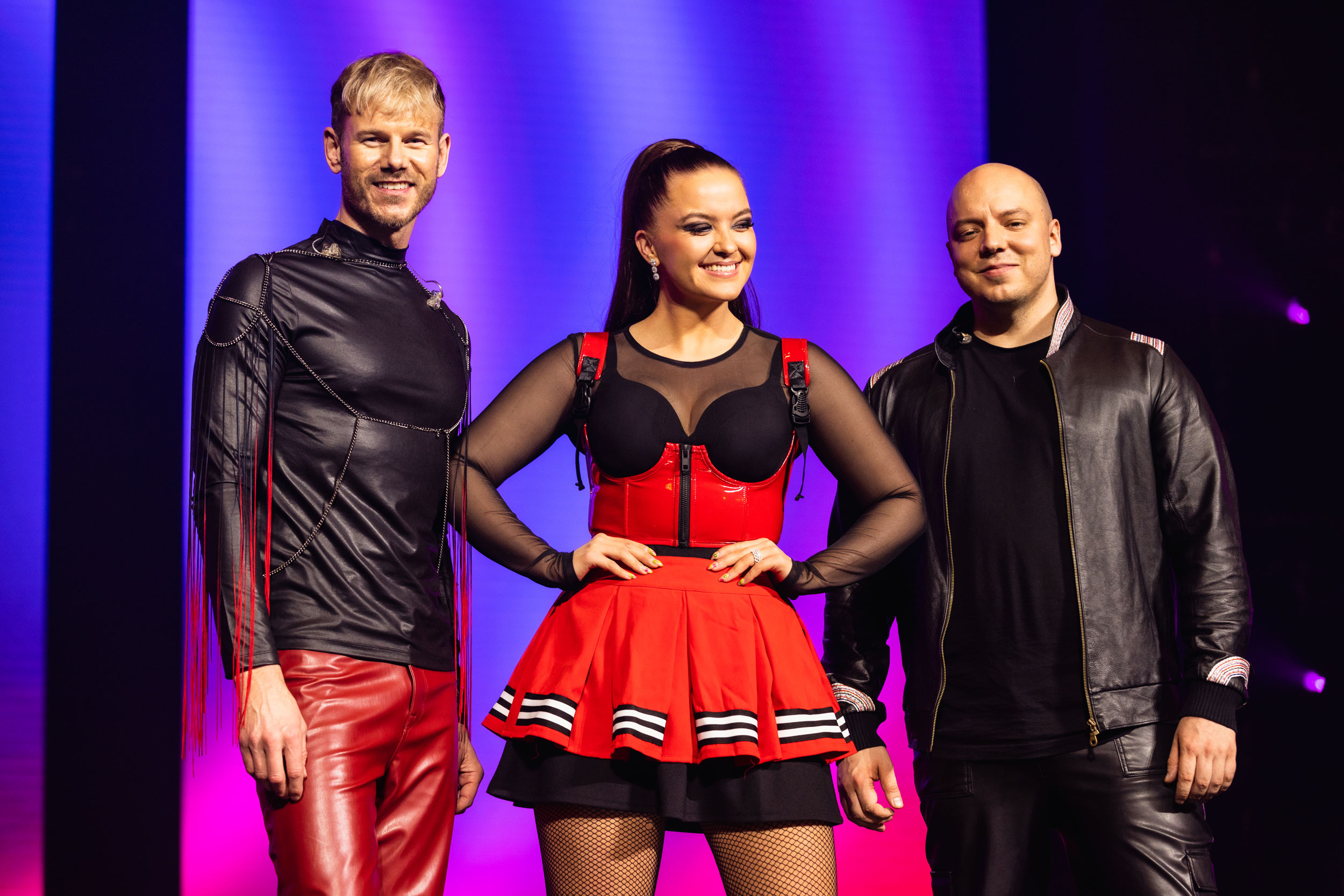 Norwegian supergroup KEiiNO are currently on tour in Australia. Since the trio first came to the attention of local audiences during the Eurovision Song Contest in 2019 (watch our mini interview for a refresher), where they debuted a televote winning performance of ‘Spirit in the Sky’ they are here to give back to their fiercely loyal fanbase, a lot of whom are made up of queer minorities.

Combing uplifting dance-pop, Nordic Folk and Sámi Joik, their critically acclaimed album OKTA, has just been repackaged to include further collaborations with indigenous artists from their journey, including our own Electric Fields.

They kicked off their KEiiNOZ Tour ’22 opening Eurovision – Australia Decides on the Gold Coast recently, and we’re so glad our borders have reopened for them to do so.

Alexandra Rotan. Tom Hugo. Fred Buljo… what is with our obsession with KEiiNO? Why do Australians love you so much?

Alexandra: “We’ve always been in love with Australia–all three of us! But during Eurovision, we actually got the most public votes from Australia, how could we not come… usually it’s nice weather!”

Tom: When we were here in 2019, we got to know a lot of the die-hard Eurovision fans who are really open to the diversity in our music. We love to include the indigenous part with the Sámi, people understand the culture and value of that. We’re more than just producing pop music to entertain, we also want to create a musical universe where anyone who feels on the side of ‘normality’ can feel at home… and we feel that resonates with our Australian fans.

This is a full concert, with a live band…

Tom: Now our fans can see what we can bring live, which is more than what you’ve seen at Eurovision or Australia Decides… more than one or two songs. Yes, with a live band. We can properly present all that we have in the KEiiNO-universe!

Our plan was originally to do a new album and tour that. But we’ve released so many singles over the last two years during the pandemic, that we thought we’d re-release OKTA and tour that… and then start again, which will be our third album in a way.

The latest single is a cover of On A Night Like This, which had its debut at Australia Decides! Has Queen Kylie given it her blessing?

Alexandra: We don’t know, we hope so!

Tom: We hope that somebody might send her a link and hope she won’t be mad at us. But we wanted to hail Kylie, we’re fans of her.

Alexandra: Yeah, we want to show that her music is great and it would be cool to add our touch to her song. We hope she likes it.

Describe the creative process for creating a KEiiNO-sounding song.

Fred: Usually we always start with a guitar, sitting around jamming melodies. Mumbling some lyrics… If it works great on guitar, we’ll take it to our producer and a song is formed. We all come from different places, for example, it’s natural for me to write Sámi lyrics and to use my joik.

Alexandra: Definitely–and I feel since we are so three very different artists with different voices, it creates that KEiiNO touch, hearing our recognisable vocals together.

Tom: When we have a melody and chord structure we like, we ask what do we want to fill this with, what do we want to share to the world with this song? Our lyrics should be more than boy meets girl or boy meets boy and this is a love song… and together with our lyricist Alexander Olsson, we create a story that is the foundation of everything. We want to make people move when they hear our songs, we like to create a spark of energy.

You’re here at the same time as Sydney Mardi Gras, and you’ve performed pride festivals in Madrid, Cologne and Stockholm. This tour finishes at the Chillout Festival in Daylesford… tell me your pride anthem Black Leather is in your setlist?

All three: Of course!

Tom: You may recall we were wearing black leather on stage at Australia Decides…

I definitely need those pants for Sydney Mardi Gras this Saturday. Why do you think queer people gravitate to you?

Tom: The most important thing for us is we’ve been true to our value motto ‘Unity in Diversity’, which is maybe more important now than ever. The world will only be a better place if people are allowed to be who they are, and who they want to be… and who they identify as.

A lot of our songs are about that… to be unbreakable, to be strong enough. And to stand up against a force that might be, on paper, stronger than you.

Alexandra: You can never tell an audience to like your song. But if you like the music you listen to, you want to keep track of that artist. When we’re on stage, it’s nice to see how many different people are in the crowd… beautiful, beautiful diversity. That warms our hearts as we are different, we’ve been told we’re different, and we want to be the voices for the people who feel the exact same way.

Tom: “I’ve felt the external pressure to fit a mould, to do and say what’s expected. Fred has also felt that people are not always positive to the Sámi culture, so we are in a way–all three of us–a bit aside from the majority, and that helps people connect with us.”

What else are you up to while you’re in Australia? I know already that you’re doing one of The Fabulous Wonder Mama’s walking tours of Sydney’s LGBT hub?

All three: We are so excited about that one!

Alexandra: We were supposed to go scuba diving, but the weather conditions hasn’t made that possible.

Tom: We’re filming a little documentary as well, from our life on tour, but also about the diversity of people we meet. What to do, what to see, what to eat. In Victoria we’ll do a wine tasting, visit a farm, learn more about the Aboriginal culture as well.

What’s next for KEiiNO, when you return to beloved Norway?

Alexandra: A lot more music… which is exciting, and hopefully have a lot of concerts.

Tom: We’re building this online platform, which we’ll reveal more later on, but we’ve been searching for a way to connect even stronger with our followers around the world, where we can release special content, maybe a private concert here or there…

Maybe a KEiiNO-fied Christmas song? Let’s will it into existence…

You can follow KEiiNO’s adventures on all social platforms, and joik to the the ultimate KEiiNO playlist here. KEiiNO are playing NSW and VIC shows this and next week. Check www.keiino.com/keiinoz for tickets and details.