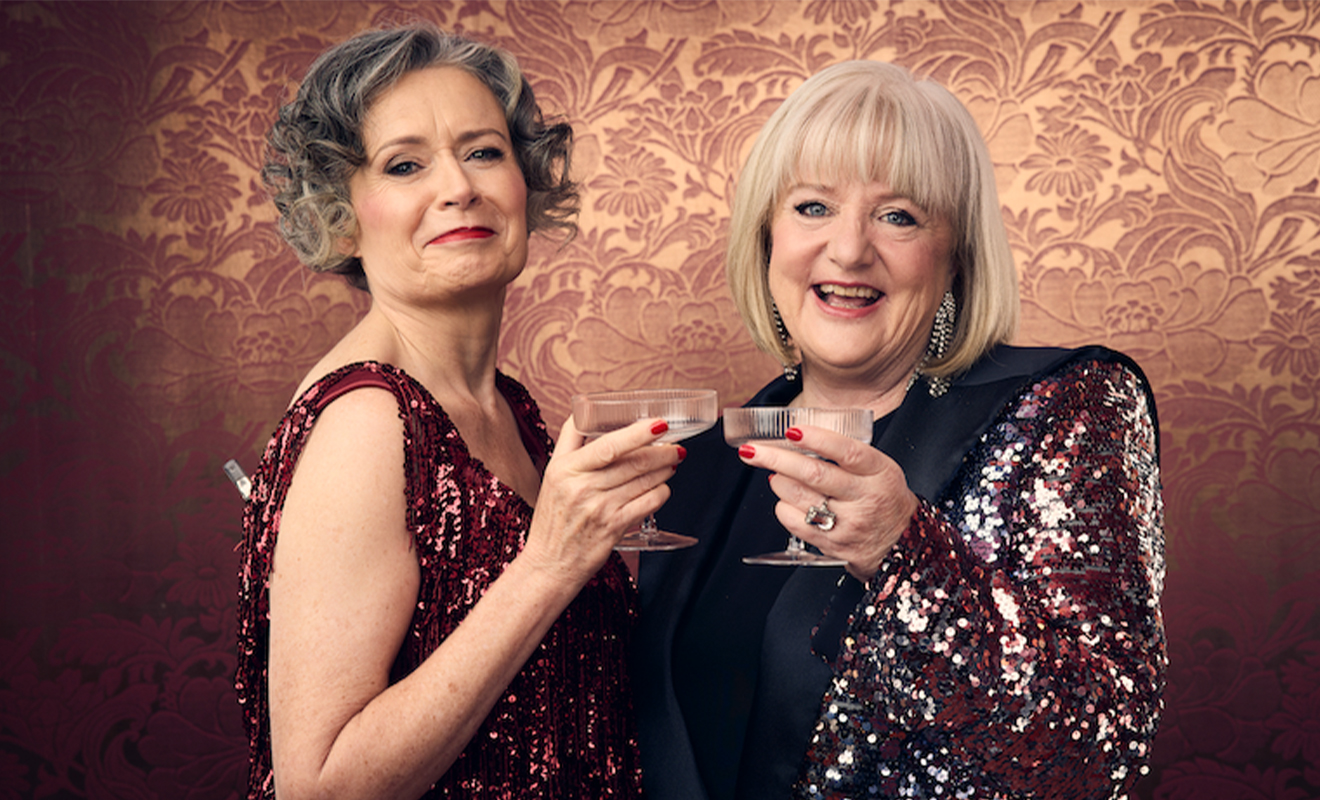 Just as Judith Lucy opened her new show about surviving covid, she came down with… covid. She’s back on her feet and touring again with Denise Scott in Still Here.

DNA: We’ve had Lucy and Ethel, Thelma and Louise, Cagney and Lacey, Grace and Frankie. Where do Jude and Scotty fit in that rarefied group?

At the very top! Scotty and I have been in this ridiculous business for so long. Look, the fact we’re both still alive and still performing and still selling tickets is something to celebrate. Hence the name of the show.

No, we loathe each other, Ian, and we can’t talk about it openly because we have to keep living this lie that we’re actually friends. At the start of every year I ring up Julia Morris, Kitty Flanagan, Ann Edmond, Celia Pacquola, Hannah Gadsby – I’ve tried them all and they just won’t say yes. So, I’m forced to work with this dead albatross around my neck, Denise Scott. In all seriousness, yes, we are genuinely very close old friends. And you know what? If there’s one thing people always say about the show it’s, “Oh, my God, the chemistry you two have!” And you’re right. You can’t fake that. We are genuinely really good friends, and we genuinely make each other laugh and we genuinely enjoy having a dinner and a wine together after the show.

Both. A lot of both.

Surely you annoy each other from time to time. When you’re about to go on stage and you just can’t face each other for that brief moment, how do you gather yourselves and perform as though nothing’s wrong?

See, that’s never a moment! Of course, there are times when we give each other the shits, but it’s never that moment. And we never feel like that before we walk on stage, or when we’re on stage. Quite honestly, I’m more likely to think that when we’re walking to a restaurant and I have to deal with the slowest walker on the face of the earth as she shuffles along beside me because of her arthritis.

I said goodbye to dignity many, many years ago, Ian. I very much script my stuff, so does Scotty. We both love talking to the audience and because we’ve both been doing it for so long we’ve both got real relationships with our audiences, separately and together.

You know what, the worst thing that can happen when you’re talking to the audience is, yeah, it goes a bit pear-shaped, and then you just go back on script. We talk to the audience in this show as we always do and because we’ve done the show a few times now there’s a great balance of script and looseness. I don’t think I’ve ever painted myself into a terrible corner. If things are really going to shit, you just get back on script.

What material is going over well for you both right now?

I’m amazed at the depth of honesty to which you stoop. You’ll stop at nothing to mine for laughs. Do you have no shame? Are there limits to what you won’t reveal?

There are very few things I haven’t shared with my audience, from death and adoption and breakups, to dry vaginas and my vulva portrait. So it would appear there’s very little I won’t discuss but there’s no better defence than being completely open. I choose what aspect of a particular story I wanna tell. I’m not giving away quite as much as people maybe think I am.

Ever said too much?

Occasionally I’ve made the mistake of talking about something on stage when it was just too raw. Audiences just know, they can sense where you’re at. They want you to come out and be completely relaxed with your material.

I’ve been asked a lot over the years: “Is your stand-up cathartic?” No, it’s not because I’m not trying to work out any of my problems on stage. If I were doing that, it wouldn’t be very funny. I always remember getting up on stage and talking about finding out I was adopted only two weeks after I found out. I was still completely out of my mind. Unsurprisingly, that whole story was met by mystified silence. I was clearly too distraught to talk about it.

In Judith Lucy Versus Men, who won?

Look, I did. The tour went really well and I made quite a bit of money [laughs]. What’s absolutely hilarious, Ian, is that the show was horrendous story after horrendous story about my love life. At the end, I got the audience to vote on whether I should get back on the pony or just give up. Every single night, despite listening to the tragic history of my love life, people voted that I should get back out there. But in my own head, Ian, I’d decided I was done. But, as luck would have it, someone has come along! His name is Michael.

Is he worried about becoming fodder for your show, like previous partners?

No, he’s not, because, fingers crossed, he’s not planning on spending two years stealing money from me. If you don’t wanna be mentioned in my show, don’t be an asshole. It’s really that simple.

Still Here – talk about an appropriate title for the new show!

Oh, boy. We had to cancel the last four shows in Adelaide. We were meant to do a show that night. I thought I had a bad cold. I’d done two negative RATs – we all know they’re a complete waste of time. That afternoon it became a chest infection. Then the stage manager said this sounds really serious and took me to emergency. I had to isolate in Adelaide. I’m still exhausted from covid, but I’ve just done a whole fucking comedy festival.

How many vaccinations had you had?

Do you think you still felt the full force of covid?

I don’t have anything to compare it to, so hard to say, apart from those few scary hours where I had a very tight chest and I was in emergency and people were doing tests on me. The worst part for me has been the exhaustion. I haven’t been able to shake it. Mind you, I’d be exhausted at this point in the tour anyway. Covid made it worse.

That was research a touch too far.

Yeah. The show is a terrifying documentary for people who didn’t endure the two-year nightmare of lockdown in Melbourne. Sydney got a taste of it at the end.