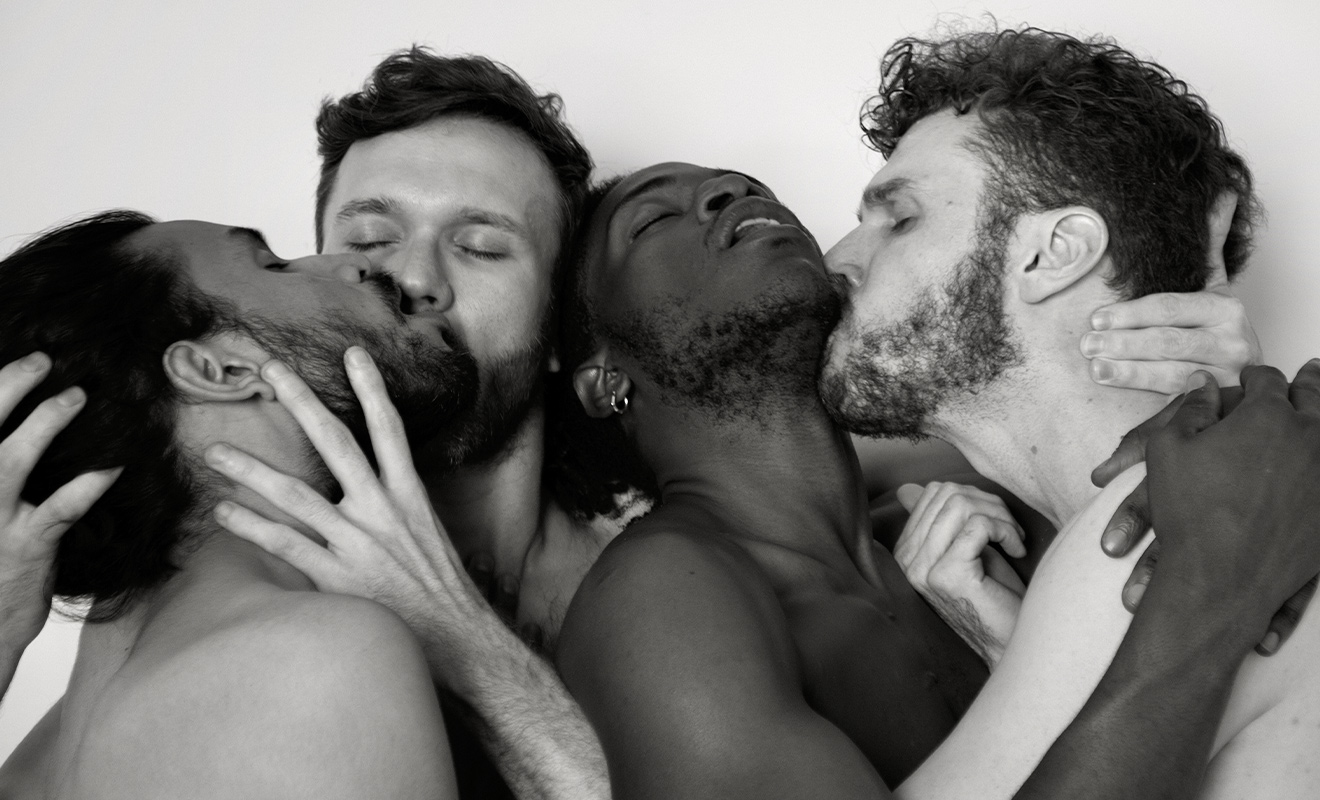 Friendship As A Way Of Life is a major exhibition now on at the University Of New South Wales Galleries, Sydney, celebrating “LGBTQI+ partnerships, collaboration, visibility, sex, intimacy and knowledge”.

It has some arresting images!

The centrepiece of the exhibit is a huge enlargement of a self-portrait by New York artist-photographer Camilo Godoy featuring him and three close friends and lovers in a sensuous embrace.

Other images by Godoy are also on show.

DNA spoke to Camilo Godoy about how these images were shot and how they came to be featured in the Sydney show, which highlights the work of 20 artists.

“I was in a group exhibit at the Brooklyn Museum to mark Stonewall’s 50th anniversary. They showed my zines, called AMIGXS [say ‘Amigex’], a gender-inclusive Spanish word for friends. They’re annual publications I do with photos of friends and lovers engaged in moments of love and lust.

“José Da Silva at the UNSW Galleries emailed me saying: ‘I was really moved by your work at the Brooklyn Museum and I’d love to include you in an exhibition in Sydney.’ So I’m really honoured to be featured.

“The title of the Sydney exhibit refers to Michel Foucault’s thoughts in the ’80s on how the only way to survive is by taking care of one another. How appropriate for this pandemic!”

What’s the relationship between you and the three guys in the Sydney show’s key photo?

“On the far left is me, then Brendan, Carlos and Jorge. They’re my best friends and have been for a decade.

“Our friendship is so deep. There’s our given family, our biological family — then there’s our chosen family, the people we choose to befriend and share space and time and ideas with, sometimes things we may not be able to share with our given family.

“I have so many intimacy experiences with Brendan, Carlos and Jorge I wouldn’t be able to talk about with, say, my sisters because there isn’t that kind of understanding.”

Such as? “Sexuality. I’m unapologetically unafraid with my best friends to be loud and outspoken about my sexual experiences. My twin sister can be very conservative.

“We are gay men. We understand homophobia and growing up with parents not accepting us and controlling us. Brendan in that photo, a gay man of 38, still confronts really awful shunning and homophobia from his parents. The kind of support we three can give him is very meaningful and sustains him.”

Are you in any other photos?

“There’s the group photo and one of Giovanni Guillaume sucking my feet. There’s one of my hand with my friend Justin and there’s a close-up in which I’m holding Brendan’s balls.”

To grab a guy’s balls is pretty confronting. The source of what makes us men biologically is also our most vulnerable part, metaphorically and physically. How on earth did you get that shot?

“I’d texted him to say I’m going to take a photo of the moment in which you ejaculate. He came to the studio. We made the photo and it didn’t really work but what did work was the one in which I’m grabbing his balls.

“This radical idea of friendship and togetherness means we’re able to abolish a lot of boundaries friendships often have. We have a very healthy kind of friendship, we’ve been naked together, even though there’s never been a sexual manifestation.

“It was a very calm, peaceful way of just sharing the moment and embracing art above all. We’re both artists and my creative mind wanted to make this photo and we worked together to make it happen because there’s that feeling of mutual trust that made it possible.

“It’s a reference to this artwork, but it’s also self-portrait of me touching another body. And it’s also this idea of grab him by the balls, just as you say!”

Friendship as a Way of Life runs to November 21 at UNSW Galleries, Sydney.

Full interview, including more about Camilo’s art and his own experiences of given family and chosen family and pushing boundaries, in DNA print edition soon.