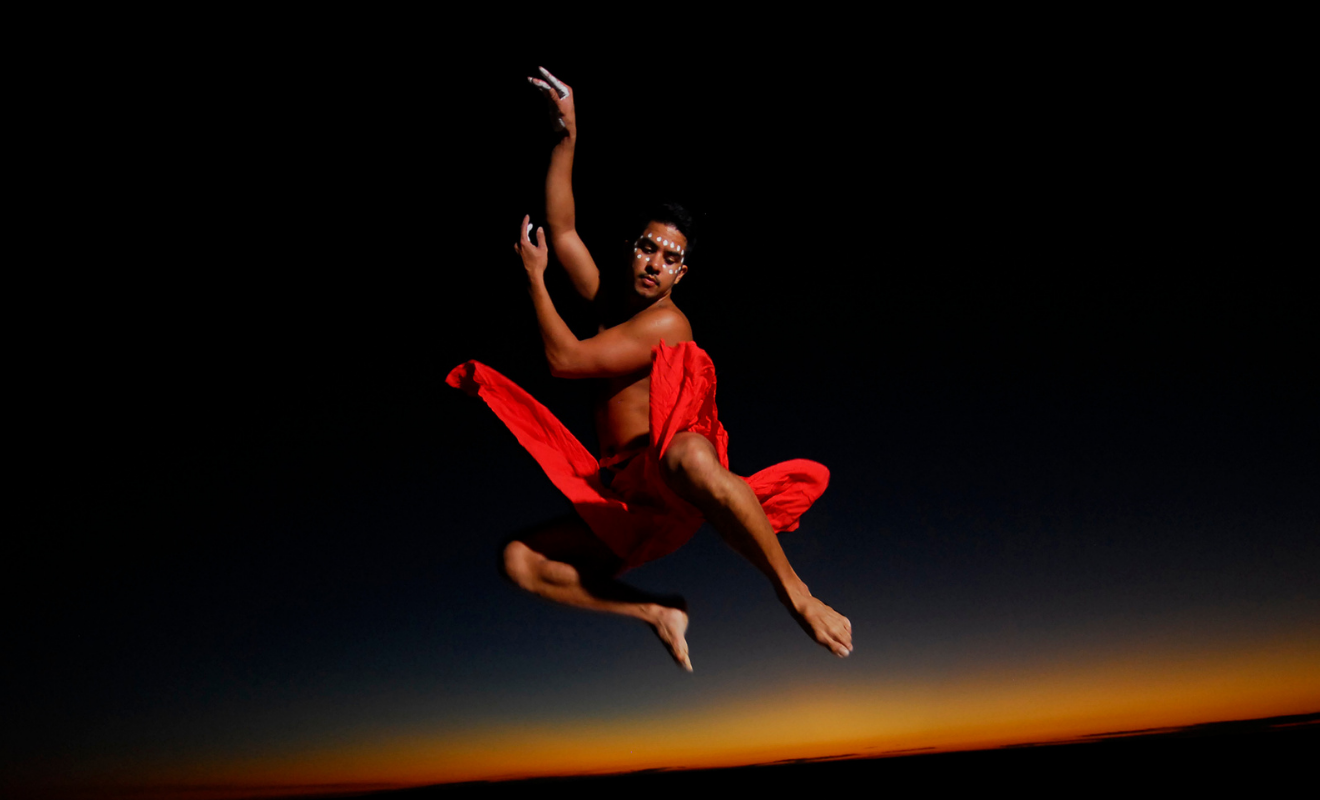 Sermsah Bin Saad is an Australian First Nations artist who will perform as part of Yellamundie Festival. He spoke to DNA…

DNA: Some readers will remember you from So You Think You Can Dance, and we remember your performance at a DNA event a few years ago! Where can we see you perform now?

After Yellamundie [this weekend], I’m performing for the Yirramboi Festival on the 9-16th of May with an incredible group of solo dancers. It will be an experimental piece with the intention to explore our art practice and the LandBack Festival at the Fitzroy Atherton Gardens on the 23rd of January 2021 to remind people that sovereignty was never ceded and to remind the world that the 26th of January is not a day that should be celebrated [as Australia Day] as this is a day of mourning for our people, the day of Invasion. We need to all come together to realise that the only way that we can move forward is together with an open heart and an open mind. We need to acknowledge the injustices that were forced upon our people and to own it. That’s the only way we can start to heal.

What does the tradition of storytelling mean to you and where do you see yourself with in it?

Aboriginal people – the oldest living culture in the world – have been telling our stories of the land and the importance of our ceremonial practices daily since Bookarrakarra (the beginning of time).

With this came dance and song, tools to educate and help people understand the importance of the land and lore lessons and always looking at ways to create sustainability.

As Aboriginal people our ancestral knowledge since Dreaming is deep within our being, which is why the hurt and atrocities caused by colonisation are felt across generations. We weren’t allowed to speak in our language, practise our ceremonies and had to hold our tongue otherwise we would be punished.

I feel it has come to a time now where we no longer stand for being oppressed and we continue to fight for our basic human rights against systemic governance. We want our voices and our stories to be heard and to know some of the truths to our history in this so-called lucky country that we call Australia.

To this day we have not been able to claim sovereignty in our own land. I see myself as a teacher sharing knowledge of the protocol of country and to give more understanding of the atrocities that actually happened.

I want to educate so we become aware that if we keep doing damage to Mother Earth and not listening deeply to her, eventually, we will cause irreversible damage.

We still have the capacity to turn things around if we listen to the knowledge of the Indigenous Peoples of the land.

You are best known as a dancer and choreographer and are using this medium to tell your story in the Yellamundie Festival. What are the advantages movement has over other styles of storytelling?

People in the industry have known me only as a dancer but I also love to act and sing and have dabbled in a little film and television. Dance saved me when I was much younger as it gave me the opportunity to express my emotions without having to speak as I lacked confidence and wasn’t the best communicator.

Dance really helped me to connect not only to myself but to others and my culture. There is a specific type of freedom when it comes to dance that is unexplainable. I feel only dancers can really understand, where you find yourself in a trance-like state in which you start to embody the essence or the spirit of the work particularly when it comes to ceremonial dance.

I believe dance offers another way to reconnect to country and to the spirit of the ancient stories that were told. We continue to do this today just in another form.

Tell us about the story you are telling in the Yellamundie Festival.

This is very personal story not only for me but also for my family. It is a day that I will never forget; just on 23 years ago now my brother was killed in a tragic hit and run incident, I was 18 and he was 19.

It’s crazy to think that it has been this long now but it still feels like only yesterday. It took me a long time to come to terms with this reality as I also felt something was wrong before it even happened – I just knew something wasn’t right.

My brother was incredibly unique and naturally talented. He could make friends with just about anyone from all walks of life but this one particular day things turned awry and our whole lives were turned upside down.

We only know so much of what happened and I’m still finding out things as we go. I remember a couple of years after his death I went to the police station to get some answers but they told me the case was closed, that they couldn’t help me and told me to leave. My Liyan felt no good and I left feeling empty.

I wanted to investigate further and find out the truth because there were so many interpretations of what happened but I also knew that my family was very fragile, especially my mother at this time. It was best to let it be.

The only way to deal with it personally for me was to write about it for my own sense of healing. I wrote little notes here and there -– special memories that I had with him growing up.

Then I stopped and decided to try get on with my life but one day a good friend approached me to bring the story to life so I could have closure. He transcribed for me and we came up with The Seventh Season Dreaming.

It was going to become a work for the Stompen Grounds Festival but the festival fell through and I left it in the works for many years. Then Yellamundie was looking for playwrights to apply their stories to their festival and as I had previously worked on this festival before in 2013. I trusted that my work would be completely respected and honoured and supported by an all Indigenous team and here I am again.

Sermsah will appear at the Yellamundie Festival At Home in February and March (dates to be announced) via SydFest Livestream.