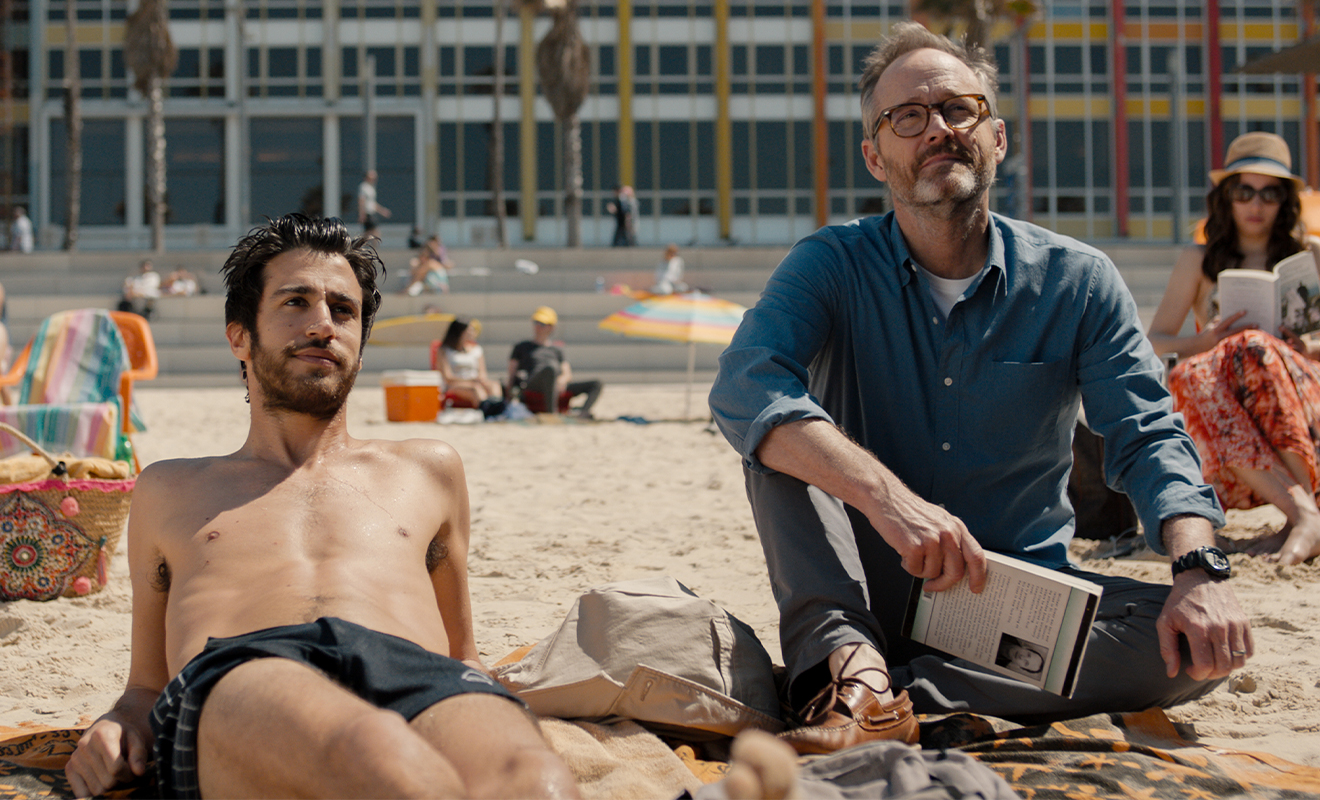 B-Boy Blues is an ambitious, rewarding examination of a relationship going through its stages. What could appear clinical on paper actually makes for a gripping movie, hitting home when least expected.

Jussie Smollett, one of the stars of Empire, debuts his first film as director (and co-writer/co-producer), and sets the tone with a James Baldwin quote, “Love takes off the masks that we fear we cannot live without… and know we cannot live within.” Fair warning for where Smollett wants to take us.

When 27-year-old journalist Mitchell from Brooklyn (played by Timothy Richardson) takes up with 21-year-old courier and hip-hop B-Boy Raheim from Harlem (Thomas Mackie), it’s clear their background, culture and class are gonna clash big-time. How long can love be blind? How long can they continue to work hard on being together?

The movie opens as Raheim is breaking up on the phone with his previous boyfriend who says, “I’m tired of being the bad guy. I got multiple degrees, seven figures, and a nine-point-one-inch dick, and you still not satisfied?!”

So, what’s it take to satisfy Raheim? He and Mitchell survive so many stages of their relationship: first date, meeting the friends, meeting the family, etc. until, finally, a couple of events rock them both beyond what they feel they can deal with.

They cop lots of well-intended warnings but, “If I’m gonna get fucked over, I might as well get fucked in the process, right?” There’s a logic there.

There are some wonderful sequences, especially confusing Blessed Assurance with Blessed Insurance, drawing swords over the use of the N word, and beautiful scenes with Raheim’s five-year-old boy, whose very existence brings home the question of his dad’s sexuality, eliciting a friend’s lovely line, “I warned you not to get too involved with Mr Fluid and his fluids!”

Smollett, who also wrote and performed some of the numbers on the soundtrack, uses music well. Like the hymn It Is Well With My Soul, which is used quietly and with shocking irony in the church scene where clearly no one’s soul is especially well.

Probably, the greatest scene is with the Aunt toward the end. “You had the Big Fight. And now you can’t get over him. You’re in love. Love don’t always come in the package you want but when it comes you better name it and claim it,” she says.

It’s exhausting, and you’ll glimpse your own relationship at times. But, as in real life, stay the distance, you’ll be so glad you did. Warning: Lots of smoking hot African-American guys. Watch the trailer on YouTube. (Unclassified 15+, 103 mins)

The effects of sudden, unrelenting fame are nothing new. Certainly, today fame is as much understood as it is sought, but there have been earlier instances of out of control fame and how it can be as damaging as anything Facebook has ever perpetrated.

Luchino Visconti’s masterpiece Death In Venice (1971) was based on Thomas Mann’s short novel in which an ageing writer, Gustav von Aschenbach (Dirk Bogarde), visits Venice and is obsessed with a young boy, Tadzio, whom he admires from a barely discreet distance set to the painfully haunting sounds of the Adagietto from Gustav Mahler’s Fifth Symphony.

Visconti went everywhere searching and testing for the pivotal role of the boy. Some audition footage remains. The boys are directed to take off their tops (much of the movie is set at the beach), look directly into the camera lens and smile. There’s Visconti outside a roomful of hopefuls and the voiceover says, with unintended irony, “Somewhere behind the door is a boy whose life is going to change forever.”

And, yes, the boy Visconti finally settled on was indeed very beautiful.

What follows is his story post-Visconti, post-Death In Venice, put together by filmmaker Kristina Lindström who also narrates. It’s told through interviews with Andresen and his partner, most of the cast and crew of the film who are still with us, and archival footage.

It starts with accounts of Visconti himself who comes across as obsessive, moody and a bit of a horror. One of the rules on set was that no one, cast, crew, or set visitor, was to make eye contact with young Björn who was, clearly, the property of the director. At no stage is there even a hint of impropriety, from anyone, but the gloves are off when it comes to describing the onslaught of media coverage that beset young Björn for a period of two years and stole pretty well the rest of his life.

At one stage, Andresen recalls being at an after-party where he says, “I could feel all these strange guys giving me metaphorical blow-jobs.” Then there was the overwhelming attention showered upon him in Japan, including the red pills Andresen recalled, “were meant to make me feel better”. To this day, there’s a very popular Manga character of a girl who dresses as a boy based on Björn.

One wonders what might have become of him had Visconti not found him. There are recordings of him playing the piano as a teenager and he’s extraordinary. And he still plays beautifully though, in his words, he’s haunted by “inner darkness”.

It’s ironic that Death In Venice remains a work of beauty and exquisite yearning, with Tadzio oblivious to von Aschenbach’s pain but Andresen is doomed to live it out for the rest of his life. And this was before the advent of social media. Watch the trailer on YouTube. (M, 93 mins)

A DISTANT PLACE At The Mardi Gras Film Festival

A gentle Korean film in which the relationship between two men gradually appears to be accepted by everyone, but that acceptance unravels as the reality of their love challenges some deeply held traditional values.

Jin (Kang Gil Woo) and his little girl Seol (Kim Si Ha) live on a sheep farm in South Korea where Jin works as a labourer for the owner and the owner’s daughter; both pretty well accept them as part of the family. Jin’s much younger boyfriend Hyun (Hong Kyung) arrives, and they plan to live together on the farm.

But things go awry when Jin’s twin sister turns up. Turns out Seol is actually her daughter, whom Jin has been raising because his sister had disappeared.

It takes quite an effort to untangle the characters’ relationships and writer-director Park Kun-Young struggles to clarify who’s related to whom and how – but once that settles into place it becomes all about Jin and Hyun and how they don’t fit into this traditional landscape at all. In fact, that peaceful emotional place where the men are simply themselves and in love is becoming more and more distant as the days pass.

It’s a self-conscious film, helped by minimal dialogue and, hence, subtitles, but hindered by the same thing as it’s not always clear what’s going on. The locations are simply stunning and beautifully shot, if bleak – an ideal setting for two guys very much in love but gradually feeling abandoned and stranded.

The director could do well to move the camera, instead of putting it on lock (albeit well-framed and the players well blocked) leaving the actors to do all the work – for many, many minutes at a stretch. Movies must move.

Though the issues are often seen in gay cinema, they’ve rarely been seen from a Korean perspective. Watch the trailer on YouTube. (Unclassified 15+, 119 mins, subtitles)

We know and love Darryl Stephens for playing cute screenwriter Noah in four seasons of Noah’s Arc, beginning in 2005. He also appeared on Two-And-A-Half Men, Desperate Housewives and season 2 of his latest show, B Positive.

In 2006 he played Andrew in the story of a male escort who recalls his romantic adventures with his two roommates and an older client in the movie Boy Culture by Q Allan Brocka.

Fifteen years later, Brocka has resurrected Boy Culture as a series of six episodes, each focusing on one guy’s confessions. In the intervening years the sex market has somewhat changed, adapting itself to the digital age and leaving seasoned escorts a bit out in the cold unless they can find their edge among the new competition.

It opens with Andrew (Stephens) leaving his boyfriend X (Derek Magyar) who goes back to sex work to be confronted by the fact he’s no longer young and sexy. Mind you, he’s now older and sexy. They’re no longer a couple, but Andrew and X keep sharing the house, making things quite unnerving for everybody.

Chayce (Jason Caceres) takes it upon himself to teach X how to be digitally savvy, but he’s got his work cut out for him.

Michael, an American travel columnist for The New York Times, often travels alone leaving behind his husband David but keeping in close phone contact. This time he’s just landed in Tel Aviv where, due to a misunderstanding, the unit he’s rented is not yet available.

It’s a bit awkward but the young guy who’s subletting the apartment is skint and quickly offers to leave so Michael can move in. He’ll stay with friends or sleep on the street. Michael offers to let him sleep on the couch.

It’s a fraught situation and plays out, perhaps not unexpectedly, but with lots of insight, humour and social nuance.

There are some nice twists and turns and the filmmaker always stays ahead of the audience. The film rests on the shoulders of John Benjamin Hickey as Michael, a solid Hollywood actor, known for The Good Wife and The Good Fight. The rest of the cast, mostly locals, are great, especially Niv Nissim as the young luckless landlord Tomer.

The film has a nice light tone weaving throughout the drama and works because of John Benjamin Hickey’s performance. Watch the trailer on YouTube. (Unrated, 89 mins, part subtitled)

A simple story about loving and staying safe from homophobia and HIV in Namibia, a republic in Southern Africa which gained its independence from South Africa in 1990 following the decades-long South Africa Border War.

Sodomy is still illegal and gay relationships are aggressively and publicly condemned. Against this backdrop, HIV awareness and gay rights campaigns fight a seemingly losing battle.

This film is part of their arsenal. It’s essentially an educational film, but it’s so engaging you’d hardly know. It was funded by ViiV Healthcare’s Positive Action for MSM&T (Men Who Have Sex With Men And Transgender). ViiV (say “Veev”) is a pharmaceutical company dedicated to developing HIV therapies, a 2009 joint venture by GlaxoSmithKline and Pfizer.

LGBTQIA+ people in Namibia need all the support they can get. This film is short, just an hour, but covers all the problems gays face there, not so much different from anywhere, really, but homophobia by any other name, in any other language, stills stinks.

Simeon (Simon Hanga) cooks and sells the street food of the region: beef pieces (or kapana) grilled on an open fire. He has sex with men but tells himself he’s definitely not gay. One of his customers, office-worker George (Adriano Visagie), is gay and out, but he is wanting more than casual one-nighters.

They first get talking in a bar, later hooking up. In the bar, they’re in neutral territory and more or less equals. Back on the street, things are different with both guys as much locked into their social status as their differing views on being out, whether by choice or not.

The film takes a close look at internalised homophobia, the family structures that reinforce it, and the nitty-gritty of HIV and safe sex – issues that affect both Simeon and George regardless of what label they’re currently wearing.

The message of the film is as relevant here as it is in Namibia. Most of all, it’s a charming romance. Watch the trailer on YouTube. (Unclassified 15+, 61 mins, part subtitled)