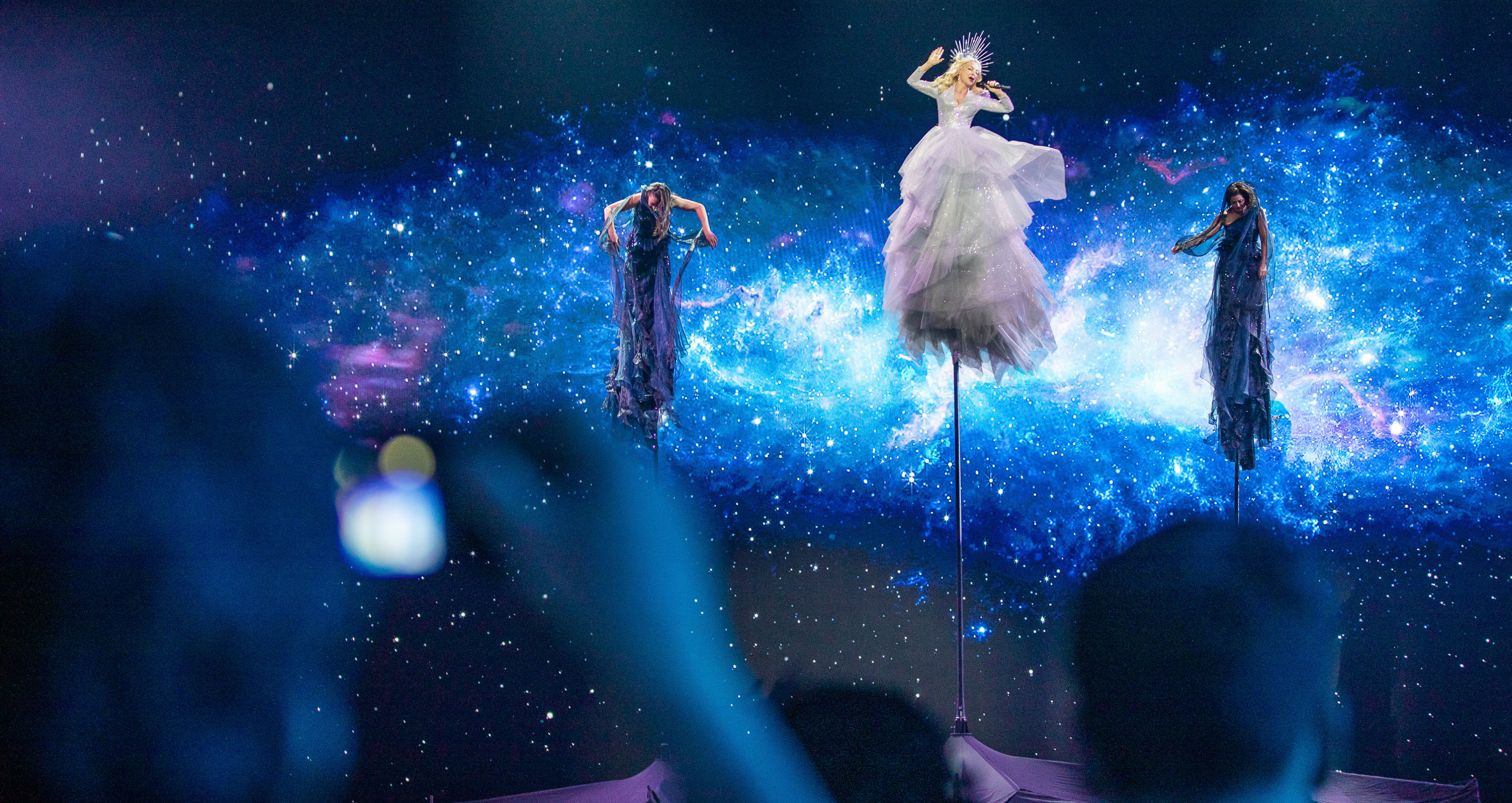 So what’s the view like from up there? Best view in the room. Although I don’t have my glasses so I’m mainly just trying to find the red light on the camera. The cheer as we get wheeled in is pretty incredible. It’s a good buzz. I recommend it if you ever get the chance.

The audience can see you waiting in the wings to be rolled on, do you feel their eyes on you and not on the delegation performing before you? Oh god I hope not. In Semi-Final 1 it was Georgia on before us, and did you see that magnificent spectacle? I’m sure people couldn’t tear their eyes away.

Press, fans and overheard murmurings through the streets of Tel Aviv all think ‘Australia’ is taking the trophy away from Europe, why do you think Zero Gravity has resonated so well? Well I don’t know about all that. I think the chances of Australia claiming the trophy are pretty slim. But the song does seem to have connected, and I think the staging has helped to really bring out the emotion of the song, There’s a lot of spectacle involved, but underneath it’s a song that expresses a deeply personal truth, and I think the world we’ve created in the staging really helps the audience connect with that, and takes you on the journey that the song embodies. Also, it’s three flying warrior queens in space. What wouldn’t resonate?

Do you think that if Australia wins, you break Eurovision? What did Leonard Cohen say? “There is a crack in everything. That’s how the light gets in.” Let’s smash it. Seriously, I think Eurovision can handle it.  Eurovision is all about crazy shit happening, right?

The new stage performance is next level realness (compared to Australia Decides). How involved were you in the creative decisions to progress the concept? I’ve been involved at every stage, right from the beginning, in a really satisfying collaboration with our creative director Paul Clarke and the amazing artists at Strange Fruit, led by their creative director Phillip Gleeson. After Australia Decides, we knew we wanted to step it up a bit, and someone drunkenly suggested me getting up on the pole, which seemed like a great idea at the time. The next morning, sober, it seemed absurd. We decided to give me a go on a pole, more so we could rule it out than anything else, as obviously it was going to be impossible. But as soon as I got up there and gave it a go, everyone involved just looked at each and went – well, that’s it. That’s what we’re doing, It’s been a process of all of us working together of the last few months to refine it and shape it into something that would work to support the song, which I think we’ve done.

Who are your favourites in the Final? I love KEiiNO from Norway (check our video of KEiiNO here)–what a great song, and the loveliest people. Obviously Hatari are brilliant artists and their song is actually a great pop song. They’re stars!

Who were you disappointed about not making the Final? I adore Tulia from Poland and was gutted they won’t be here. And my mind bogles that Conan Osiris from Portugal didn’t get through.

Will you scale Zero Gravity back to its acoustic roots for your more intimate gigs end of the month? Keep the tiara, retire the poles? Those 6 meter poles are an absolute bitch to get in as checked luggage, so I’m having them freighted home. They’ll be out of action for a few weeks. But obviously I’ll be having them at every show from now on. I’ll have to tour by car and strap them to the roof racks.

What’s your count on how many times you’ve sung it last two weeks? 2… 7… carry the 3… I think it’s about 16 official times in public and 182 in my hotel room. Sorry neighbours.

We love that you ‘Like’ and ‘Repost’ fans posts–does being approachable like that keep you grounded? I love seeing all the comments, I don’t take it for granted. And people can get really creative with their visuals, so I love reposting those. I’ve had trouble keeping up with the outpouring over the last few days so I’m sorry for anyone I’ve missed, but I really do appreciate it and I will see it all eventually.

Whatever do you do next in your career when you come back to earth? I start working on my next album as soon as I get home. I can’t wait. I’ve got most of the songs written, will work on a few more, and then hit the studio in a month or two. But immediately after the competition I’m on the first flight home to see my son Ernie who I miss almost beyond my ability to talk about it.

What message do you have for your LGBTIQ fans cheering you on at Eurovision? Thanks for your support, your visibility, your excellent taste and your strength. I respect and admire your community so much. Also, are you single? My manager is single and looking. He just asked me to say that. He’s really desperate.

Kate performs 24th in tonight’s Eurovision Grand Final. Catch it live on SBS Australia from 5am (AEST) May 19th. Purchase our special 64 page commemorative edition of DNA at Eurovision, featuring our interview with Kate.