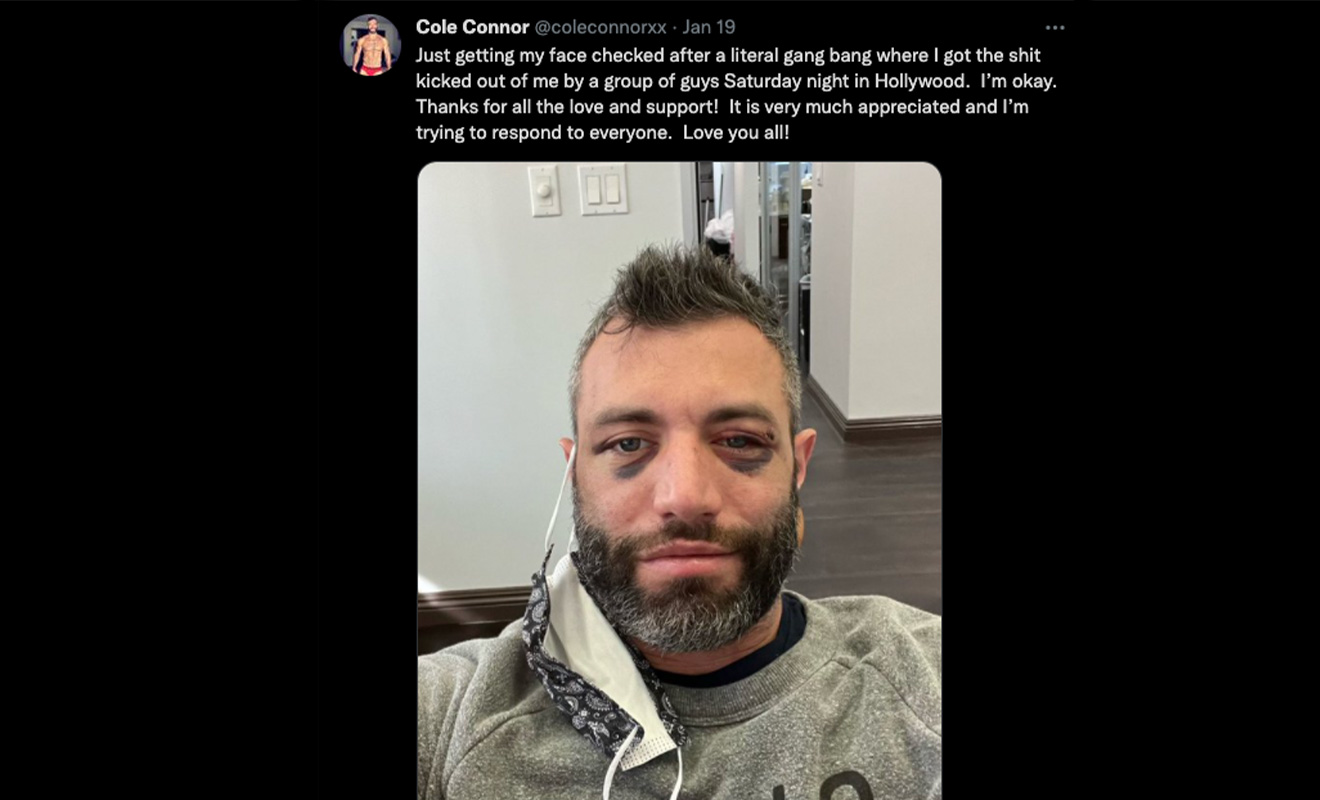 On Sunday morning January 16, the popular adult performer Cole Connor was beaten and mugged on the way to retrieve his ID from a car by a group of unidentified men. Connor has posted updates on his Twitter alerting his fans and loved ones of his progress post-attack.

Connor (a stage name) gained notoriety after creating an OnlyFans account in October of 2020. Since then he has signed an exclusive deal with the Falcon and NakedSword Studio, reports Advocate.

When Connor agreed to meet his friends out after a circuit party, he noticed that he had left his ID in a friend’s car. After leaving to find it he was confronted by a group of six men. “I go up to it and I can see my ID in the seat through the window,” says Connor. “There had been a bunch of guys hanging out in front of the car, and as soon as I open the door they like charged me and were yelling, ‘What the fuck are you doing in my car?’ ‘Get the fuck away from my car.'”

According to The Advocate, Connor says he isn’t sure if the attack was motivated by anti-gay sentiments as there were no slurs, but it felt random like, “they just wanted to beat someone up”. Luckily for Connor, a group of good samaritans saw the attack and drove over to help him escape while the men were preparing to use a baseball bat they had procured.

HE STILL HAS HIS SENSE OF HUMOUR

Although the harrowing ordeal will mean Connor needs surgery for an ocular fracture, paired with the various other bruises and sprains he is healing from, the performer is keeping his sense of humour about the situation even joking about it in a Twitter video.

In the above video, he says, “Ugh, haters man… They thought it was their car when I unlocked it with the key my friend gave me and then opened the door, they totally should have attacked me and almost killed me with a bat. I would have done the same thing, it makes perfect sense to me,” he laughs.

The updates from Connor are regularly streaming in and he assures everyone that he is doing okay now. The last post was published Monday, January 24 and to the delight of his followers featured him full-frontal nude with the caption, “Still here. Thanks for the love everyone!”