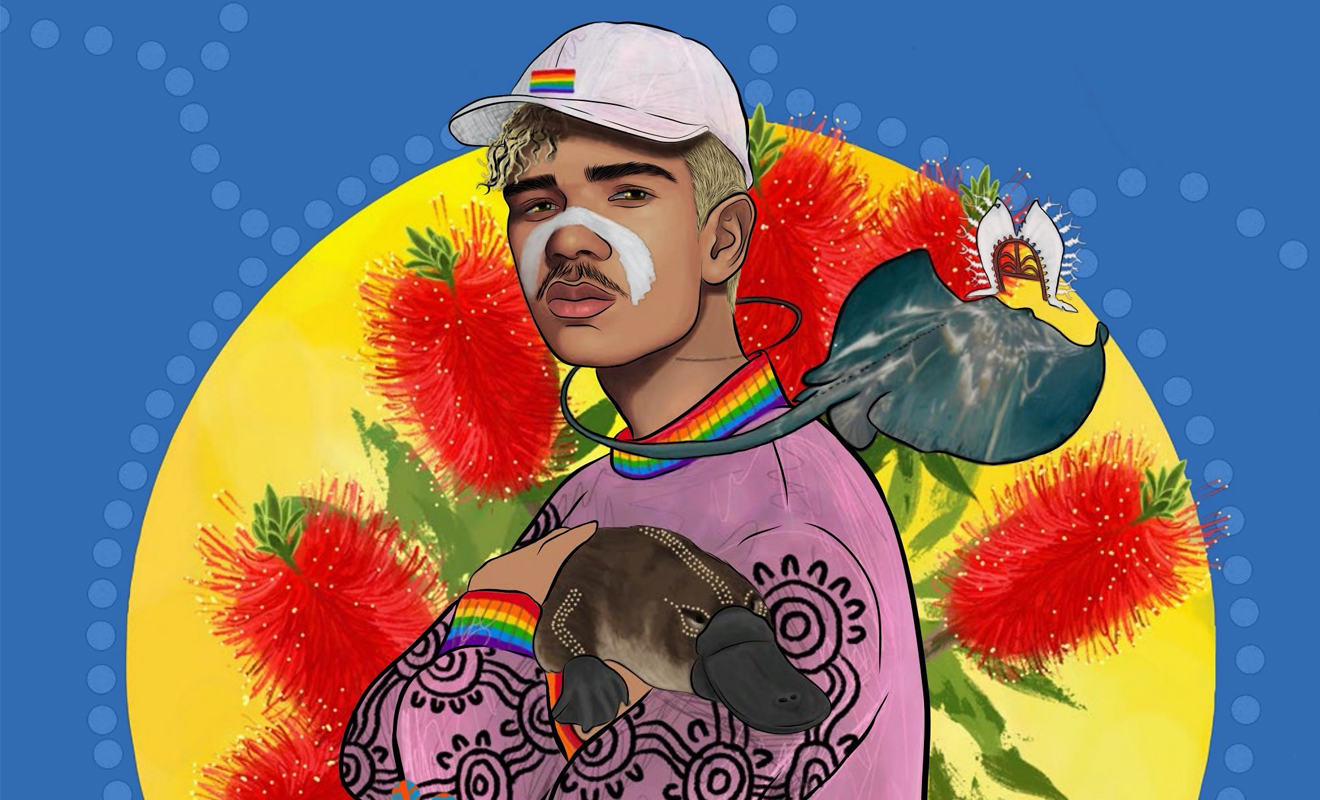 From Instagram to huge public murals, Indigenous identity, resilience and love are just a few of the colours in Dylan Mooney’s palette, reports Mike Hitch.

Art is his preferred medium, though.

“I’m not the best at doing interviews… not good with pressure in the moment,” he warns DNA, speaking a socially distant 900km away in Brisbane.

Dylan, 24, identifies as a queer Yuibera man from Mackay in Central Queensland and a Torres Strait Islander man from Badu and Darnley Islands. Many of his personal works show the pride rainbow flag dancing across the collars and sleeves of embracing Indigenous men. Other pieces draw on political motifs and family history, and themes of institutionalised racism and the mistreatment of the land.

“When I touch on queer or Indigenous identities in my work, I put myself into it,” he says. “What it was like for me growing up, and my experiences identifying as queer are normally present.

“I struggled with my identity growing up. When I hit university, I knew I was gay. I came out to my family and they were supportive, so it was a really positive outcome for me. Because of that, being proud of who I am and where I come from is important. I want to bring that positive reality back to the LGBT community through the people I draw.”

When it comes to creating public works, like the murals he is commissioned to complete, Dylan draws on his own history and a process of community consultation to find the stories that resonate.

“Anything people want to share about their life and history is incorporated. I get my inspiration from my family, my friends and the stories of my community, but when I go out and create a work, I listen to other people’s stories and what they have to tell. Their history, their lives – it all goes into the work.”

The experiences of Aboriginal and Torres Strait Islander peoples aren’t always something to celebrate, but Dylan resists sombre image making. Instead, he favours optimism. It may be highly charged, socio-political art but, he says, he prefers his work to depict the successes of the communities he represents.

Another feature of Dylan’s work is the inclusion of heavily symbolic artefacts – boomerangs, handcuffs and crucifixes, while painted faces and native Australian animals also recur.

In one notable example, an Indigenous man is shackled by the Australian flag as he prays to a glowing crucifix. The piece is captioned, “The people who gave us Jesus, gave us chains.”

Unbroken eye contact with the viewer is another striking and recurring visual trope. In some images it gives his figures a warm, friendly aura, inviting our gaze. In others, the figures stare back as if to say, “I see you… don’t look away.” The effect is as intimate, but more challenging.

“I want people to focus on the pieces and work out the stories behind them. It’s an interaction between the viewer and the artwork. Having the artwork stare back at you gives the sense that you’re looking at real people,” he says.

Indeed, this element gives us, the viewer, the chance to view the people depicted as intrinsically real and as embodiments of a resilient culture.

Perhaps the first thing most people see in Dylan’s work is the vibrant colour. Whether it’s gradually glowing hues, earthy Australian ochres or explosions of technicolour, Dylan says his palette comes from community.

“I try to use colours for their aesthetic and symbolic value… so a lot of white, reds, browns and ochres. The rainbow, of course, represents the queer side. I look at other artworks with dull colours and it just makes me depressed. I try to use a range of colours to reinforce that sense of positivity and resilience.

“Using colours for empowerment is important in my work. My focus is on youth, both Indigenous and queer, so it’s about telling this story, about how we are the next generations, that instinct for survival, and what we’ve managed to overcome.

“Both the Indigenous and queer communities have gone through so much and just to see us now, how far we’ve come and what’s in store for the future. That’s what I’m trying to show with colour.”

While Dylan is grateful for his ever-growing following among “white gay Australia” his work remains authentically true to himself and, he says, his distinctive use of colour is evidence of this.

Why is white gay Australia so attracted to Dylan’s work? Could it be the gorgeous, young men in romantic embrace? These dreamy leading men are composites of Dylan’s imagination and people he actually knows.

“I either use the face of someone I know or I make it up. I’ll get someone I know and then change it the way I want to make it attractive,” he says with a laugh. “Some of the characters in my work I have absolutely based around myself and my partner. Especially the ones of us embracing. That’s meant to represent me and him. I try to portray that sort of happiness with gay couples in my art. We don’t see it often.”

An ancient culture, modern loves and digital technology all play a part in Dylan’s evolving body of work. He began his artistic career, drawing, at 19, then later moved on to digital art due to its comparative ease and user-friendliness. However, he notes that each medium has its strengths and weaknesses.

“Paper takes forever and it’s always getting messy. Digital art is way faster and works so much better when I’m working with organisations that I do commissions for. There’s a real market for digital illustrations these days. A physical drawing on paper is more of an exhibition format; it’s a bit more personal.”

Regardless of the medium, Dylan is most concerned with the “personability” of every project – especially when creating one of his impressive community murals.

“Organisations give me an initial brief about what they want to see, but if I’m doing it for a community then I want to do consultations. What do they want to see on it? I bring in younger people – it’s about giving young people agency over the work to tell their stories because they’re the ones who it represents. It’s kind of easy from there. I try to make the work not about myself when I’m doing murals.

“My art is a way of connecting with young people. Giving them something to look up to and – not to sound like a dickhead – light the way for them. Some people have a problem with me wanting to connect. Some don’t.”

Every artist, especially those who interact publicly through social media, experience criticism, and Dylan is no exception. Initially, when he started to incorporate his queer identities into his art, there was a backlash from some followers on social media. But he believes that his success now sends a message to the effectiveness of honest work.

“There’s always people who don’t like your art,” says Dylan. “Especially when I started doing art that was openly queer. There will always be people who have something to say.

“I think you either like art or you don’t. I started doing art in high school and didn’t get noticed until I was 20, so I’ve had long enough to understand that it’s not really about other people. I mean, look where I am now. I’m making money, and I’m going places.”Magpie Crusaders football jersey design.

Longterm, Dylan is interested in going global (after pandemic restrictions lift, of course), but right now, his heart is more interested in continuing to explore Australia because the concept of “Australia” is at the crux of his art.

The platypus is especially important to Dylan. Whether it’s painted in a glowing silhouette or nestled next to one of his handsome figures, the unique mammal is not just a prominent part of Dylan’s artistry, it’s also part of his identity.

“I use the platypus because that’s my totem. To me, it’s a spirit guide, and it looks after us. We care for it as well when we’re on country. It’s why I want to get more into environmental issues, such as climate change.

“I haven’t talked about climate change much in my work. I use country for the background, which you can see, and I’m showing the connection to home and the land that I come from, but it’s something that I want to start taking more seriously now that I have, I guess, a bigger platform.”

Dylan believes people can appreciate his work simply for its aesthetic qualities, but he’s also ready to take the plunge into a more activated art space.

“That’s what art does. It talks about society, politics, protest… mental health issues. That’s probably what art should represent now, and I think people should be able to identify with art in that way. I hope I can influence other people and create some change within Australia. I hope people feel empowered. Yes, I want to get more political with my artwork… I also hope that people will look back and think, ‘He did really cool art.’”

As for Dylan’s more immediate plans?

“I want to go back down to Sydney and finally do a Mardi Gras. I’m not travelling around a lot right now – if you hadn’t guessed – but I’ve never been to Mardi Gras, so I’d really love to see that at some point. Maybe do some art? Sydney and Melbourne are definitely more high-end in the art scene, though. Well, maybe I can show you guys how we do it up north!”