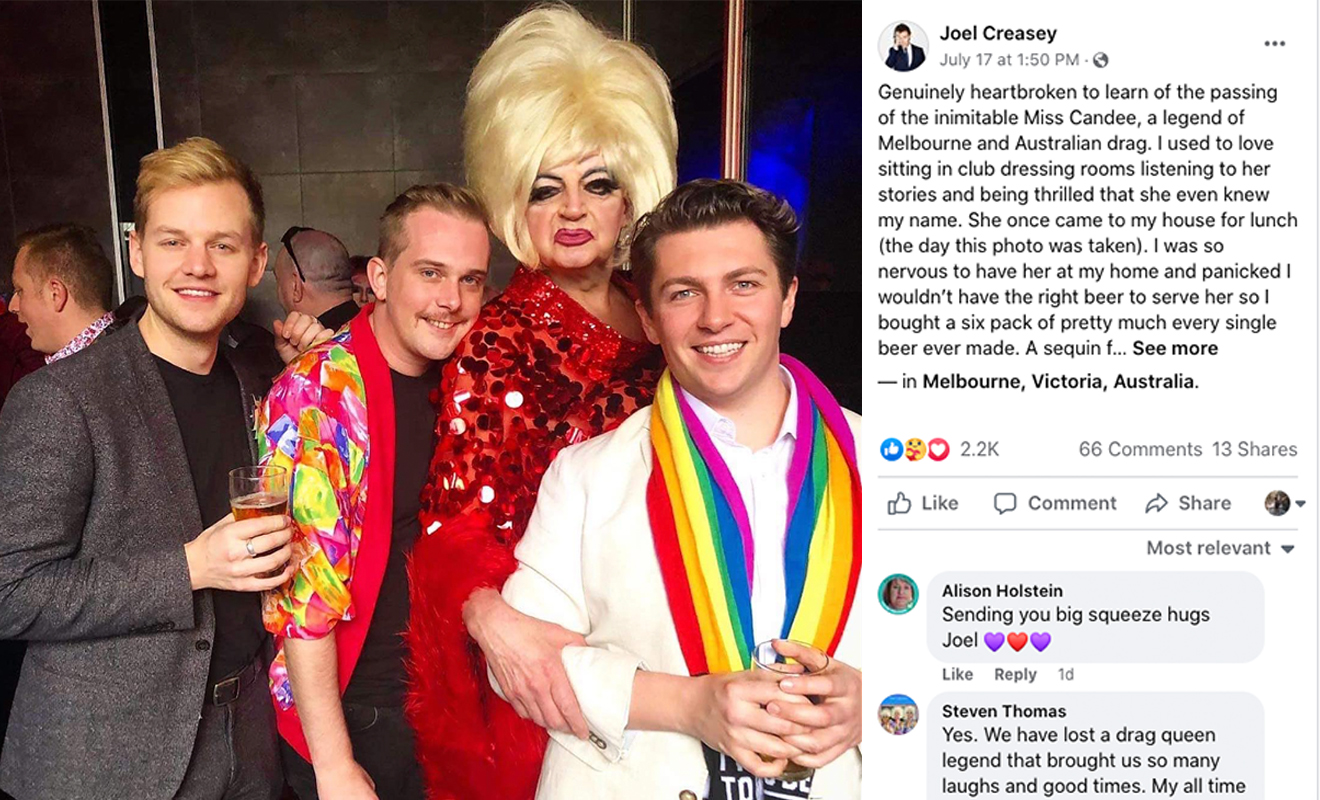 Joel Creasey and Miss Candee with others (Screencapture via Facebook)

On Saturday, July 16 the beloved drag queen Miss Candee died at the age of 68. The performer was a staple of the Melbourne Arts scene and is remembered by all as a true friend and an icon, reports The Age.

A LEGACY OF LOVE AND LAUGHS

Miss Candee, whose real name was Ron Walker, led a life that rivals any legend having worked for over 48 years as an entertainer. Walker first began performing in drag at the age of 21 and is remembered for being a true star and somebody who never failed to entertain, reports Star Observer.

Miss Candee had a regular show called Divas at DT’s Hotel in Richmond where she performed alongside drag queens Suzie Ridge and Laura Gravity, reports The Age. Miss Candee was one of the first ever drag queens to perform at the Melbourne International Comedy Festival in the ’90s.

According to Star Observer, Walker had been admitted to the ICU prior to their death following two life-threatening surgeries for an unknown infection in her lower back and spine. The GoFundMe set up to help Miss Candee with medical bills raised $30,000 AUD in a handful of days; a testament to the love the seasoned performer inspired.

Since DT’s Hotel posted the news on social media, a flood of tributes has flown in from celebrities, drag queens and adoring fans.

Celebrity comedian Joel Creasey wrote on Facebook, “Genuinely heartbroken to learn of the passing of the inimitable Miss Candee, a legend of Melbourne and Australian drag. I used to love sitting in club dressing rooms listening to her stories and being thrilled that she even knew my name.”

Fellow performer and close friend Barbra Quicksand, aka Shane Tonks, says, “He was an incredibly well-groomed and well-presented man. Very quiet and softly spoken and yet [alter ego] Candee was outrageous and raucous. But he loved performing. He made his own costumes and took enormous pride in that.”

Walker’s legacy as Miss Candee will live on in the hearts and minds of those whose lives were touched by the icon and legend.