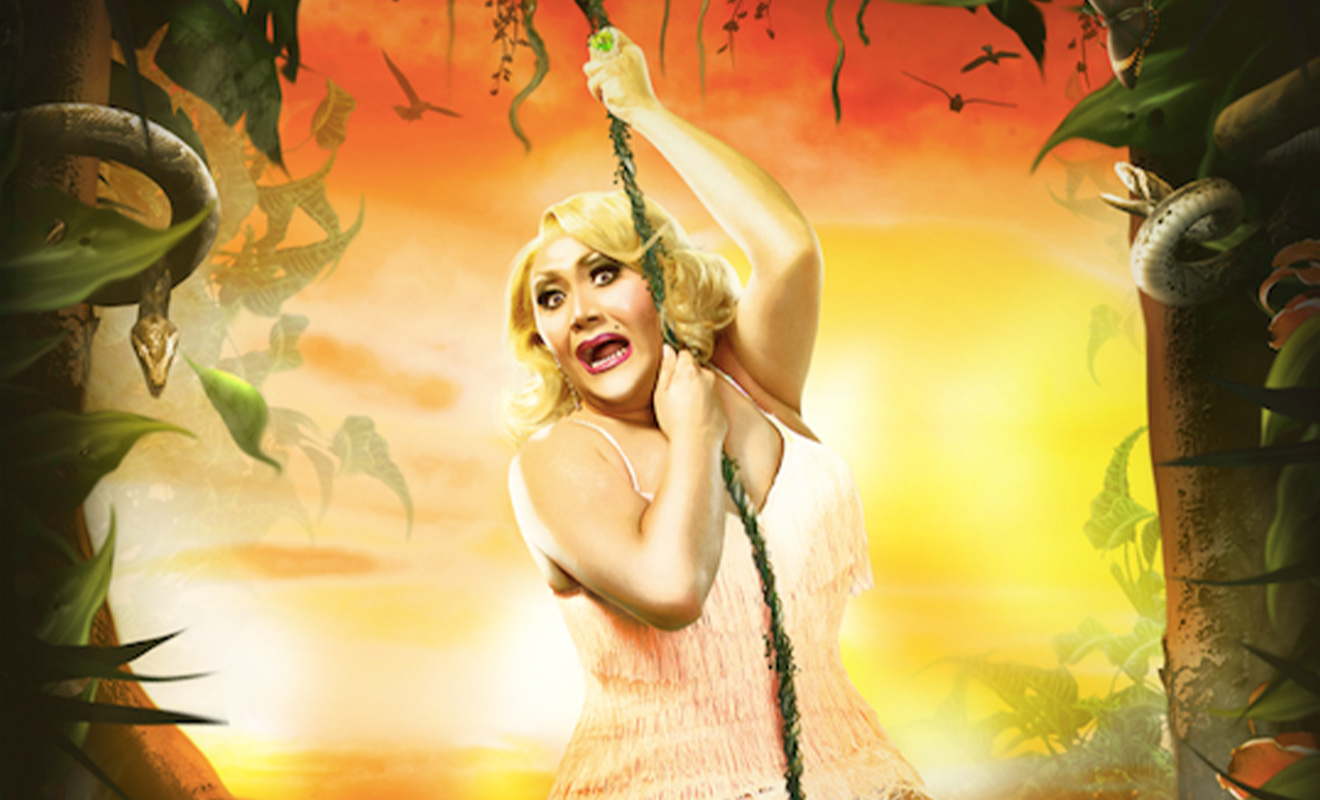 Eight years ago, Trevor Ashley magic-ed the hilarious Fat Swan onto the stage. We’ve had Little Orphan Trashley and The Bodybag since, becoming a Christmas tradition. This year it’s The Lyin’ Queen!

The show is set on a tropical island off the Queensland coast with ferocious, and possibly genetically engineered, beasts. When eccentric billionaire Dr. Richard Rabbitborough (Phil Scott) invites Gaye (Trevor Ashley) to return home from Los Angeles to star in the commercial for his new theme park, she can’t resist the opportunity (or the money).  But when a huge electrical storm hits the island, things quickly go downhill, not only for Gaye, but for newly escaped attraction King Schlong who threatens to ravage everything and everyone on the island.

DNA sat down with Ashley to talk about the show.

DNA: Do you look forward to your Christmas panto as much as your fans do?

Trevor Ashley: Always! They truly are the most fun I have all year as they’re so politically incorrect! I love to hear an audience gasp when I’ve gone too far…

Oh dear, too many to mention. Some of our Whitney Houston jokes in The Bodybag managed to shock people. Too soon?

Tell us about The Lyin’ Queen.

It’s is a mash-up of many disaster movies – think Jurassic Park meets King Kong meets musical theatre. I play Gaye Wray from Home And Away, a soap actress who is whisked north to become the face of a theme park off the coast of Queensland. Of course, everything goes wrong. Our star gorilla escapes and ravages everything on the island, including Gaye.

There’s going to be some gorilla action?

Yes, there are many wondrous animals living in the park including a giant T-Rex affectionately known as Trevor. Unfortunately, you don’t see much of our gorilla, King Schlong… only his biggest asset.

Who is in the cast… Actually, who is the hottie in the cast? There’s always one and that’s what we really want to know!

The gorgeous and talented Brendan Irving is starring with me. He starred as Rocky in The Rocky Horror Show and has been known to grace the pages of a Paul Freeman book or two! Not only that, he’s an aerial performer, so expect to see him swinging from some vines…

Are we getting him shirtless?

Absolutely. It’s my Christmas gift to you all.

I have a horrible feeling the trapeze might chafe if that happened.

The shows are always so light and bubbly but it must take some serious writing to cram as many jokes in as you do?

Phil Scott and I have been writing together for 15 years now.  We are a tough audience, so if we can make each other laugh, then we know it’s going somewhere. The hardest part is that we have to leave it so late to write to be topical.

You’ve met and worked with some amazing artists over the years. Who stands out?

Gosh, I really have had an amazing career in that way. Singing with Eurovision winner Conchita Wurst is one of the highlights. I think he’s incredible. One of my first gigs was entertaining at Russell Crowe’s New Year’s Eve Party; that was a blast. And all the amazing people I have shared a stage with in musical theatre, from Marina Prior to Millsy!

You recently went on your first Tindr date. How did it go? Will you be going on more dates?

Oh look, I’ve stayed out of dating for quite a while now… so getting back on the horse was rough. It probably wasn’t the greatest match but I’m persevering. I’m hoping that maybe Mr Right is out there. I’m turning 40 soon, it’s time to settle down! Isn’t it?

Ashley’s hilarious new adults-only show opens at the Sydney Opera House on 26 November for a very limited season. Demand for tickets has been high so this riotous romp will transfer to the Eternity Playhouse as from 10 December for 13 performances only.  Expect ridiculous puppets, song parodies, and more out of date politicians than a Liberal party fundraiser.

Tickets are on sale now through the Darlinghurst Theatre website.