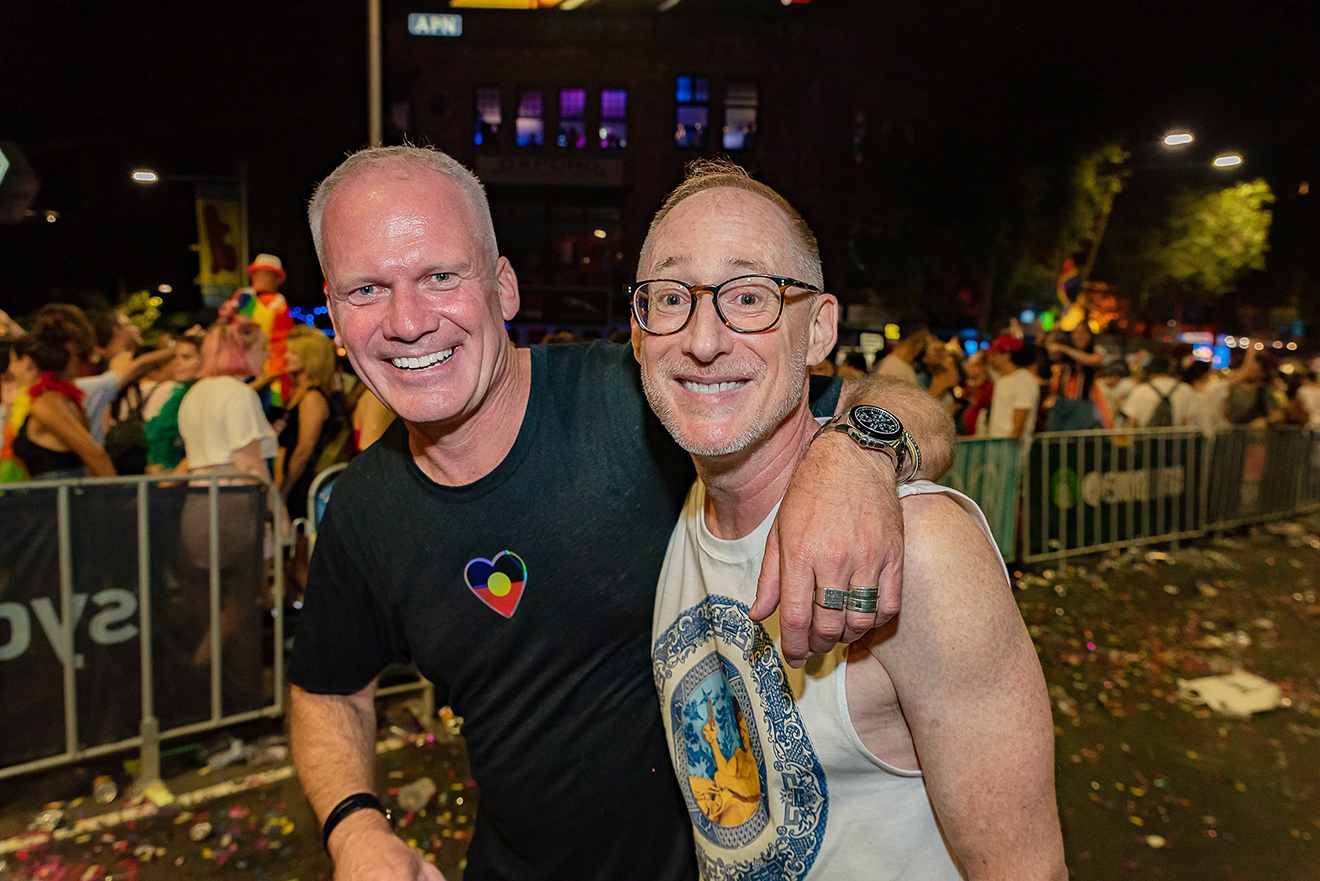 I’ve seen a lot of Pride parades around the world and, at the risk of sounding parochial, I think Sydney’s Mardi Gras is still the best, largely, because it happens at night.

I don’t know why other cities stage their Pride parades during the day. Here’s four things that don’t look good in bright sunlight: leathermen in buttless chaps, drag queens, topless dykes, go-go boys. They all look fabulous under the kinder, artificial light of night, but midday sun is pretty unforgiving.

Also, a night-time parade means you can use great lighting effects on your float, and construct costumes that have built-in lighting effects. A night parade means you can set off fireworks along the parade route, and capitalise on lights and lasers bouncing off sequins, glitter and mirror balls. The warm glow of a fake tan, body paint and make-up are complemented by night lighting, creating a more theatrical feel. Lights, music and choreography all work better in the cool of the evening, rather than during the scorching heat of the day. And no sun-screen required at night!

Sydney’s parade also seems to be getting bigger, brighter and more colourful every year (see our photos from the Parade and Party in DNA #231). There was a fear that 2019 would pale a little after the Cher/marriage equality/40th anniversary spectacular of 2018. But it didn’t. Not only was it glam from start to finish, the celebratory vibe was sensational.

At the end of the Parade, as Taylor Square filled with mostly young people, the crowd spontaneously burst into a rowdy rendition of Bohemian Rhapsody. It was quite extraordinary and felt like a natural expression of love and support for our community. I have to admit, I splished! I was with my friend Virginia, a lesbian of my own vintage, and she observed, “One day, this generation woke up and thought, ‘I know gay people, there’s nothing wrong with them, and I’m going to celebrate with my gay friends.’”

She’s right. This sort of acceptance didn’t exist when she and I came out, and I think that’s why I found it so moving.

The Parade, as always, reflected Australia’s multiculturalism but, this year, I was struck by two particular marching groups. First, the Indonesians. Right on our doorstep, LGBTIQ Indonesians are facing the terrible prospect of consenting gay sex between adults becoming criminalised as part of a religiously inspired review of the nation’s laws. Secondly, the Chinese Community Marching Group, representing the millions of LGBTIQ Chinese whose existence is becoming increasingly marginalised through censorship.

Our community visibility is what makes every city’s Pride parade – whether in the day or night – an extraordinary event. New York is currently gearing up to celebrate the 50th anniversary of Stonewall, the event that inspired the modern LGBT civil rights movement, and our feature in DNA #231 reviews what’s new in New York. We also get to the bottom of what happened to Beirut’s fledgling Pride event last year, why authorities tried to close it down, and what they have planned for this year.

Our Mardi Gras may sometimes look like a frivolous expression of little more than glitter and G-strings, but the images of our celebrations send a powerful message around the world. To LGBT people living under oppression, it’s a message of hope for a brighter, freer world. For the governments and institutions who persecute, it’s a sign that global change is on the way and it is unstoppable.

Wherever you are, enjoy the LGBTIQ rights you have, and continue the fight for those who have less.

Read this story and more in the current issue available from the DNA store.