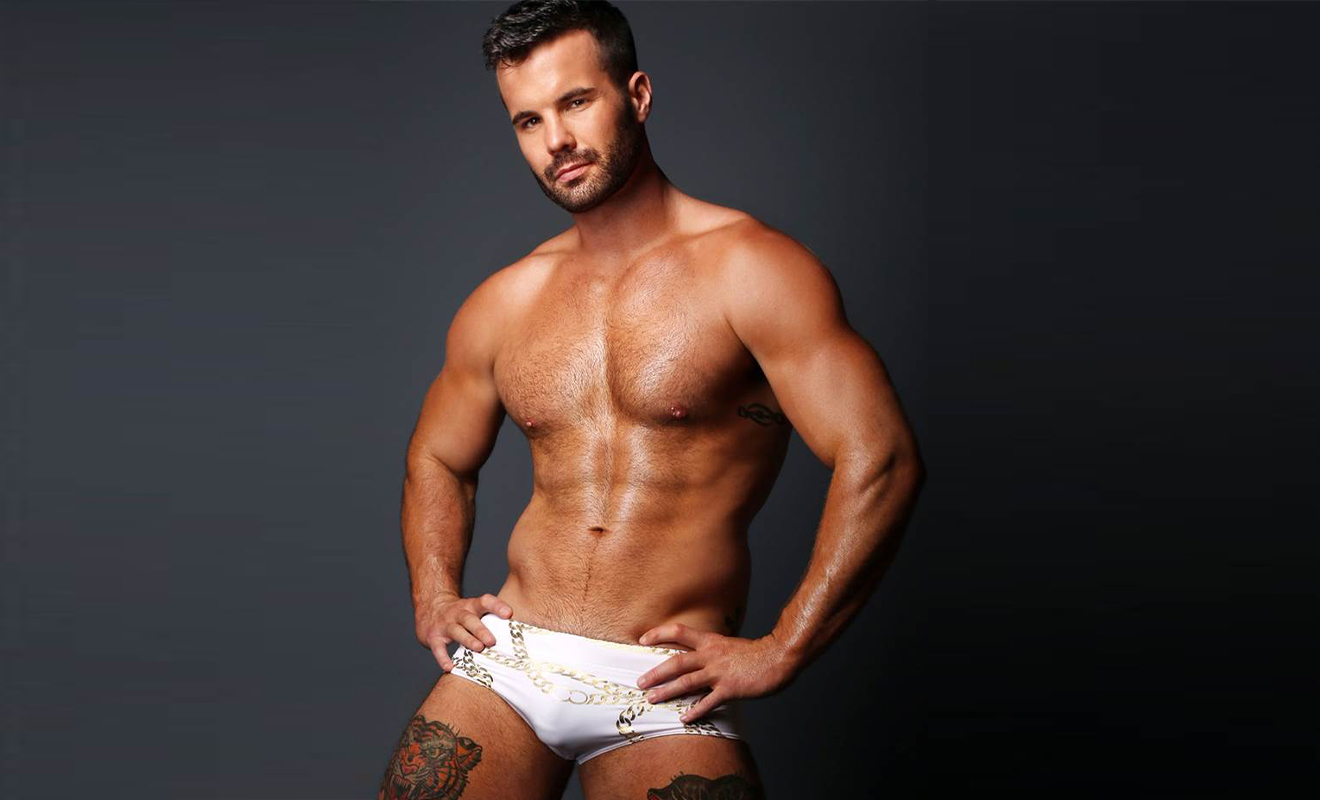 Simon Dunn, the Aussie athlete and LGBTQIA+ activist we love putting on the cover of DNA, caught up with us recently to chat about the Winter Olympics, coming back to Australia and becoming an ambassador for the inaugural P&O Pride Cruises. Time to go cruising…

DNA: Simon, you were training with the Australian Bobsleigh Team for the Winter Olympics in Calgary but had to return home injured. What happened?

Simon Dunn: I headed over to Calgary in September last year to further my training with the intention of re-qualifying for the national team in the Olympic season. This gave me the opportunity to race for Australia in both 2man and 4man races in Whistler, Canada. It was in the second race of 4man where we had a crash at roughly 140km per hour. During the crash I had to pull myself back into the sled in an attempt to keep my head off the ice which, unfortunately, ruptured my bicep, tearing it from the bone.

Ouch! So, no Olympics for you this year. What does it mean for your bobsleigh aspirations going forward?

I’ve been involved in bobsleigh for almost eight years, so it’s a case of never say never with continuing. I’d love the opportunity to get back in the sled and represent my country again, as well as help the sport develop in Australia. But when it comes to trying to make the Olympics in 2026, I’ll be 38 and I’m not sure my body will appreciate it, nor will my bank account.

As you recover, how are you spending your time? Are you still personal training?

The recovery time for bicep reattachment surgery is, unfortunately, a long one, so I’ve spent a lot of time at the physiotherapist. I’m six weeks out from my operation and I’m not allowed to lift more than a 1kg, so this has ruled out personal training for me for the time being.

Now that you’re back in Sydney, have you caught up with your old teammates from the Sydney Convicts?

Definitely! There’s been a few social opportunities to catch up with The Convicts. This year is 10 years since I joined the club and the start of my sporting journey, so I have a lot to thank them for. They also managed (over a few beers) to convince me to have a run this year (once I’ve recovered) and play in the Bingham Cup this August in Canada.

You’re involved with The Bobby Goldsmith Foundation. Describe what they do and how you’re a part of that.

The Bobby Goldsmith Foundation is Australia’s longest running HIV charity. BGF provides support for people living with HIV, which includes practical, emotional and financial support. My role as an ambassador varies greatly and with being an ally for the HIVpositive community there’s an emphasis on breaking down the stigma around HIV. I’ve been able to speak with companies like Woolworths and Lion Nathan for World AIDS Day, working with P&O Cruises Australia on events to raise money for BGF on its Pride Cruises. For me, the most rewarding part of my role with The Bobby Goldsmith Foundation is being able to get out and work directly with their clients, being able to meet first-hand and hear the stories of those that BGF have been able to assist, some of which has been eye-opening but also very educational. It’s invaluable to hear about my community.

Since you last spoke to DNA, a lot of professional athletes have come out: A-League soccer player Josh Cavallo in Australia, American football players Colton Underwood and Carl Nassib, and there were over 180 openly gay LGBTIQA+ athletes at the Tokyo Olympics. Are we making progress?

It’s great to see more athletes coming out and more importantly athletes being comfortable to do so. As I’ve always said, its at grassroots level where the change really needs to happen. LGBTQIA+ athletes need to feel comfortable to continue in sport. Seeing Josh Cavallo coming out and speaking out against homophobia is great, he could’ve just come out and continued playing but instead has been vocal about change. This will do a lot for sport!

The next Gay Games are being hosted by Hong Kong in 2023, covid allowing. But Hong Kong won the games before the crackdown on the democracy movement happened. Do you have an opinion on whether Hong Kong will still be safe for LGBTIQA+ athletes?

I feel the organisers have already shown they’re doing what’s needed to ensure the safety of athletes by delaying the games until 2023. With covid, and obviously the civil unrest in Hong Kong, I can’t imagine how difficult it would be to organise an international event during these times. Delaying shows they have the best interests of participants at the forefront.

You’re ambassador for the P&O Pride Cruises that are leaving Sydney in November and Melbourne in December 2022. What can we expect onboard?

I’m so excited for the Pride Cruises. There are two cruises scheduled in 2022, one scheduled to depart Sydney in November and another leaving Melbourne in December. These will be weekend, three-night cruises, and in 2023 we will be continuing the fun from Auckland, Sydney and Brisbane. In 2022, I’ll be joined by the lovely Etcetera Etcetera from Drag Race, Coco Jumbo and DJ Victoria Anthony. I’ll be a very busy man onboard with lots planned, from DJing the pool party, hosting events, and also a fundraiser boot camp for The Bobby Goldsmith Foundation.

As the cruises don’t leave Australian waters, do we need our passports?

There’s no need for a passport as we don’t leave Australia (except for the Auckland cruise, obviously) all you need to bring is a government issued ID.

Are there going to be nightly themed parties? We need to start thinking about outfits!

Yes, and I am helping P&O to plan these! P&O are renowned for hosting some exciting theme night events on all of their cruises, including The White Party and Gatsby. The Pride cruise will be no different.

Have you been on an all-queer cruise before?

Unfortunately, I have never been on a Pride Cruise. This will be my first cruise ever so notching up five in a row will be fun!

How many people will be onboard?

In a previous interview you told us that despite your bobsleigh training, you don’t actually enjoy being in the cold. You prefer it hot. What are you most looking forward to on the Pride cruises?

I can’t wait to share this experience with so many people, make new friends and just enjoy all the cruise has to offer!

Some people on cruises like to dress up for dinner. Is that you?

It’s rare that I get to dress-up so I take advantage of every opportunity to do it! There will be several events on the cruise that will allow guests to dress-up, including a gala event for The Bobby Goldsmith Foundation.

Do you have any tips for packing? Obviously swimwear and partywear… what else?

Remember there’s many different events with many different outfit choices. P&O recommend no more than two bags per person so fill those bags with whatever you have to dress to impress!

ALL ABOUT THE P&O PRIDE CRUISES

P&O Cruises Australia will be flying the rainbow flag in 2022, with the launch of its first Pride Cruise – a celebratory weekend at sea created especially for members of the LGBTQIA+ community, their friends, family and supporters, departing Sydney on November 4th.

Joining P&O Cruises on the new sailing will be a raft of community organisations that support the LGBTQIA+ community through health, well-being and social initiatives, such as The Bobby Goldsmith Foundation, Harbour City Bears and Queer Screen, which will showcase its first Queer Screen at Sea Film Festival.

Following on the from the success of the launch of the inaugural Sydney cruise, the cruise-line announced four additional Pride Cruises in 2022 and 2023, with a Melbourne Pride Cruise departing on December 9th 2022, and cruises from Auckland, Sydney and Brisbane in 2023.

The home-grown cruise line has also partnered with some of the best names in the Australian entertainment business including talented artists who are champions of equality, such as drag stars Etcetera Etcetera and Coco Jumbo, and DJ Victoria Anthony, who will all perform on the Pride Cruises in 2022. Many more guest performers and entertainment, plus the all-important theme nights, are still to be announced for the 2022 and 2023 cruises!

P&O Cruises Partnerships Manager Chris Rich said the sailing would welcome everyone who is a member or supporter of the LGBTQIA+ community.

“Guests will be able to celebrate the themes of love, compassion, respect and understanding through lectures, educational and spiritual events, rainbow family events, and we’ll offer same-sex marriages and renewal of vows. There’ll be something for everyone – as well as the unique blend of love and laughter that makes the LGBTQIA+ spectrum so special.”

The Short Break Pride Cruises will host up to 60 onboard activities every day of the two days at sea of each cruise.

Pacific Adventure is due to arrive in Australia in 2022, with a range of new restaurants, bars and other exciting features including Byron Beach Club. Guests can challenge their family, friends and new-found friends on Pacific Adventures’ Twin Racer Waterslides.

You can visit P&O Cruises to find out more information on their Pride Cruises now.