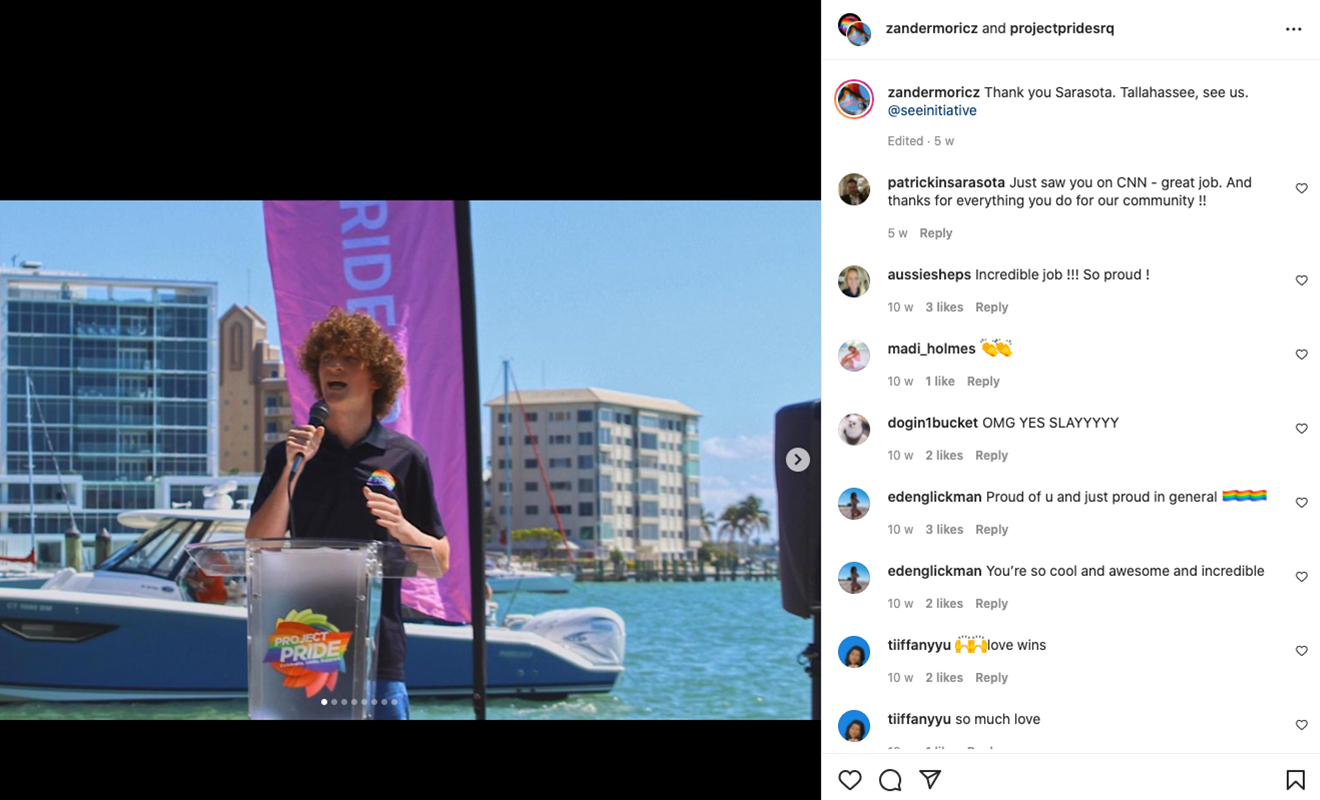 The homophobic Florida legislation known as the Don’t Say Gay Bill will come into effect in July, but educational facilities are already censoring LGBTQIA+ content in schools. High school senior Zander Moricz was warned against mentioning his activism efforts in his graduation speech as class president, reports Advocate.

WHERE’S THAT FREE SPEECH AMERICANS ARE SO PROUD OF?

Since Governor DeSantis approved the Don’t Say Gay bill, the US has catapulted the conversation about LGBTQIA+ rights to the forefront. With states across the US introducing similar legislature, it is more relevant than ever for queer activists to unify.

High school senior Zander Moricz is the first openly gay senior class president in Pine View School’s history. He is also one of the public plaintiffs suing his home-state of Florida over the Don’t Say Gay bill, reports Advocate.

As class president, he is provided the task of giving a speech at the graduation ceremony for his school. Presumably, Zander’s considerable activism efforts would be the perfect aspirational material to draw from for such a speech. Moricz’ school principal, who he admires, has warned him against mentioning anything with LGBTQIA+ content because of the new law.

“It was so shocking, as I know that I believe that as a human being, Dr Covert [school principal] is someone who would support what I’m doing and support these rights,” says Zander. “This law is so effective in turning people into vehicles of oppression that he was unrecognisable in that meeting.”

According to WUSF, the Sarasota School District instructs educators to review all student speeches. Although the Don’t Say Gay bill is not in effect yet, the administration at Pine View School allegedly instructed microphones to be switched off at any mention of LGBTQIA+ activism during Zander Moricz’ speech.

“It felt dystopian because I had to sit there and listen to someone tell me – and I am the first gay class president, and this makes it incredibly clear as to why – that a discussion about who I am and the fact I am who I am is okay would be an inappropriate thing for school,” says Zander.

This is just one incidence, with many to follow when Don’t Say Gay is enforced in July. Students, educators, parents and activists are already being silenced. It’s the deliberate effort to remove queerness from view and the results are effective.

It shouldn’t be the sole responsibility of younger generations to correct the mistakes of their predecessors. It is heartening to witness brave students and activists like Zander standing up for their right to express themselves.