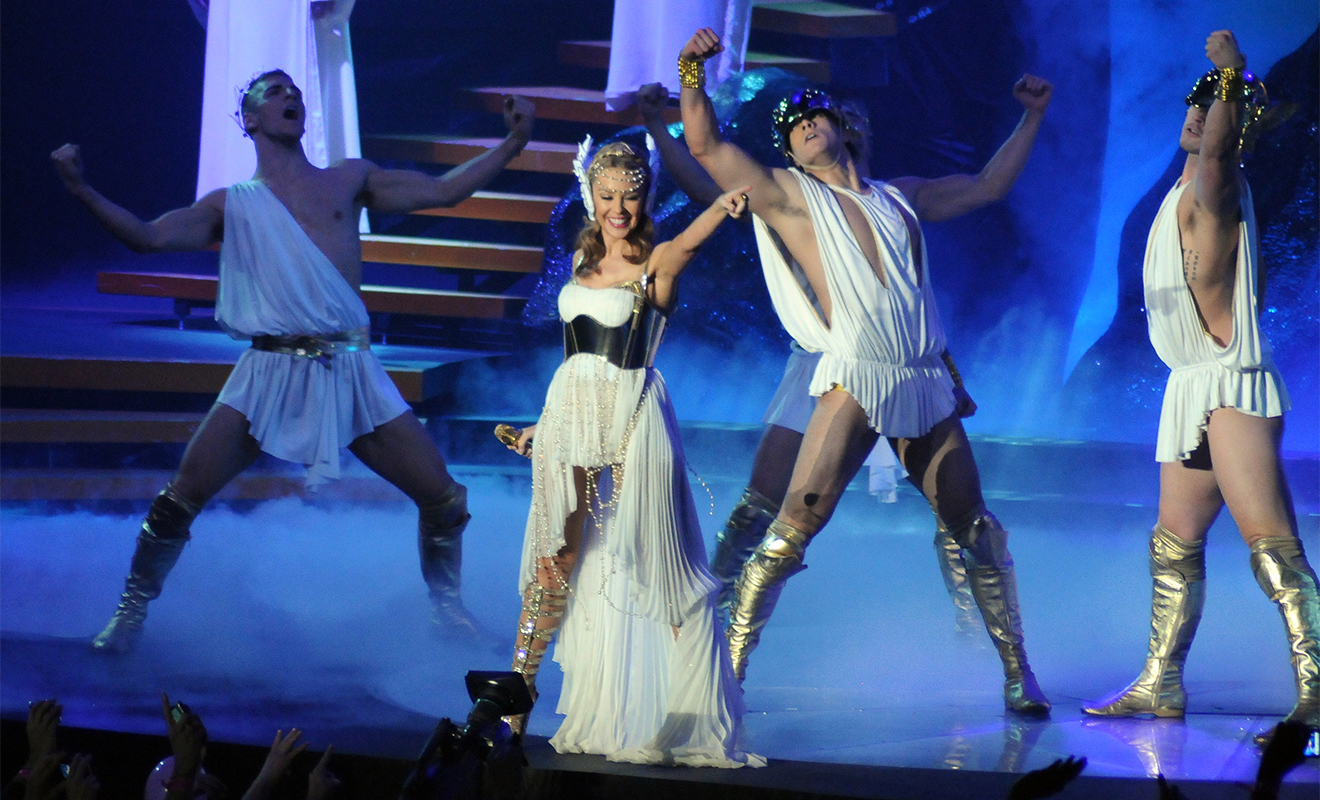 Australia’s Princess Of Pop, Kylie Minogue, has been a gay icon ever since she released her first single, Locomotion, 35 years ago in 1987. DNA’s Marc Andrews, who has just written the Kylie: Song By Song book covering her extensive and extremely gay-friendly career, uncovers at last her ten gayest moments! Lock up your feather boas, wigs and speedos!

Back in 2000 the “pink £/$” market was not considered of mainstream interest. So this truly camp fest co-written by Robbie Williams, which sounded like Pet Shop Boys on steroids, never got the proper single release it deserved. They still don’t come any gayer than this!

When you’re making a movie version of the campest TV sitcom of all time, Absolutely Fabulous, who you gonna call to belt out its familiar Bob Dylan theme? Ab fab Queen Kylie! Not surprisingly Kylie was a fan of both Jennifer “Eddy” Saunders & Joanna “Pats” Lumley.

KyliexABBA have long had a super trouper of a thang going on. Besides warbling ABBA’s signature tune Dancing Queen at Sydney’s 2000 Olympics Kylie and her sister “Disco Dannii” did a hi-NRG take of The Winner Takes It All for queer TV series Beautiful People.

While the song Slow itself, a slinky #1 from Kylie’s adventurous Body Language album was decidedly minimalist electro, the video was definitely minimalist lycra with more speedos packed in it than a year’s worth of DNA cover shoots. We still get hot and bothered by it!

The title track to her millennium comeback, Kylie’s then record company considered this cabin crew-loving affair too “pink” so it was side-lined as a single. Yet when Kylie mashed it with Donna Summer’s disco classic I Feel Love live it couldn’t get more gorgeously gayer.

The most timeless of her Stock Aitken Waterman era hits and performed live at 1998’s Sydney Mardi Gras, Better The Devil You Know has become a true gay staple over the decades. Kylie later duetted with Years & Years’ Olly Alexander on it, upping its gay ante.

This big, bold, brassy hit launched Kylie’s beloved Stuart Price produced Aphrodite album. It quickly become not only a signature Kylie tune but an LGBTQ+ community anthem. She also refused to cut the same sex kisses from the video – no wonder we can’t stop loving her!

Putting Kylie together with the Scissor Sisters was a true wave of the pink wand made in gay heaven. This swirling disco-esque hit helped her Ultimate Kylie compilation become a huge seller and, more importantly, made gay besties for life of Kylie and the Sisters’ Jake Shears.

Long before it was considered the “right” thing to do, Kylie appeared with Elton John in drag to cover this 1950s campy tune benefitting the UK’s Stonewall Equality Show. It was such a big moment in 1994 that a pic of our drag sister act that night made the cover of Gay Times.

Kylie: Song By Song is published by Fonthill Media. Visit fonthill.media for more or buy the book from all online retailers and good book stores.