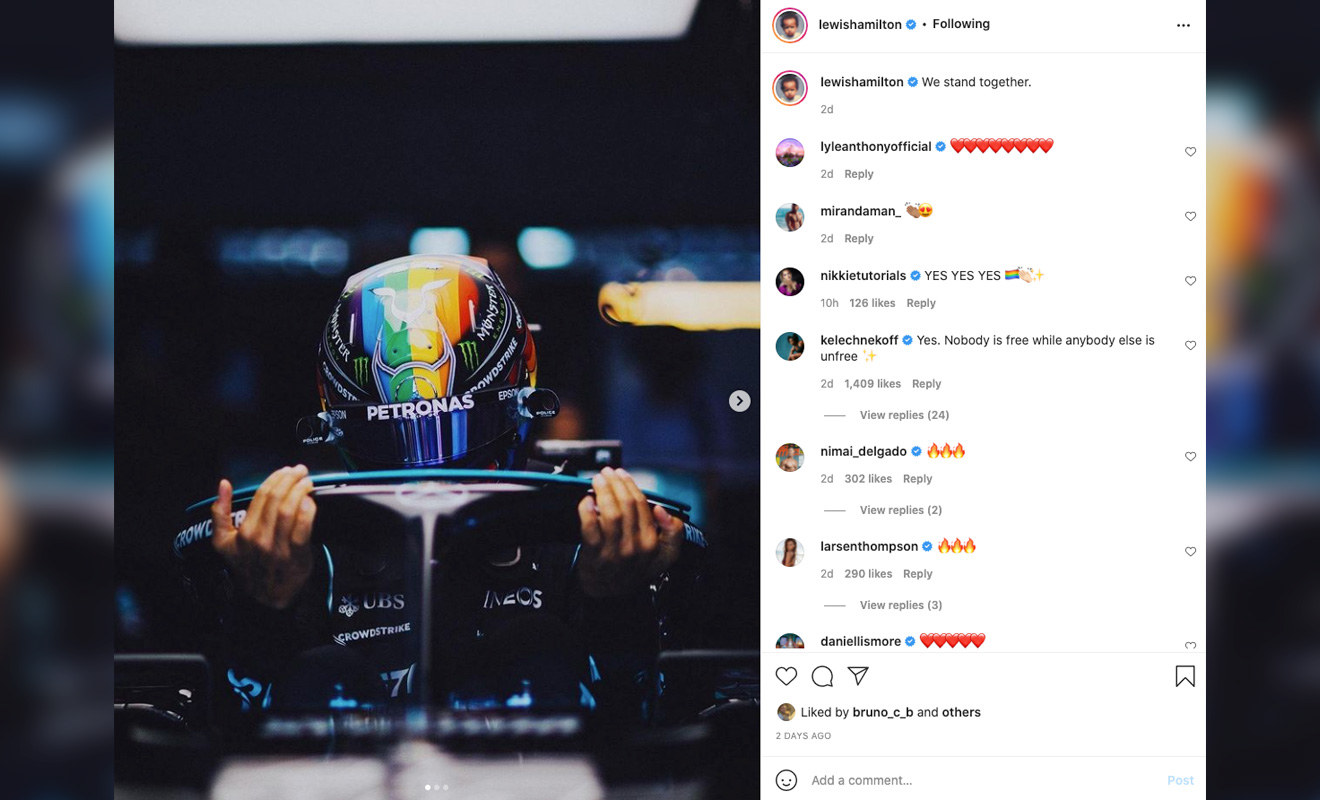 British racing driver and one of DNA’s Sexiest Men Alive for 2021, Lewis Hamilton, has been praised for, “an incredible act of ally ship,” after wearing a rainbow helmet during practice at Qatar’s Grand Prix, reports The Guardian. After his practice session, the Formula One driver and seven-time world champion posted to Twitter with photos of him wearing the helmet saying, “We stand together.”

Last week, Hamilton said that Qatar was, “one of the worst,” places in the world for human rights abuses and discrimination against women and the LGBTQIA+ community. He has also repeatedly spoken out on Formula One’s need to address these issues in the countries they visit, saying, “as sports go to these places, they are duty bound to raise awareness for these issues. These places need scrutiny. Equal rights is a serious issue.”

Racing driver and co-founder of Racing Pride, Richard Morris, has said that it was an, “incredible act of allyship from Lewis to show solidarity with the LGBTQ+ community, in the context of Formula One visiting a region in which LGBTQ+ people face discrimination and challenges to their human rights.”

Morris also said that Hamilton’s vocal support for the LGBTQIA+ community, “fills [him] with hope,” that the sport is becoming more inclusive and creating allies and LGBTQIA+ role models for young people.

In our Sexiest Men Alive issue for 2021, we discuss the journey Hamilton has been on from public apologiser, to ally, to outspoken advocate. In 2018, Hamilton was heavily criticised for commenting negatively about his nephew wearing a princess dress in an Instagram video. He later apologised saying, “I want to make amends. I accept it, realise it and I’m glad that I’m accountable for it.”

Since then, Hamilton has consistently shown support for LGBTQIA+ people. Most recently in July ahead of the Hungarian Grand Prix, Hamilton criticised the Hungarian government for introducing legislation limiting the teaching of homosexual and transgender issues.

Hamilton said, “I want to share my support for those affected by the government’s anti-LGBTQ+ law… it is unacceptable, cowardly and misguiding for those in power to suggest such a law. Everyone deserves to have the freedom to be themselves, no matter who they love or how they identify.” He also praised fellow driver Sebastian Vettel for wearing a Pride shirt during the Hungarian Grand Prix, saying, “Love to see Seb supporting the LGBTQ+ community. Love always wins.”

You can read more about what makes Lewis Hamilton one of our Sexiest Men Alive in here.