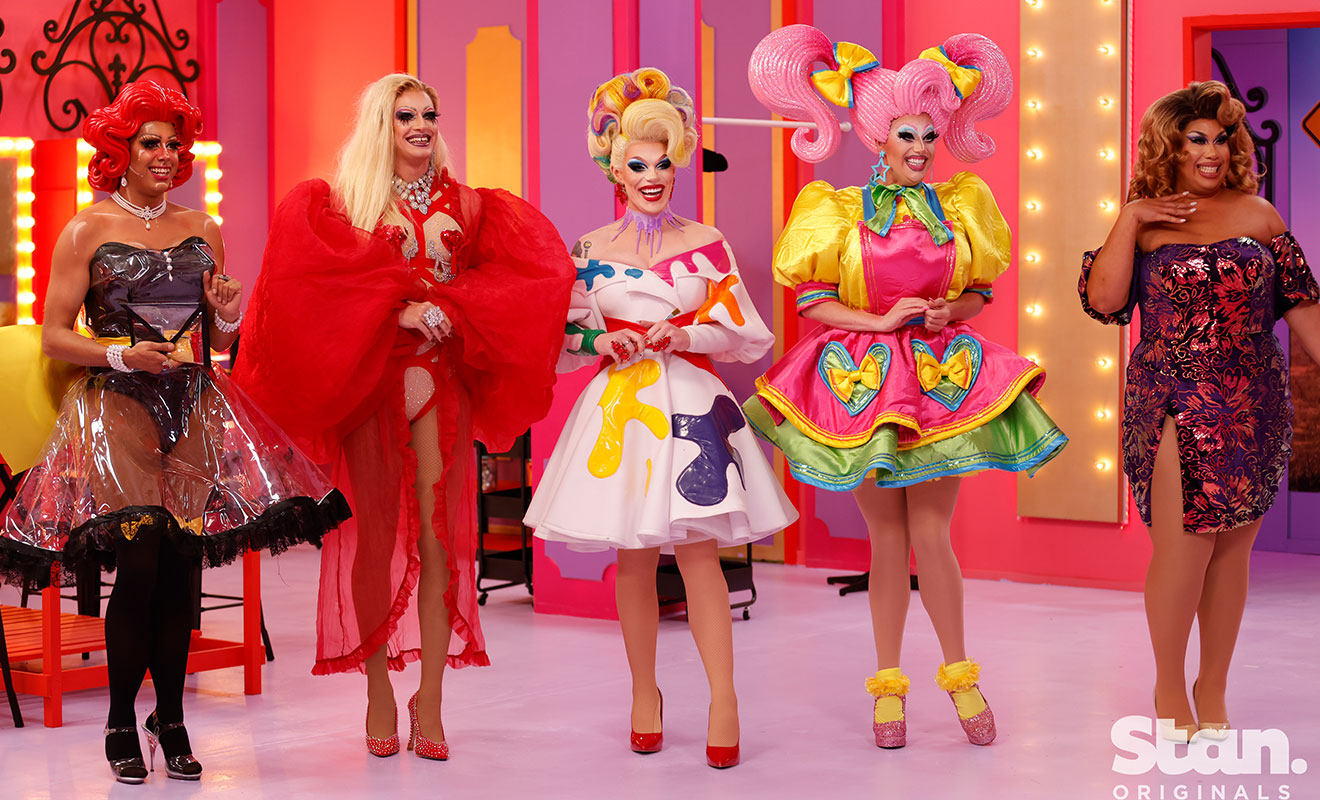 RuPaul's Drag Race Down Under (STAN.)

Welcome to Drag Race Down Under, where bad puns and double-entendres were trowelled on thicker than a queen’s foundation.

As each queen made her entrance, I thought of the international audience and hoped subtitles would be provided to help viewers with the Aussie and Kiwi accents. Imagine trying to keep up with ten Kandy Muses in conversation!

Then there was RuPaul’s “G’day, G’day, G’day”, which was even worse than his UK season attempt at “Allo guvnor”.

There were some great first looks and some big personalities. Karen From Finance walked in missed her mark, walking all the way to the camera. Hilarious, and immediately set her entrance apart from the rest. I predict Etcetera Etcetera’s cockroach lewk is going to become a “thing”. The self-proclaimed “Hollywood glamour bug on crack” was read by the other queens her for the “droopy antlers” and had them looking for the bug spray.

Electra Shock’s wig also came in for some shading, first by Art Simone who said, “I don’t know who’s more parched, me or her wig,” followed by Coco Jumbo suggesting the wig was “so thirsty it could have done with a glass of water”. Simone is already shaping up as the shady one, with throwaways like, “Do you want to say what you said earlier about…”

Simone also declared she’s “not here to fuck spiders” (a peculiar Australian saying meaning “let’s get on with the job”) and that she wants to “spread drag through the world like herpes”. Anita Wigl’it, described herself as “31 years old, looks 40,” while JoJo Zaho thought that compared to the other queens she looked like a lesbian truck driver.

The first mini-challenge had the queens in front of a green screen, flanked by two Pit Crew – one hot, well-built and handsome… and another one. The queens had to audition for New Zealand actor/director Taika Waititi by reading dialogue with a lisp, showing some emotions and holding a gun.

The only interesting parts to this challenge were JoJo growling in a deep baritone, Etcetera talking about someone finding her sweet spot and Maxi Shield faking an orgasm. We waited to see some amazing backgrounds dropped into the green screen and then Ru and Taika choosing a winner. But there was no payoff. What was the point of this challenge? Perhaps Ru was just contractually obliged to say “Taika Waititi” a number of times.

Back in the work room they started to defrock and more mud was flung:

“Her nose is a defining feature, what does she look like without the contouring?”

“Cute for Perth… other places… not so much.”

“The tradie for the season… it’s amazing what heavy cosmetics can do for a gal.”

But, once again, the work room was also a confessional space. These poignant moments may be that positive turning point for struggling LGBTIQA+ youth, learning that they are not alone and that their challenges are surmountable. For this reason alone, Drag Race is more than entertainment and has an important contribution to make.

This week, Kita Mean talked about her struggle with her weight. Jojo spoke of her Indigenous heritage. “I didn’t worry about people getting to the fact that I’m gay because the first thing they saw was the colour of my skin.”

The oddest moment of the episode came after Ru’s introduction to the main runway challenge: cut to the judges and there’s RuPaul sitting out of drag having a conversation with RuPaul in drag, filmed who knows where. Something about a “dingo ate her makeup” and it being lost in transit… Maybe she needs to travel with Homer Simpson’s makeup gun.

The Maxi Challenge required the queens to show two runway looks: Born Naked and No Place Like Home. From body suits with cushions attached to headless prawns, a swan being fisted and haute couture there were definitely hits and misses. Scarlet Adams’ latex suit tore when she put it on. Coco suggested she was going to be serving a c-section while Ru quipped that she looked like a human Fleshlight.

Simone gave us the first reveal of the season as she transformed her “Paris end of Collins Street” little black dress into a bright homage to Melbourne’s laneway street art. Once again, Karen From Finance shone, losing piece after piece until “naked” and revealing a sparkly bikini line complete with “glittoris”. Her second look, a drunken Melbourne Cup goer, resplendent with toilet paper stuck to her shoe had Michelle Visage critiquing, “Karen’s execution, executed all them bitches tonight,” and Ru declaring her this week’s winner.

Having to lip synch for their lives were Electra and JoJo, appropriately to The Bee Gees’ Tragedy. It was a fierce contest but after two desperate split-drops from Electra it was JoJo who was the first queen to sashay away.

We loved having Rhys Nicholson on the judge’s desk and one of his quips neatly summed up the first episode: “This is a strong opening, I hope you can top it!”

See you next week for more.