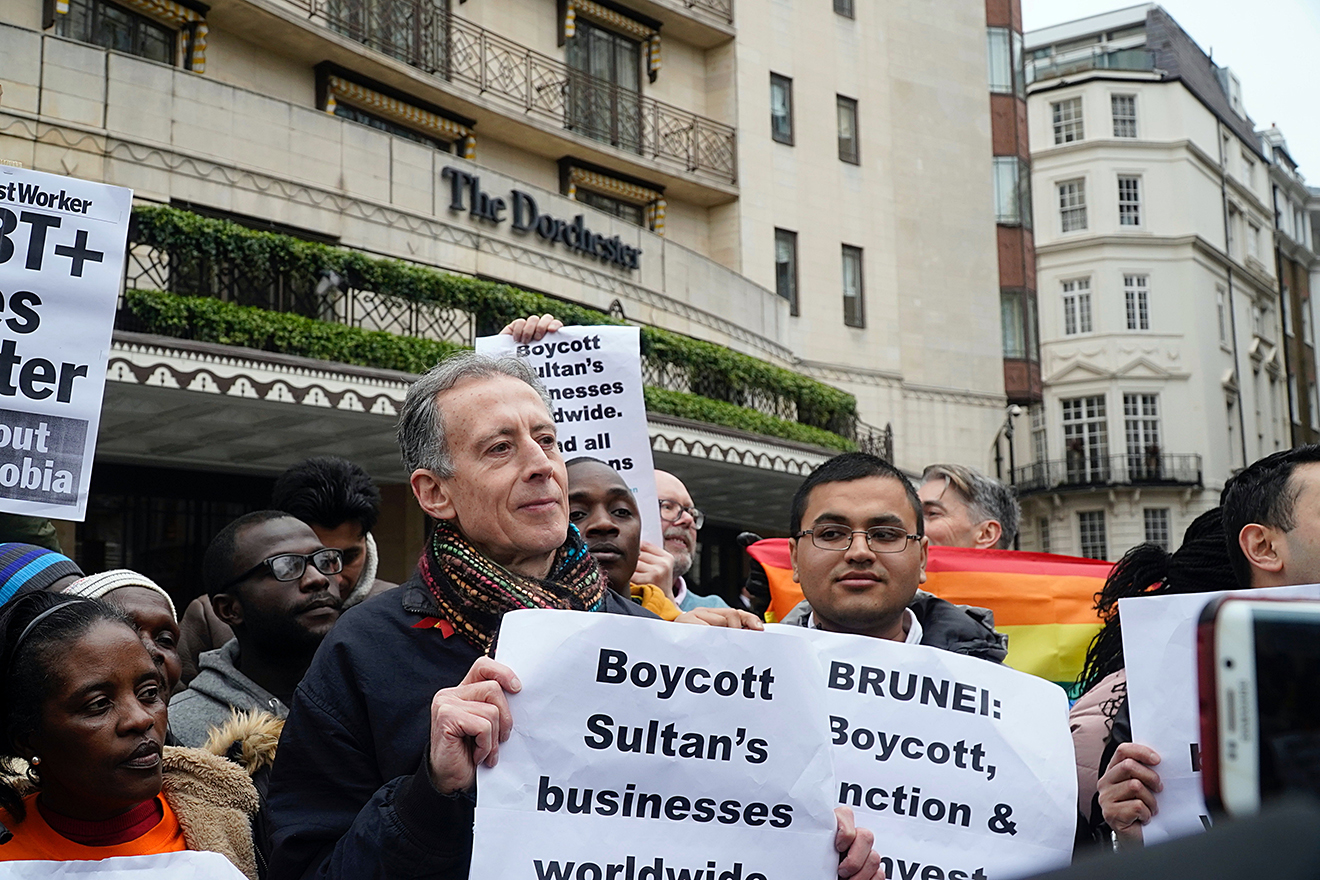 Peter Tatchell joins the protest outside The Dorchester Hotel. Shutterstock.

One of the world’s last absolute monarchies, the Sultanate Of Brunei, has implemented Sharia law, including the death penalty for adultery and homosexuality. But support for the law is not universal among the kingdom’s royals.

“I do not understand some people and their ideology. This is not human rights… I do not stand by it whatsoever. I am so sorry for those who are affected or feel looked down on.

The Sultanate of Brunei has just introduced one of the most inhumane examples of the legal persecution of LGBT people, implementing a final phase of its Sharia laws this week, which will see gay men potentially stoned to death if they are convicted of having sex.

Homosexuality was already illegal in Brunei with up to ten years in prison and LGBT people have no rights in the country. But in April of 2014, Sultan Hassanal Bolkiah announced the implementation of Islamic law in the kingdom, to be introduced in a number of phases over the following years.

“With faith and gratitude to Allah the almighty, I declare … the enforcement of Sharia law phase one, to be followed by the other phases,” the sultan said in a royal decree in 2014.

“[Some say] that Allah’s law is cruel and unfair but Allah himself has said that his law is indeed fair.”

The next phase introduced medieval corporal punishments like amputation of limbs and floggings for crimes like theft and robbery.

This new phase of Sharia, which contains the most serious punishments and introduces the death penalty for “sodomy” and heterosexual sex outside of marriage was originally due to be implemented in late 2015 but a wave of opposition from human rights groups and celebrities around the world stalled things then.

The Sultanate has now moved forward to implement that final stage of the law.

Brunei is 67 per cent Muslim, but there are significant Christian and Buddhist minorities and indigenous Dayak tribes who have their own beliefs. There have been conflicting reports as to if or to what degree the laws will apply to non-Muslims. But the Australian Department Of Foreign Affairs And Trade website is clear, saying, the laws will apply “to Muslims, non-Muslims and foreigners even when on Brunei registered aircraft and vessels”.

At 72, Sultan Hassanal Bolkiah is the oldest reigning monarch in the world after Queen Elisabeth II and has ruled Brunei since 1967 as its Prime Minister.

He is estimated to have a personal fortune of $20 billion, has been married four times (including to multiple women at the same time) and lives a life of luxury in an 1,800 room mansion with 17 floors and two million square feet of floor space, making it the largest personal residence in the world.

He also owns a hundred luxury vehicles and when he travels abroad it’s on his own private 747, which he pilots himself. He is reported to also own a Rolls-Royce limousine plated with 24 karat gold.

But the more colourful character in the royal family is the Sultan’s brother Jefri who has a reputation for being a womanising party boy. Jefri has three wives and has divorced two others and has been accused keeping a harem of 40 women in an earlier stage of his life.

He has also been accused of stealing $14.8 billion dollars from the Brunei government. He once owned a superyacht named Tits, which had two dinghies called Nipple 1 and Nipple 2 for ferrying people aboard.

The Sultan has used his power to make his brother’s legal problems go away. In 1997 Shannon Maretic, a former Miss USA, sued Jefri, claiming that he had hired her for what she thought was promotional work but instead says he was held as a “virtual prisoner” and drugged and sexually abused.

The case was thrown out when the judge ruled that the Sultan had sovereign immunity as the head of state.

Jefri has been welcomed back into the family despite his charges for embezzlement, though he has been made to transfer most of his personal fortune back to the government. At one point he owned 2,500 luxury cars – the largest personal car collection in the world at that time.

Will the new Sharia law be applied within the royal family who, unlike most local people, can afford to flout the law by simply jetting outside the country whenever they feel like it?

Support for the law within the royal family is not universal. Many of the younger princes and princesses have spent much of their lives outside the country where they have been exposed to openly gay people. In the lead up to the implementation, the Sultan’s nephew, Prince Aleem, referenced the new law’s effect on LGBT people in Brunei in a quickly deleted Instagram post.

“In light of the recent news surrounding Brunei, I feel as a Bruneian, I should address this,” Prince Aleem wrote, “I have had so many messages surrounding this topic and I believe addressing it will hopefully put some light on the situation. All views are my own.

“Despite not being part of the LGBQT+ community myself, I have met so many people who are part of it. I can easily say they are some of the best and nicest people I’ve ever met. If we go back to 2013, the same article was present. From what I’ve been told, it may not be true, but I’ve been lied to and disappointed before.

“This, if this news is to be true, I will be very disappointed. No one should be judged and punished for living their life the way they want to live it. Those in the community deserves better and not to be treated like animals. We are all human after all. Why judge someone because of their race, religion, and sexuality.”

“It’s 2019 and the world hasn’t changed much. I do not understand some people and their ideology. You talk about human rights, but this is not human rights? By judging someone like this proves hypocrisy. I do not stand by it whatsoever. I am so sorry for those who are affected or feel looked down on.”

The Sultan, one of the world’s richest men, has billions of dollars invested in the West, owning a group of luxury hotels across the US and Europe and celebrities including George Clooney, Elton John and Ellen DeGeneres have joined a campaign to boycott these until Brunei reverses its treatment of LGBT people.

Several petition campaigns to condemn the treatment of LGBT people in Brunei have also been launched, including one to ban Royal Brunei from flying to Australia and Virgin Australia has already axed a staff travel deal with the airline.