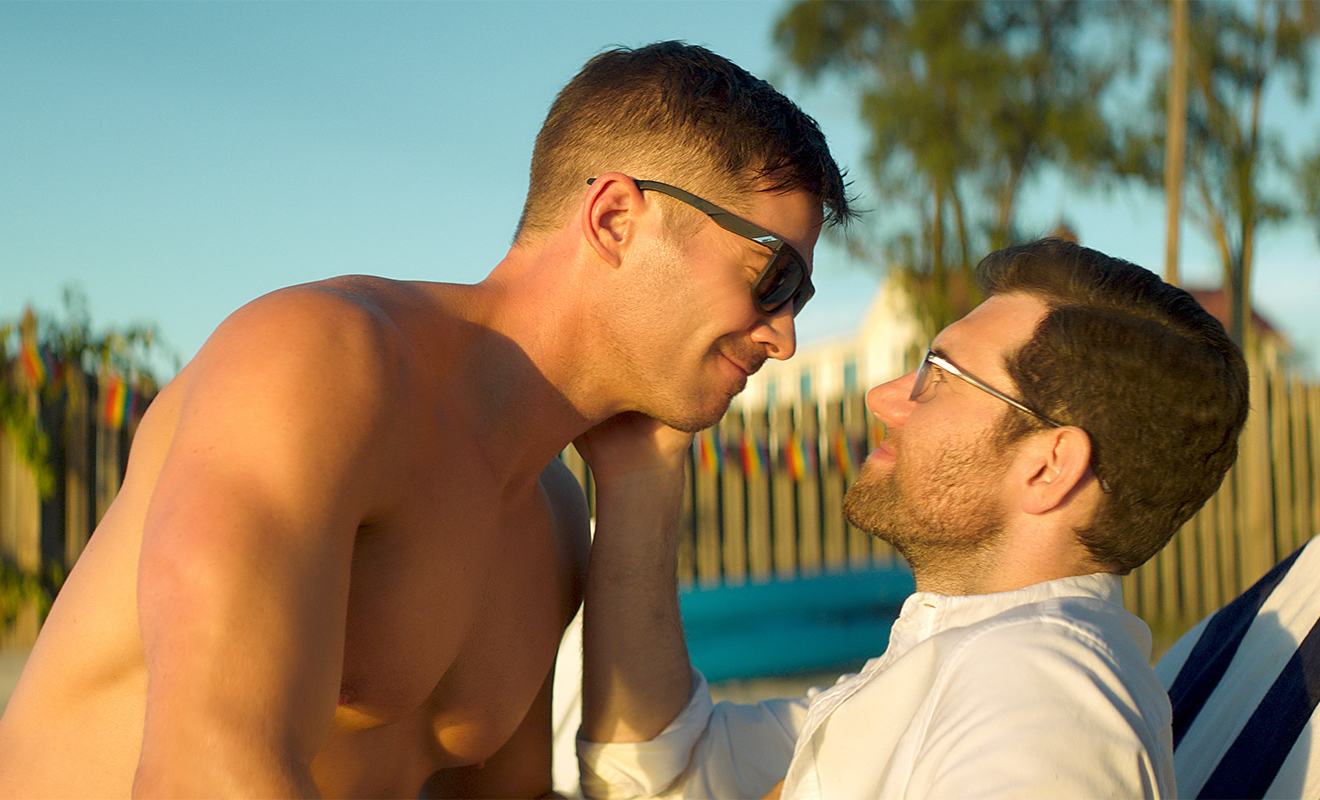 Out-there comedian Billy Eichner is putting the finishing touches to his groundbreaking new rom-com, Bros. It’s a gay rom-com, with all openly gay actors in all the roles. Even the straight ones. That’s quite a breakthrough for Hollywood!

Director Nick Stoller wanted Eichner, who’s defiantly very out, to star in it. Then he asked Eichner to help write the script because Stoller was straight and wanted to get it right. “I’m in!” said Eichner, and promptly began to open Stoller’s eyes. Eichner Zoomed with DNA from LA.

And that’s the point! Bros is the first big Hollywood movie with all openly gay actors – is this some sort of payback?

[Laughs] I don’t know if it’s payback, but we’re trying to restore balance and create a Hollywood culture that’s evolved and diverse and inclusive. Giving opportunities to actors overlooked in the past because of their personal identities.

Look, I’ve been openly gay my entire life, and from my earliest days in comedy in New York. And that was a very straight-male-dominated field. Only recently have LGBTQIA+ performers been taken seriously. I wanted this movie to be an opportunity, not just for me, but to bring other gay actors along with me.

What do gay actors bring to gay roles that straight actors can’t?

Being LGBTQIA+ is a specific life. We’ve had to navigate a heteronormative world as part of a marginalised community. We bring all that life experience as queer people to our art and a specific, nuanced understanding of what it means to be gay and how we navigate life and love and dating and sex. Comedically, we can make fun of each other in a way that doesn’t feel insulting or offensive because we’re all part of the same community. Straight people can’t do that.

You didn’t shy from anything here, including sex scenes. Tell us about those.

Sex is part of life [laughs]! It’s part of dating and love, part of figuring out a new relationship. Sex can be so many things dramatically, and it can be a great source of physical comedy. We’ve seen so much of that in stories about straight couples over the years. How many films have we seen about awkward one-night stands between a man and a woman?

But we’ve had so few stories about two men coming together. Sex is part of that. There’s comedy to be mined from that. It’s also very romantic and this is a romantic comedy. And there’s a curiosity about gay sex and it’s important to destigmatise it. Because at the end of the day, gay people have been around since the beginning. We’ve been having sex with each other since the beginning of civilisation. It’s time to have a couple of gay sex scenes [laughs]!

If, as a gay man, I’m watching two straight actors simulate gay sex on screen it’s very hard to accept the performance because I know the guy is only pretending.

Nick Stoller is straight and came to you saying he needed a gay man to co-write the script. Specifically, what gay stuff did you put into the script that Nick wouldn’t have had without you?

It was a great partnership. As you said, Nick came to me and said: “I wanna make another rom-com and I want this one to be about a gay couple, but I’m not gay. Will you write it with me? And you can star and I’ll direct.” I educated him a lot on gay culture and gay love and what it’s really like.

First, I pulled out Grindr, which we’ve all used for over a decade. He’d heard of it but he didn’t know what it looked like or how it worked. I showed him. Then I said we can’t make When Harry Met Sally and slip in two men and pretend it’s an authentic reflection of two men dating in 2022.

I said to him gay men, and the LGBTQIA+ community in general, have a very liberated view of sex and love, and marriage and monogamy. You do find gay couples leading heteronormative lives. And you find many who don’t, and many who make their own rules. We’re happy to have the right to marry, but we don’t necessarily prioritise marriage or even a long-term romantic relationship. Some do, some don’t. You find a lot of variety in the gay world. We don’t play by the straights’ rules. I educated him on that [laughs]!

And to his credit, though he didn’t always immediately understand it, he was always very open to it. He said to me, whatever is real, whatever is authentic, whatever is the truth – that’s what we put in.

Luke Macfarlane, who plays your boyfriend Aaron, was on Brothers And Sisters when there were so few gay characters on prime-time.

He’s so wonderful. Rom-coms don’t work unless both people are compelling and funny and likeable. He’s the yin to my yang. We’re very different, on camera and off, but we love each other. I didn’t know him beforehand but the second he walked in we all just looked at each other, like, this is the guy! Our chemistry was exactly right. He’s a very handsome classic leading man, and much more. He brings unexpected warmth and vulnerability.

I also really appreciate that Luke came out of the closet so early. He’s one of those people you wouldn’t instantly think of as gay, yet he came out when he was on Brothers And Sisters, a very different time in Hollywood for gay actors, especially for Luke, who should’ve starred in a million rom-coms by now and hasn’t because he was brave enough to come out. We just took a bet on each other and it worked.

A LIST OF STRAIGHT ACTORS WHO HAVE PLAYED GAY

Timothée Chalomet, Armie Hammer — Call Me By Your Name (2017)

And the winner is Colin Firth (four), followed closely by Hugh Grant (three)!