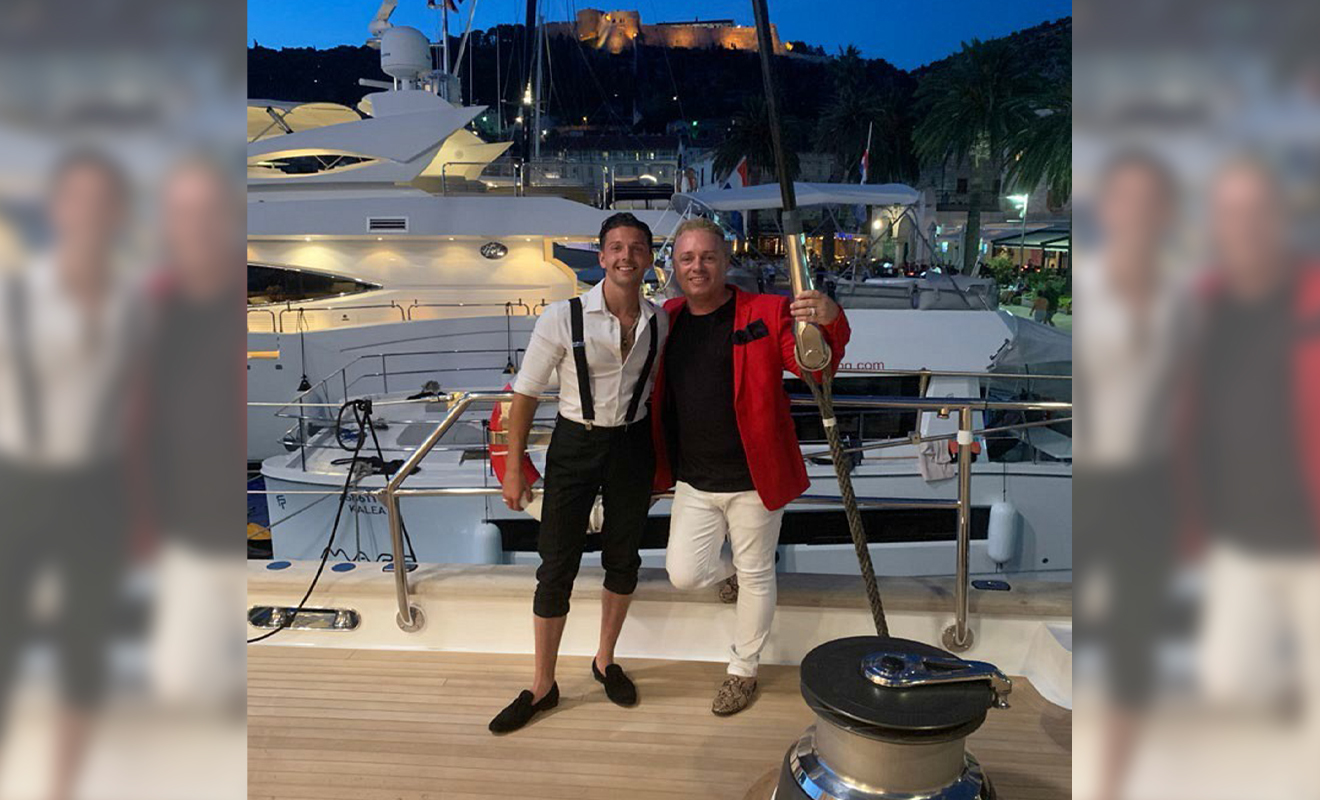 Scott (left) and Barrie (right) in port in Croatia. (Supplied)

When millionaire Barrie Drewitt- Barlow and former go-go dancer Scott Hutchison announced their engagement, tabloid headlines in the UK erupted. Not only is there a 25-yearage difference, Scott was Barrie’s daughter’s ex-boyfriend! Or so the papers claimed. Beyond the headlines and the judgemental comments that followed, however, is a very grounded couple, deeply in love, and now expecting their first child. Mike Hitch spoke to Barrie and Scott separately to discover the full story and how important family is to the couple.

DNA: Congratulations on your engagement. Do you and Scott have a date lined up for the big day?

What sort of celebration will you have if COVID-19 restrictions are still in place?

I’m going to hire a small island off the coast of Croatia and fly everyone in a week before, test before they arrive and once again after they arrive, let them all chill-out for a week in the bubble, then test again at the end of the week and then get married. It will be the best million quid I ever spent to have the whole family there!

What did your kids say when they found out you were going to propose to Scott?

They didn’t actually know until after… Didn’t want to be embarrassed if he said no!

Was there any reason you thought Scott might say no?

Yes. The press has been a little hounding, to say the least, since we broke the news that we are now an item. Some of the things in the comments sections [of news websites] have been terrible about him being a gold digger and the rest of it. It’s water off a duck’s back to me. I have never given a flying fuck what people think of me but he is sensitive and it gets to him. So, I guess I thought I might be more trouble than it was worth for him to say yes!

The way you proposed on the yacht looked very special…

[Laughs] I did have some professional help to decorate the yacht!

Were there any hiccups along the way?

How important is having your family support your relationship with Scott?

Family support means everything; family is special to both Scott and me.

So, what role does family play in your relationship and your happiness?

I wouldn’t be the person I am today without Tony and our kids. [Barrie and his previous partner Tony became gay dads of twins with the help of a surrogate mum.] They are, and have always been, my reason to get up in the morning and are the driving force for me to work hard and provide a great life for them. That will never change. My new relationship is very much a big part of the greater family life. I can’t imagine my life without them.

What do you say to those who are critical of your relationship and your family?

Over the past 20 years, Tony and I have had so much negativity. We knew that to get through the negative we had to be positive, and didn’t want it to effect our children. You can’t make any change by being a wallflower. When you are the first to do something its always going to be a big deal in the media. With that comes negative and positive comments.

Have you decided on a name for the newest edition to your family?

We have. However, we are not sharing. We’re in the process of making a reality show and it will be a part of that.

How will you protect the child from intrusive media attention?

We will do what we did last time with the twin boys, Jasper and Dallas; very limited and controlled media appearances.

When did you know you wanted to marry Scott?

Half-past-eight in the morning and at 11pm, I purposed. I mean, if you saw his butt that morning!

DNA: Were you expecting Barrie to ask you to marry him or were you blindsided?

Scott Hutchison: Totally blindsided. I completely broke down when he asked me. In fact, when he asked to speak to me I thought he was breaking up with me!

Why did you think that?!

We were in Croatia filming a reality show, which will be aired around January 2021. We had gone to bed on a high note the night before, but I knew there was something not right in the morning. Barrie had left me in bed and got up, something he never does – we always go to breakfast together. When I went up to the deck everyone stopped talking and Barrie and Tony went for a “walk”. It was kinda strange. He couldn’t look me in the eye all day and kept going off to talk to the crew and the captain.

What was the first thought that went through your mind when he popped the question?

I was more relieved than anything, because I was thinking it was a break-up! After the shock wore off I thought it was the most romantic setting and I could have wished for!

When did you know you wanted to marry Barrie?

I fell in love with Barrie and… I could only have dreamed that we would marry. Coming from the background I do, to the lifestyle I have now, is a fairy tale and he’s my Prince Charming. He has changed my life I am honoured he picked me to marry.

What sort of background do you come from?

A very humble background. My dad is a train driver in the UK and my mother is a stay-athome mum. We never had any money when I was growing up. We lived in a council-owned house with my brother and sister.

How are you feeling about the arrival of you your daughter?

It’s incredible. I’m so excited but also totally nervous. Luckily, we have a huge family network; so many people will be there for us. Knowing I am about to be a dad is completely amazing and I’m so privileged to co-parent with such an amazing man and provider.

What’s something you’re going to do better than your parents?

It’s going to be hard to better anything my parents did. We may not have had much or a fancy house like the one I live in now, but we always felt loved and looked after and safe. That is all any kid really wants. Everything else is just a bonus.

Has anyone close to you but outside of the Drewitt-Barlow family expressed any reservations, and what have you said to them?

Yes, when my relationship hit the press there was a lot of negativity. A few friends from high school messaged me asking me if I was doing the right thing being with someone that’s in the public eye, especially with him being in another relationship. But Barries ex-partner is one of our close friends and I’ve discuss it and he made me feel okay about everything. Everyone else, including my parents, are so happy for us. Especially my mum. She can’t wait for the baby to arrive.

How did you two first meet?

I was working as a go-go boy in a gay cocktail bar. I could tell by the big tip Barrie left me that things would progress.

So, what did you do for your first date?

We went out to a fancy restaurant in New York – on a roof-top terrace. Barrie had booked the entire terrace just for us. It was amazing. All the staff were staring at us! I felt like a prince! He got me drunk on Bolly and then we went back to the suite and I had my first out-of-body experience. I had never, in my life, had sex as good as I did that night. I mean, I’d heard the gossip in England about the string of lovers Barrie had had over the years. Most I just didn’t believe but, my God, I could see why he had people interested! He treated me like a prince then made love to me like I’d never experienced before. So many people write about me being after him for the money or using him when, in reality, I could actually say I’m using him for the sex!

Saffron [Barrie’s daughter] introduced you; when did the “spark” happen?

Actually, it was Barrie who introduced me to Saffron. I’ve always been bisexual and Saffron knew that when we met. There was never a sexual relationship between Saffron and me. People believe there was, but that just adds to the outrage about Barrie and I being together.

Is that fact something that other journalists have ever bothered to clarify?

Well, because the headline grabs better attention when it’s all about “gay dad asks daughter’s ex bf to marry him”. [Laughs]. I don’t care so much about that anyway, to be honest. I don’t think I’ve mentioned it before – that we never actually had sex.

Has it been disappointing to see people rush to criticise you and Barrie, despite not even knowing you?

Yes. To read these things about our relationship can really hurt, so now I don’t read the comments. Barrie has been going through this type of thing for years, but it’s all new for me. I guess we are always going to criticised so all we can do is ignore it.

What’s in store for the future, other than parenthood?

We are just going to spend lots of time together. We plan to have another baby next year so our daughter will have a sibling close to her age.

Good luck! What’s the one thing you and Barrie want for your daughter’s life?

That she is happy and able to live her dreams. Barrie always jokes that he just hopes he’s still around to see her grow up.