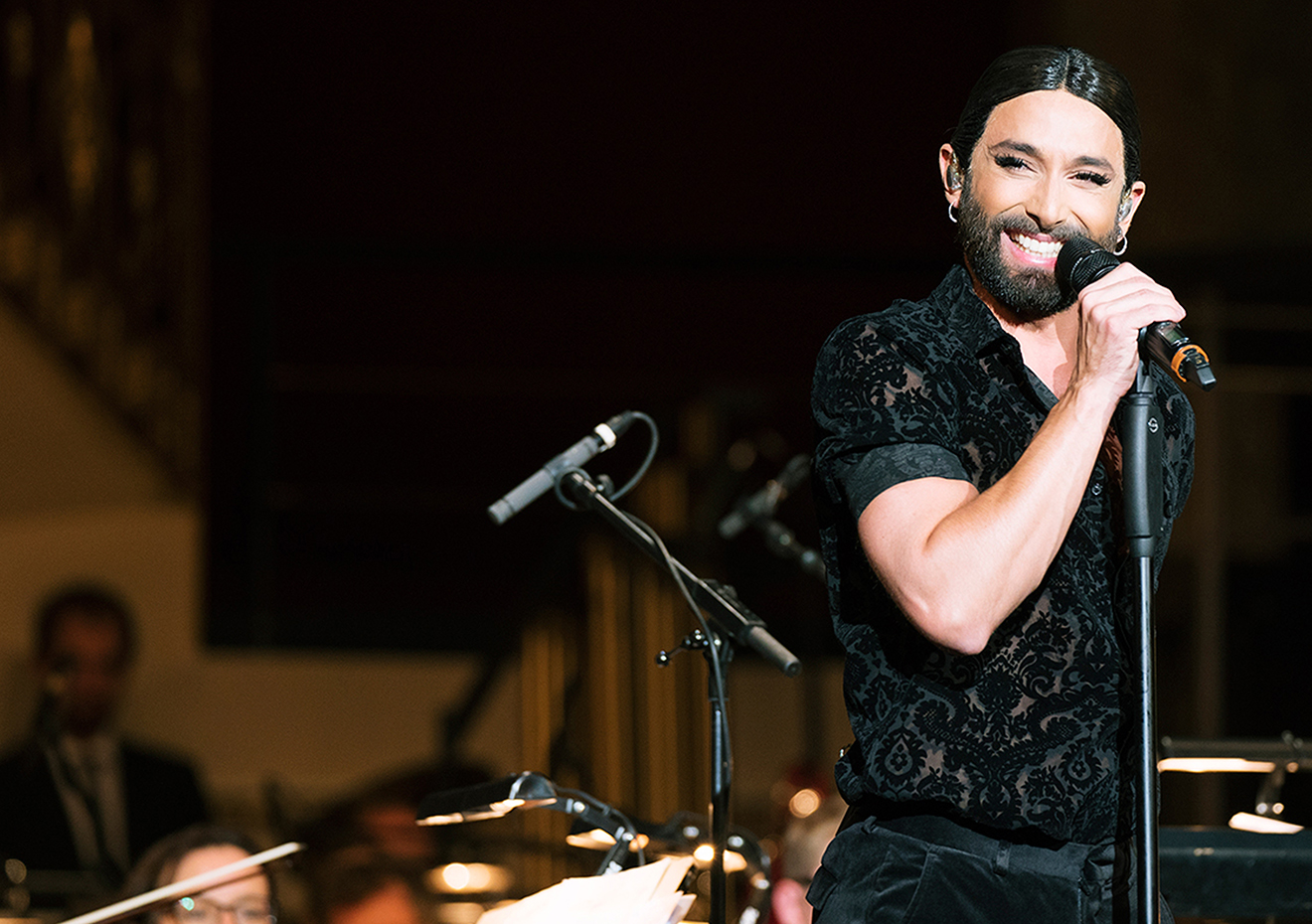 1. You radically changed Conchita’s appearance for Hit Me last year. Which appearance/s will she bring to your shows with Trevor Ashley?

I always try to take the occasion into consideration, so whenever I am on stage with an orchestra, like I will be during the shows with Trevor Ashely, I will be dressed adequately.

2. Why did you change Conchita’s appearance?

I changed my public appearance because everybody does from time to time. You change your hairstyle or your wardrobe. It’s natural, and I was bored with what Conchita looked like after 5 years, to be honest.

3. You created the bearded lady to push the conversation about breaking boundaries and being yourself, perhaps further than anyone’s ever done. Do you ever find that the Conchita character is limiting artistically?

Of course, I realised that the way I created Conchita as a perfectly nice president’s wife was limiting, not only in the way she expressed herself, but also in the songs she would perform. Don’t get me wrong, I love being dramatic but, in a way, playing Conchita on stage started to bore me. So I thought to myself, why don’t I create the music that I would personally listen to at home, and this is how I came up with the electronic music on my third album Truth Over Magnitude, which I released last October.

4. What things have you been able to get away with as Conchita that you wouldn’t as Tom Neuwirth?

Conchita is a lady; she can get away with everything! [Laugh.]

5. What can you do as Tom that you can’t as Conchita?

I can be such a lazy boy, you cannot even imagine. Hanging out on my sofa in jogging pants is something that I can totally do as Tom, while Conchita is the working queen who hates waiting or having nothing to do.

6. In 2014 we needed Conchita. In the six years since, the world has become even crazier; what wisdom can she bring to us now?

I don’t think the world needs wisdom from Conchita, to be honest. I believe if everyone just invested time in their own personal development and accepted others simply the way they are, we’d all be able to lead much happier and more fulfilled lives.

7. You famously said: “You only can hurt me if I don’t know who I am.” Can you explain the truth of that to someone struggling to find their identity?

I believe that many people pay too much attention to what others have to say about them, very often people they don’t even know, especially on the internet. I believe it’s more important to connect in real life than on social media and the internet if you want to evolve as a person. Honestly, I couldn’t care less about what’s said about me on the internet by people who haven’t even met me. And I wished more people, especially younger ones, would feel the same.

8. LGBTIQ kids, especially, are anxious about how their family will react to learn they have a child not fitting “the norm”. How did your own family react to Conchita?

Oh, my family is a blessing, they reacted very well and were very supportive when I came out as a gay boy, and they supported my artistic persona as Conchita Wurst all the same.

9. What will you get up to on stage with Trevor? What will be the highlight of the show for audiences? And for you?

Just being allowed to come back to Australia to perform with Trevor Ashley is a highlight for me, personally. And then it’s always a highlight to perform with an orchestra, as opposed to my band – it adds such an official feel immediately. I cannot wait to be there for three evenings of great music and entertainment. And fun, I guess.

10. The last time DNA caught up with you was when our Editor, Andrew, was in Vienna for Pride and you taught him to make apple strudel! What’s been cooking in Conchita’s kitchen recently?

Ha, ha! I remember cooking together and we had some drinks, too, right? What’s been cooking in my kitchen? Well, my latest album, I was touring with my band and interrupted that European tour so I could come join you in Australia. In April, I’ll be hosting the Amadeus Austrian Music Awards, and then I’m moving to Amsterdam for two months for an artistic residency – let’s see what flavours that will bring into my artistic output.

Conchita Wurst  will be heading to Australia for the first time in years to perform a series of concerts in Brisbane, Melbourne and Sydney with a Symphony Orchestra, Trevor Ashley and Kate Miller-Heidke.

Book your tickets at https://www.conchitaandtrevor.com/