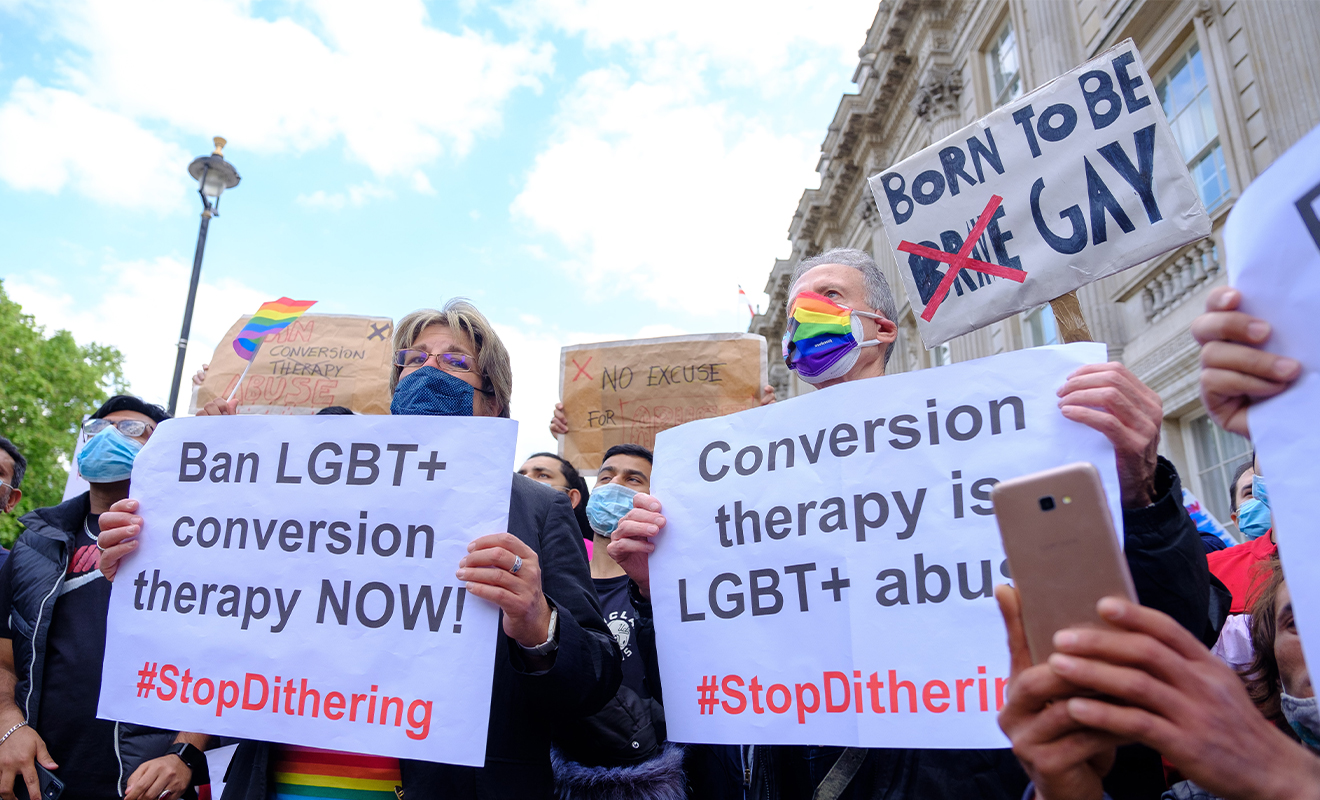 Many countries around the world have been waking up to the inhumane practice of so-called “conversion therapy” sometimes referred to as “pray the gay away”.

‘KEEP TRANS IN THE BANS’

Hundreds of protestors are demonstrating displeasure with Boris Johnson’s administration and their alleged unwillingness to include transgender people in those protected from conversion practices. According to The Guardian, protestors gathered at Downing Street and chanted sayings such as “Keep trans in the bans” and “LGB with the T”.

The UK government have expressed a desire to find non-legislative measures to end conversion practices. This garnered similar backlash as LGBTQIA+ advocates and mental health institutions stand firm that these detrimental practices require legal actions and protections for all queer people.

According to BBC News, 5% of the 108,000 people who responded to a 2018 government survey said they had been offered some form of conversion therapy, while 2% had undergone it. Those from ethnic minority backgrounds were twice as susceptible and 10% of Christian respondents and 20% of Muslims said they had undergone or been offered conversion therapy.

Boris Johnson’s special envoy on LGBTQIA+ rights, Nick Herbert, believes that the queer community has a right to feel betrayed but the outcry is hurting their efforts.

“LGBT groups were understandably dismayed, as was I, when a promised conversion therapy ban was suddenly dropped and then only partially reinstated just hours later,” says Herbert. “We must address the concerns and make the case for change, deploying the evidence and reassuring parliamentarians that a ban which includes trans people is a safe and justifiable course to take.”

THE CONSEQUENCES THAT TRANS EXCLUSION HAS CAUSED

In response to the governments exclusion of trans people in the conversion ban, one hundred LGBTQIA+ organisations withdrew from the international Safe To Be Me conference – the UK’s inaugural LGBTQIA+ rights conference. The withdrawal of many prominent institutions caused the event to be cancelled, reports The Guardian.

Stonewall are among those who protested the conversion ban’s exclusion of transgender people. The official website has a statement that reads, “LGBTQ+ people have nothing to be ashamed of and there is nothing wrong or broken about who we are… Make sure the ban protects everyone”.

Even prominent religious figures such as Archbishop of Canterbury Rowan Williams have made it clear that transgender people should be included in the government’s bans. The Archbishop wrote, “We see no justification for the ban on so-called ‘conversion therapy’ excluding trans people”.

Human rights activist Peter Tatchell was in attendance at the Downing Street protests and says, “We were promised a total ban. Boris Johnson has given us a half-baked ban, which we will never ever accept… The only ban worth having is a ban for everyone, including trans people”.

Despite the lack of support the trans community feels from the government, it is a heartening scene at Downing Street where the LGBTQIA+ community gathers to show strength in solidarity. The question now remains, will the administration take notice of this outcry and include trans people in the conversion therapy bans?

Related Items:conversion therapy, Keep Trans In The Bans, LGB WITH T, LGBTQIA+, Safe To Be Me, Transgender, UK politics