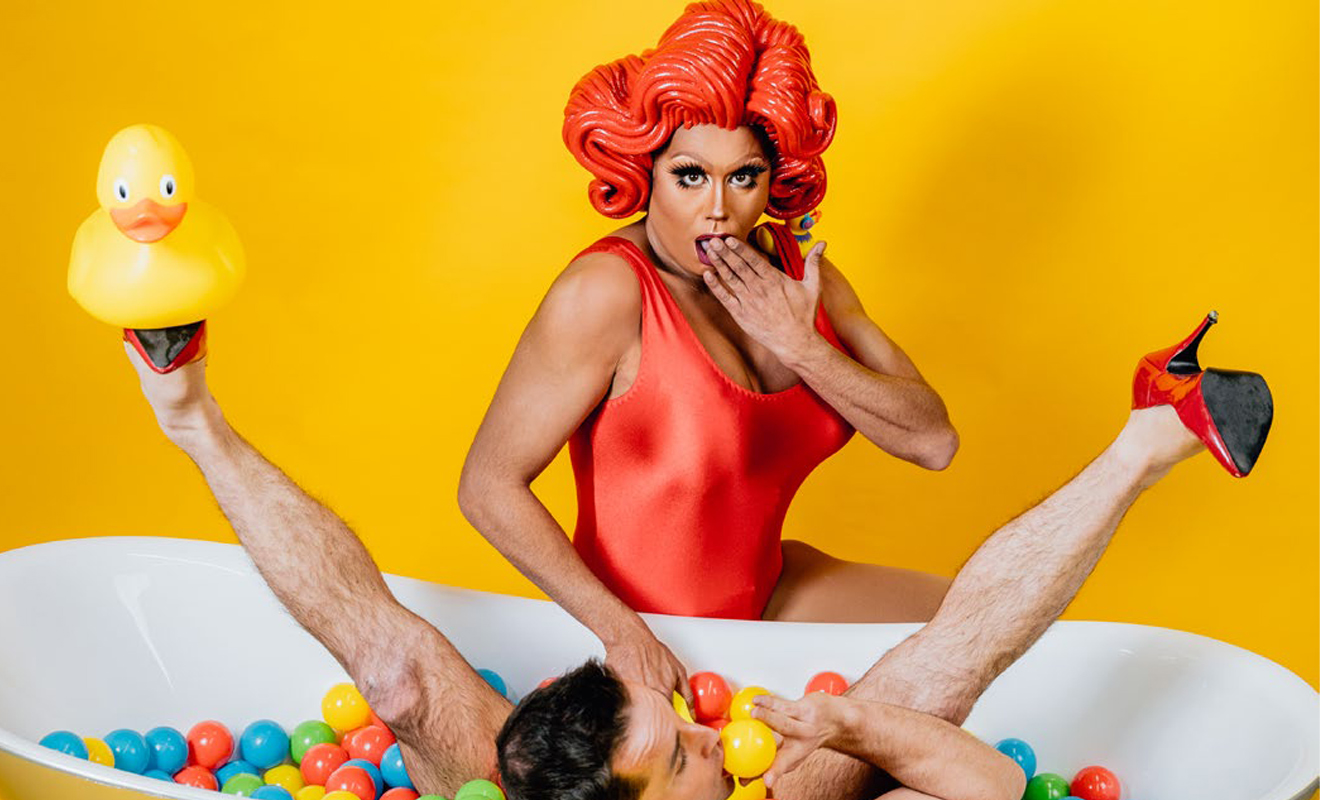 She lasted just one episode of RuPaul’s Drag Race but she made a lasting impression! Jojo Zaho (aka John Ridgeway) spoke to Mark McFarlane about finding her faboriginality.

“Bite the pillows ladies, mama’s a ho and she’s going in dry.” So announced JoJo Zaho as she entered the Drag Race Down Under Werk Room, introducing herself to the other Drag Race queens and the world!

“I didn’t worry about people getting to the fact that I’m gay because the first thing they saw was the colour of my skin,” she revealed in the first episode, an opening salvo that promised to open up some interesting conversations.

Unfortunately, Jojo was eliminated in the first episode – which made DNA curious to find out more about this deadly fierce performer.

Jojo was born John Ridgeway. On his father’s side, his Indigenous heritage is Biripi–Worimi, from the Australian east coast, while his mother’s heritage is English and German.

“Growing up, I didn’t like my skin,” John tells DNA. “I hated that I couldn’t hide it because there was a sense of shame, and it was something that I was picked on for. But I fought through that, got through that, and made it out the other end stronger than I went in. Then, all of a sudden in my teens, I was hit with my sexuality, and I realised I was going to have to do this all over again… with both the colour of my skin and my sexuality, my life and my future was going to be extremely difficult.”

Or so John/Jojo thought at the time. Today, he says he’s moved beyond that and is less bothered by people who “try and come for me based on my sexuality or my skin colour”.

As an advocate for Indigenous representation and visibility, he’s concerned about the high rates of youth suicide within the Indigenous LGBTIQA+ community and believes it’s important to send a positive message – and drag is an opportunity to do that.

Six years ago, while participating in a marriage equality debate in regional New South Wales, John was told by a local council member that, “homosexuality didn’t exist in Indigenous culture”. From his own lived experience, John knew this was not true.

Indeed, First Nations cultures around the world have always known about and even celebrated diversity. He cites the North American concept of Two Spirit People as an example, which recognises that people can have masculine or feminine spirits, or even both, and that they don’t have to align with their birth gender.

“In Australia, we have Brotherboys and Sistergirls and, quite often a queer Indigenous person, on a cultural level, was seen as having a unique perspective on both worlds,” he adds.

However, historically, this concept differed significantly to what was taught to Aboriginal people in white-run missions. Jojo explained to the other queens on Drag Race what missions were: “Camps run by churches and missionaries, where their religious ideologies were imprinted on those in the mission – that a man had to be a man and a woman had to be a woman.”

While the missions are gone, those teachings have been passed down and have permeated into parts of modern Indigenous society.

“Young boys feel they need to prove their masculinity and throw themselves into sport to do so. But if you’re queer as well, then some boys can find themselves pushed into this mould that they don’t really fit into, and that can take you down quite a dark path,” he says. “Then you have ignorant comments from people in positions of power that just perpetuate the problems.”

But it’s thanks to that ill-informed regional council member that Jojo made her first appearance. Following the meeting, John thought, “What’s something can I do to really piss him off?”

Thinking back to his childhood, he remembered how much fun it was to play dressups. “So, for that Dubbo Pride March, I decided, well bugger it, I’m going to dress in drag, in the Indigenous flag and the gay Pride flag to give him a nice little f*** you.”

Walking in drag, John was struck by the positive reaction it received from the community. “All the Indigenous kids on the side of the road during the parade were pointing at my costume because they saw the Indigenous flag. And that struck a chord with me – this isn’t something that’s very commonly seen. Not just a drag queen wearing an Indigenous flag, but queer Indigenous representation. The support was overwhelming.” Drag made a statement and so Jojo Zaho was born. Over the years, John has used Jojo to draw attention to the issues that are important to him – queer youth suicide and climate change to name just two.

“Most of my costumes have a message,” says John, and that’s a way for Jojo to start a conversation. “Sometimes it’s a fun message, but 50 per cent of the time there’s a strong political message, too.”

Drag Race viewers will recall the dress Jojo wore on the runway, which proclaimed, “Always was, always will be.” To Australians, this phrase is familiar as a reference to Indigenous people’s traditional ownership of the land, but Jojo took that message to an international audience.

“To spark a conversation, that was all I could really hope for,” says John, and he’s received messages of support and congratulations from First Nations peoples from across the globe since. “Not many people knew about Australia’s colonisation history to the extent that they do now because it sparked them to do their own research and to find out more. I hope that those who didn’t understand the meaning behind the message were led down a beautiful, educational rabbit hole.”

Prior to appearing on Drag Race, John was worried whether or not the show would allow Jojo to make such overtly political statements. Then he saw Symone from the US season 13 with her, “Say Their Names” reveal and took it as a positive sign.

“After seeing that, it locked in what I was going to do. We have to understand the platform that we’re given, and how important it is to not just make it about ourselves,” he says.

Positive representations of Indigenous LGBTIQA+ people are still relatively rare and, sadly, it’s often the culturally insensitive appropriations that make it into our news feeds. Instances of people performing “black face” still bubble up on social media. John/Jojo is generously forgiving on this hot-button topic.

“Nobody’s perfect, and I understand that we all make plenty of mistakes,” he says. “We’re only human, we make mistakes but we must also learn from them.”

But at what point is the excuse, “I didn’t know any better,” invalid, and when should a person be held accountable for their actions?

“While someone may say they’re sorry, the only ones who can accept that apology are the community who have been offended in the first place,” he says. “The important thing to remember is that whatever the culturally insensitive thing is that person did, they reach out to the community to show that they want to learn from their mistakes and if they don’t, then basically they’re a shit human being. Actions speak louder than words.

Sorry means to never do it again.”The runway outfit that revealed the “Always was, always will be” message.

YOU CAN BE FABULOUS AND INDIGENOUS. YOU DON’T HAVE TO PICK ONE OR THE OTHER. LET YOUR FABORIGINALITY SHINE THROUGH.

John is optimistic about the future, based on how much has changed in his lifetime. Growing up, he says, he never thought he was going to have a “normal” life. For the LGBTIQA+ community, marriage equality has been achieved and for him, that’s important.

“We’re no longer seen as ‘less than’ by the public. I have an amazing life. I have a beautiful partner who, one day, I hope to marry. We’ve agreed that he has to pop the question because I wear the dresses!”

Jojo has also moved on from the early days of “awful costumes in small venues with small crowds”. Jojo’s been Runner-up and Miss Photogenic in the inaugural Miss First Nations Pageant, she has graced the stage at Broken Hill’s Broken Heel Festival and is a mentee with Broken Heel’s mentorship program for First Nations performers. She made her first television cameo on Get Krackin’, featured in the Australian documentary Black Divaz, and hosted the VIP party for the Newcastle leg of Cher’s Australian tour.

With Jojo’s growing popularity and fan base, both she and John have had the opportunity to meet a good handful of celebrities. “I’m always starstruck,” John admits.

“That just blows my mind. I don’t see myself as any sort of celebrity. I’m just a man in a dress having fun. It wasn’t the future I had picked for me as a teenager – it’s better!

“You can be fabulous and Indigenous. You don’t have to pick one or the other. You can have both, celebrate both and live your life with both. Let your Faboriginality shine through.”

Is there anything else Jojo would like to add?

“Thank you for asking the real, in-depth questions. I got to answer some questions I wanted to, and we’ve covered some important things.”

Are there any unimportant things he’d like to bring up?