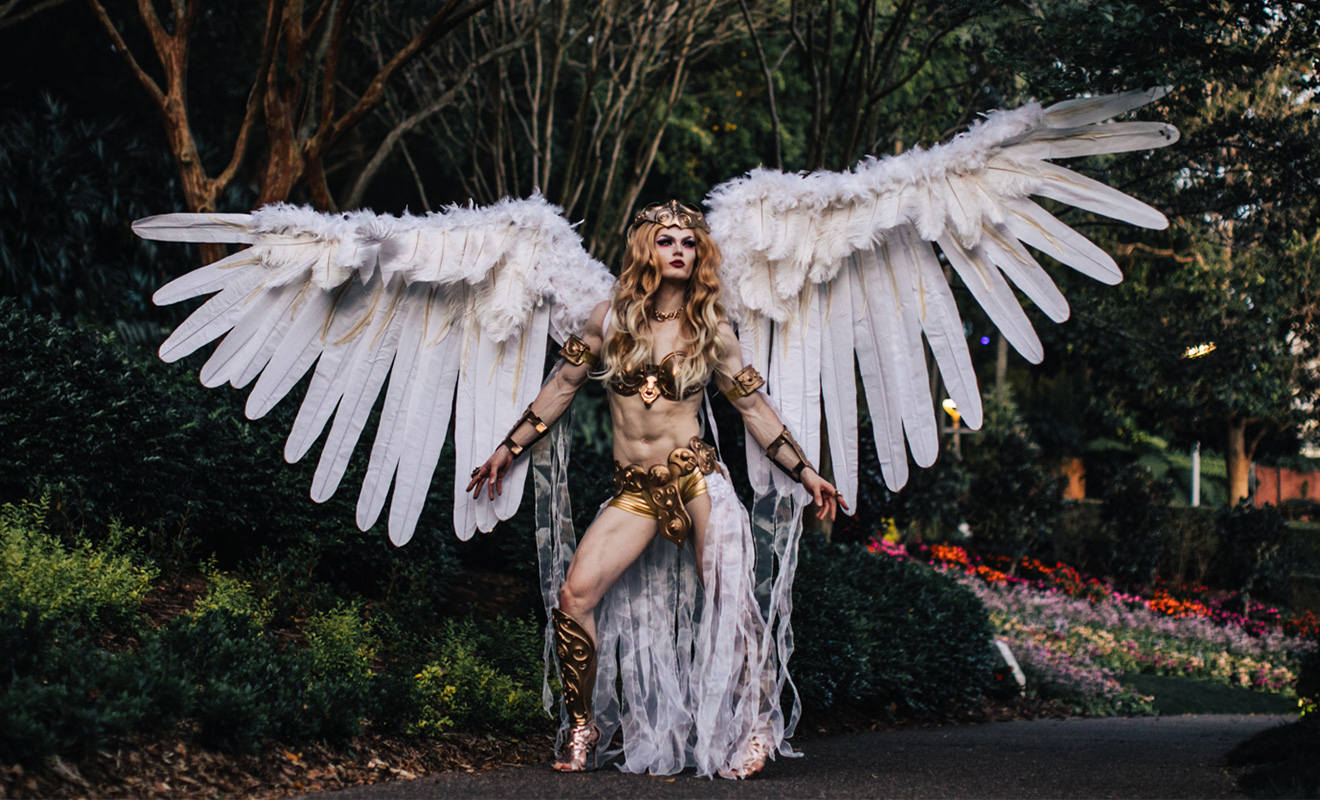 Jake Donovan-Parker is set to become one of the world’s first official bodybuilding drag queens! In drag, Donovan-Parker goes by Tara Zann and he is set to compete in the INBA Australian Titles Pro/Am on October 30, 2021.

Donovan-Parker will compete in the following categories; Sports Model, Physique, and INBA Angels. Bodybuilding competitions are known for competitors sporting three things: fake tans, speedos and bulging muscles. What’s less expected, yet somehow so fitting, is a full face of drag makeup and a wig.

Tara Zann will be donning two distinct looks, the first being the classic speedo and board-shorts for the masculine competition but then a handmade angel costume accompanied by a complete drag getup.

Donovan-Parker says, “I spent nine months making this outfit, hand making an impressive set of mechanically articulated wings and, with the help of my grandma, a set of angelic metallic armour with organza ribbons. My family all fully support me, and my grandma often helps me make my costumes, making them very important to me. People are always shocked when I tell them that my grandma sewed my costume!”

Although he won’t be able to win the INBA Angels segment because Donovan-Parker identifies as male, the category is less about bodybuilding and more about presentation. If the competition were about size it would be considered an unfair advantage for him to compete.

“Fear of backlash from other competitors and coaches has meant that I am only allowed to compete in the category symbolically. Lucky for the girls competing because I was coming to snatch trophies,” says the drag queen bodybuilder extraordinaire.

Donovan-Parker says, “Now some people may think I am competing in drag as a joke, but the truth is quite the opposite. I am a serious competitor and have wanted to do a bodybuilding comp for about 4 years.

“There are so many spaces and things that feel like they are off-limits for LGBTQIA+ people to enter or engage in, a lot of these spaces are traditionally cis-heterosexual dominated environments. Some of the most common places this happens is in sport; gays are stigmatised as people who are bad at sports and don’t like sports but that’s just not true for all and I think this idea is manufactured by queer people as a protection method,” says Donovan-Parker.

Shifting attitudes in the sporting world for LGBTQIA+ people involves courage. It also requires the ability to not be intimidated by an institution originally designed to exclude queer people.

“If we say we don’t like sports and convince ourselves it’s not for us, we aren’t hurt by being excluded from it… I think lots of queer people would be involved in sports if they didn’t feel threatened in these environments,” says Donovan-Parker.

This young man is reshaping the definition of an athlete. The narrow margins that constitute who is considered athletic or masculine versus who is considered feminine is shattered when individuals such as Jake take a stand. He says, “I am competing in drag to promote queer visibility and to show everyone that queer people are allowed to have passions outside of the status quo and that they should be taken seriously and accepted when they do”.

If you want to meet fitness-minded people, head over to Fitafy! Find your perfect fit.