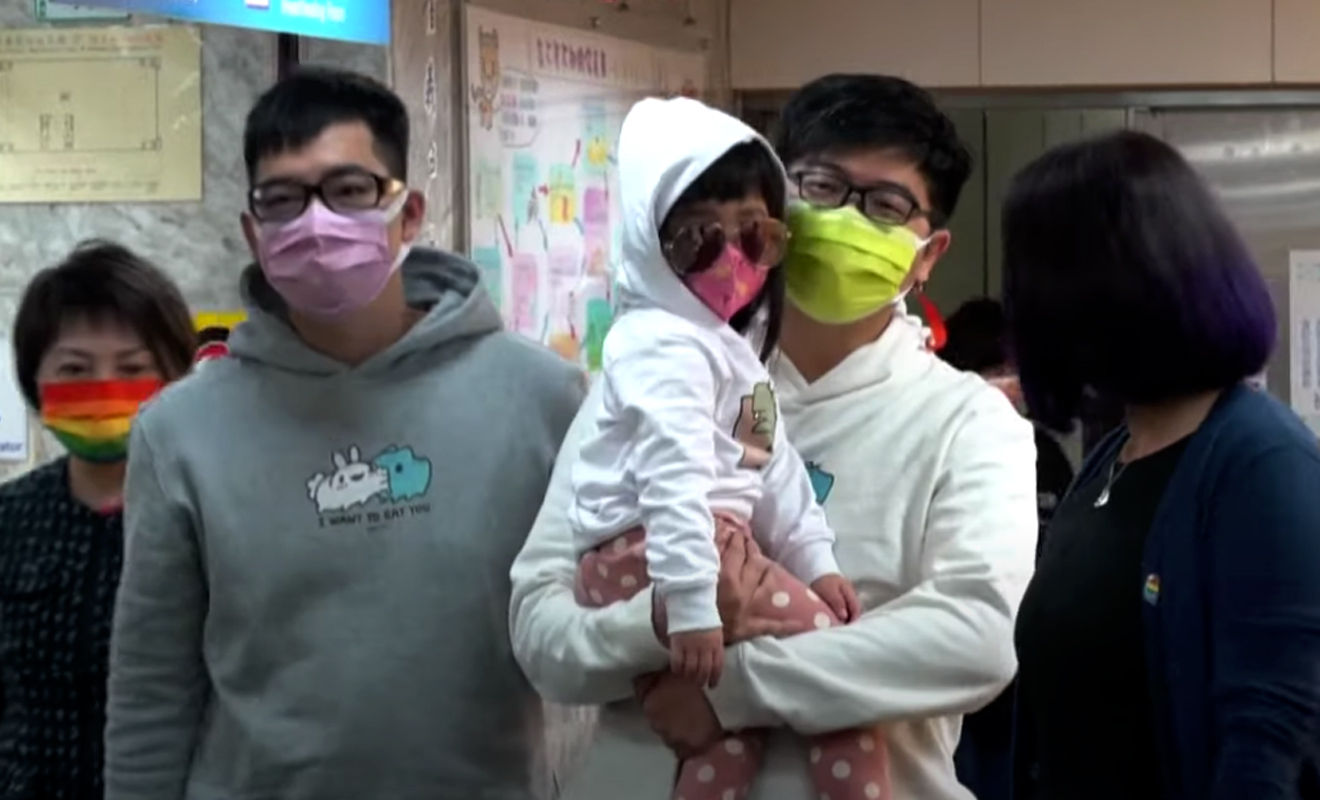 Married same-sex couple, Wang Chen-wei and Chen Chun-ju, have become the first couple in Taiwan to legally adopt a child neither of them are related to, reports The Guardian. The couple signed the adoption papers surrounded by press at the Taipei household registration office, while holding their daughter, nicknamed Joujou.

Taiwan legalised same-sex marriage in 2019, becoming the first jurisdiction in Asia to pass these laws, however, not all inequalities for LGBTQIA+ people were removed. The new laws allowed a person to adopt a spouse’s biological child but did not provide any direction on a couple adopting a child that was not biologically related to them. The lack of clarity within the law meant that in Taiwan a single person can adopt a child, and heterosexual couples can apply to adopt together. But if a married same-sex couple wish to adopt, they must divorce, one member of the couple can then adopt a child and the couple can re-marry, but the partner will not be allowed to adopt the child and will leave them without parental rights.

Leaving the registration office clutching their daughter, Wang said, “I have everything now. I am married and just like heterosexual couples, we can have our own children… we were born to have and enjoy all of this, we are not a charity case. We shouldn’t have had to fight for it.”

Wang and Chen have been together for more than 16 years and delayed their marriage in order to complete Wang’s adoption of JouJou, and bring the case to court to have Chen recognised as a parent. In December last year, the Kaohsiung juvenile and family court ruled that a child should not be discriminated against because of their parents status and that the law did not expressly prohibit the adoption of children by a same-sex partner. The ruling allowed Chen to adopt Joujou and be registered as a parent alongside Wang.

In response to the milestone court ruling, director of the Taiwan LGBT Family Rights Advocacy, Chu Chiajong, said, “At the end of the day, someone finally acknowledged it’s all about a child’s best interests, not just about the rights of an LGBTI couple… now their daughter’s ID shows both parents name on it. It means she finally is legally under the protection of both parents, of both dads.”

Although the court ruling is a big step for LGBTQIA+ couples in Taiwan, it does not set a legal precedent and the laws still need to be changed. Chu said, “We just need to fix one word in the same-sex marriage law, just the word ‘genetic’. If we get rid of that word it would allow LGBTQI couples to adopt.”

Wang and Chen have said they always wanted two children, but they will be unable to complete their family until the law changes, as they’re now a married couple.