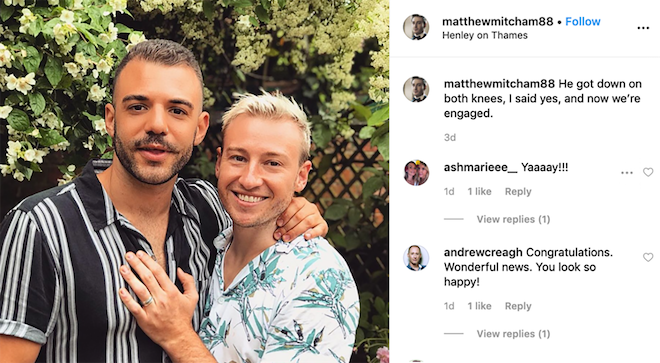 Making his announcement via Instagram Mitcham said his partner “got down on both knees and he said yes,”

He got down on both knees, I said yes, and now we’re engaged.

Mitcham joins a group of gay celebrities who’ve announced their engagement via Instagram.

The couple celebrated their six month anniversary in May. Mitcham said at the time

“The longest six months of my life, but mostly because of how much we’ve crammed into them. @lukeyluke8, thanks for being the Ricky Ricardo to my Lucy. ”

I wish I could say I’m humbled by the response we’ve received but the attention seeker in me is LIVING. Thank you for all the kind messages. I wish I could respond to each one individually but I’ve got my big fat gay wedding to plan. I’ll heart each message to let you know I’ve read and appreciated your kind words ❤️

The Aussie diver retired in 2016 and moved to the UK in March this year.