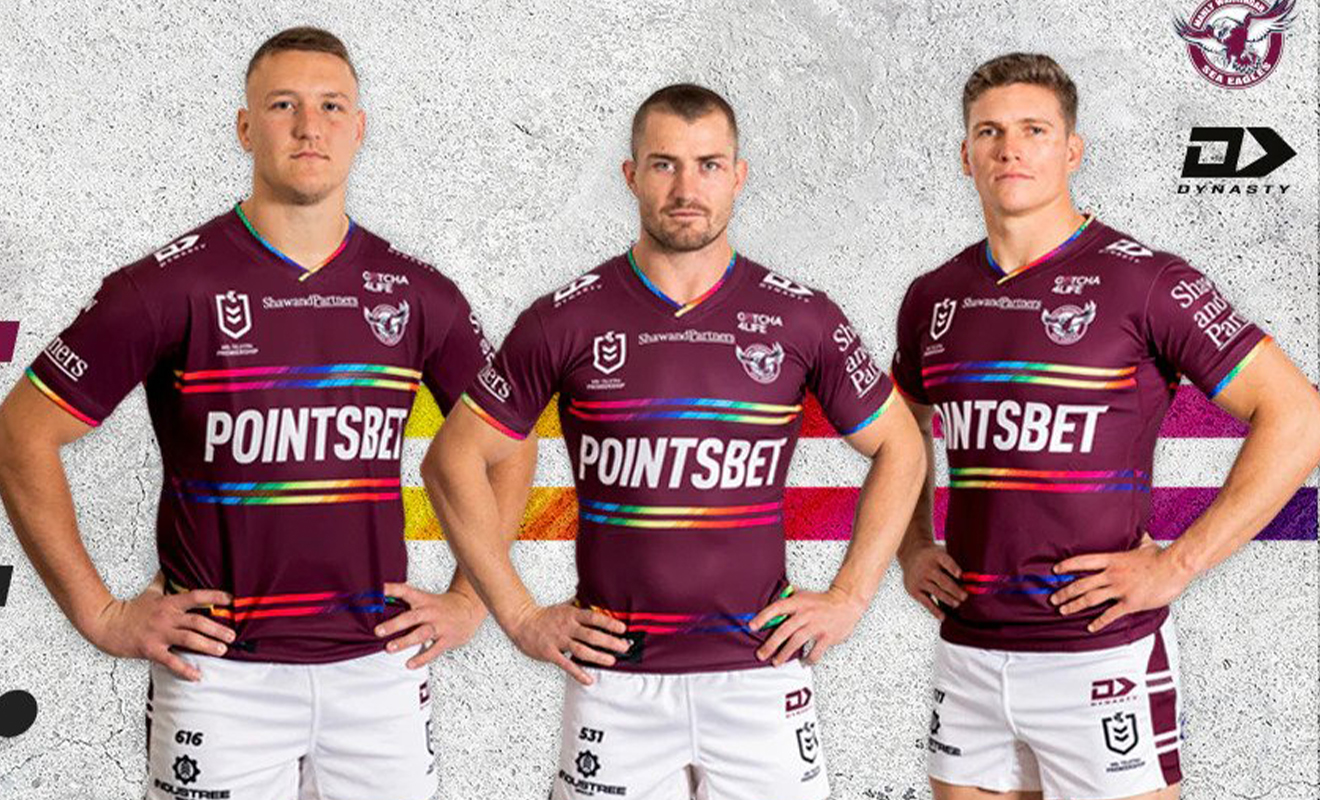 A group of NRL players from the Manly Sea Eagles club are choosing to opt-out of a game on Thursday, July 28 due to new Pride jerseys being rolled out for the team. The players cite religious reasons for not donning the jerseys and have sparked a fierce debate among fans and club members alike, reports News.com.

THERE ARE STRONG VIEWS ON BOTH SIDES

The Manly Sea Eagles are the first club in the NRL to attempt to incorporate an inclusive Pride jersey into their uniform. Tensions are rising as seven players refuse to participate in the crucial Thursday game, which threatens the team’s chances of making it into the top eight finals, reports SBS News.

The team’s coach Des Hasler has made an apology for the poor rollout of the jersey citing the disruption it has caused. “Our intent was to be caring and compassionate towards all diverse groups who face inclusion issues daily.

“However, instead of enhancing tolerance, and acceptance, we may have hindered this. This was the opposite of our intent,” he says. “We wish to sincerely apologise for significant mistakes we have made.”

Fans question those well-meaning intentions with some terming it virtue-signalling. Management reportedly didn’t consult players prior to announcing the jerseys and some feel it coercive to force players into supporting the LGBTQIA+ community when they don’t want to.

Other spectators feel that it shouldn’t be so difficult to support inclusion and diversity, especially when the religious objections that were cited don’t translate on any other occasion.

THE DEBATE HAS CAPTURED THE COUNTRY’S ATTENTION

According to SBS News, politicians such as Prime Minister Anthony Albanese have chimed in with support for the rainbow jerseys saying, “it’s a good thing sport is more inclusive”.

“Ian Roberts showed incredible courage – he wasn’t the first gay man to play rugby league – I’ll give the tip – he was the first to have the courage to come out and that paved the way for others to do so,” says Albanese.

Not all who have given their opinion are in favour of the jerseys. According to News.com, journalist and former rugby league player Paul Kent feels it is an embarrassment to force the Pride jerseys onto players.

“The club has imposed its own politics on these players and these players have inadvertently been embroiled in this scandal and they will be, hopefully, protected. But they will be under pressure now through no fault of their own,” he says.

Kent makes a valid point; tolerance and acceptance are not the same. If members of the team don’t support LGBTQIA+ inclusion, wearing a Pride jersey does nothing to change that. It is a good litmus test for how far the NRL has come with diversity, however, and it reveals certain implicit biases that still need to be addressed.

Although this debate has two vocal sides, it seems that the rainbow jerseys have sparked an uptake in LGBTQIA+ support. According to Fox Sports, fans have responded to the controversy by purchasing all the jerseys on the Manly Sea Eagles site. If nothing more, the fans have spoken.