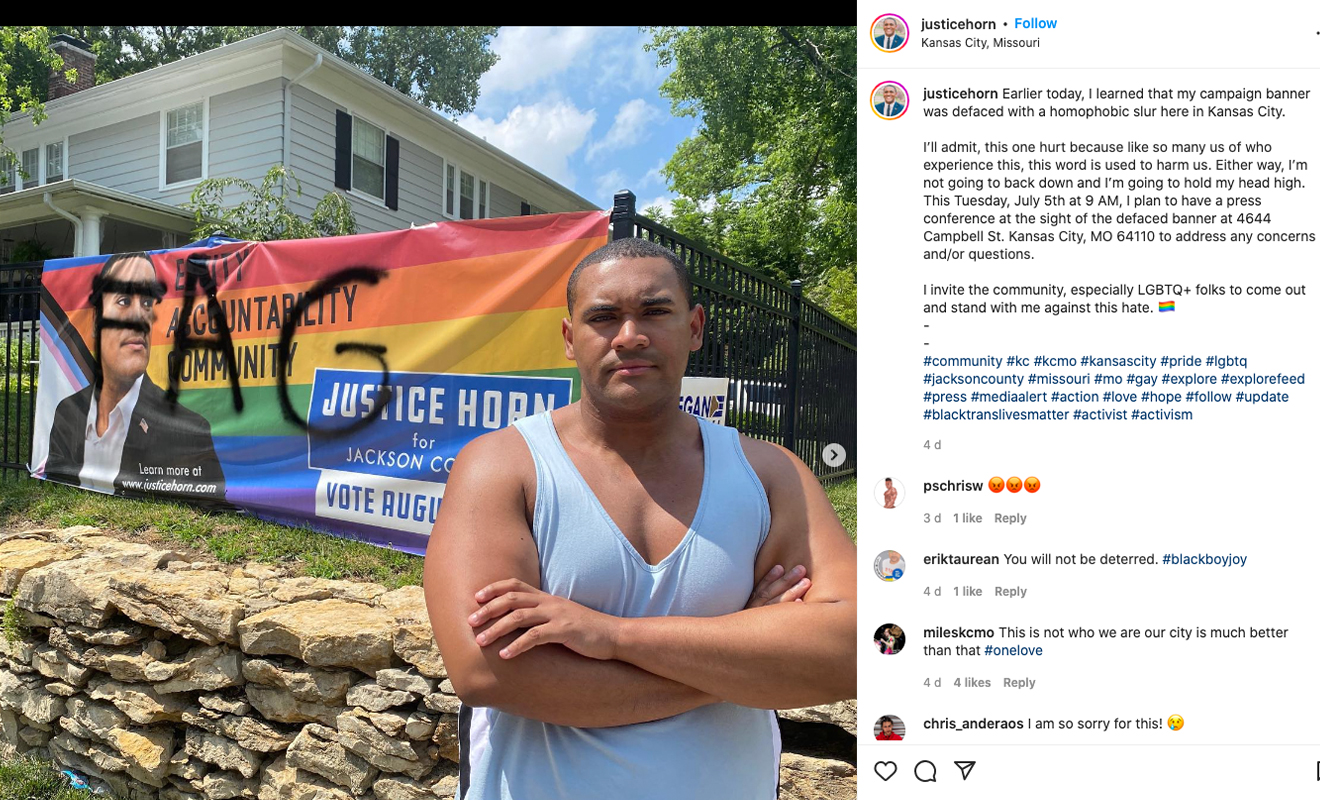 On Monday, July 4, former NCAA wrestler Justice Horn, who is running to be the first openly gay politician elected to the Kansas City Legislature in Missouri, posted to Twitter with a disturbing photo displaying his campaign signs defaced with the F slur. Horn says he isn’t letting the vandals win, reports Pink News.

HORN MAY BE A FORMER WRESTLER, BUT HE’S STILL GOT THE FIGHT IN HIM

Though politics can be a brutal game, Horn is reportedly using the defacement as a platform for encouraging acceptance and diversity in his community. The day after Horn discovered what was written on the signs, he decided to hold a press conference at the sight, believing there is value in calling out hate.

In a surprising yet heartwarming show of community strength, members of Jackson County came out to both support Justice Horn and demonstrate solidarity. Speaking to Outsports, Justice says, “I think the Kansas City community will come out to prove whoever did this wrong and elect the first LGBTQ+ person to Jackson County.

“I’ve been doing work in this community and its always shown up when it comes to issues like this. And based on Instagram [reaction], I think folks are more shocked than anything and I hope that this pushes them to action to vote on August 2, 2022. I have hope for this community.”

THIS IS ONE COMMITTED POLITICIAN

In an inconceivable act of hatred, a Pride installation at the United Church Of Christ in Kansas City was also vandalised, prompting a response from Horn. The installation comprised of six rainbow doors that once said, “God’s doors are open to all”. The graffiti over the doors read, “pervs repent”.

Pictures on Horn’s Instagram that showed the vandalism also showed the community coming together once more to return the artwork to its former message of love and acceptance.

Despite being battered down by hateful messages, Horn is still committed to becoming the first Jackson County LGBTQIA+ seat member and continues to rise above the backlash.

“We can’t run scared, that’s what they want us to do,” he says. “We need to stand up to our oppressors and we need our allies to do the same,” reports The Kansas City Star.