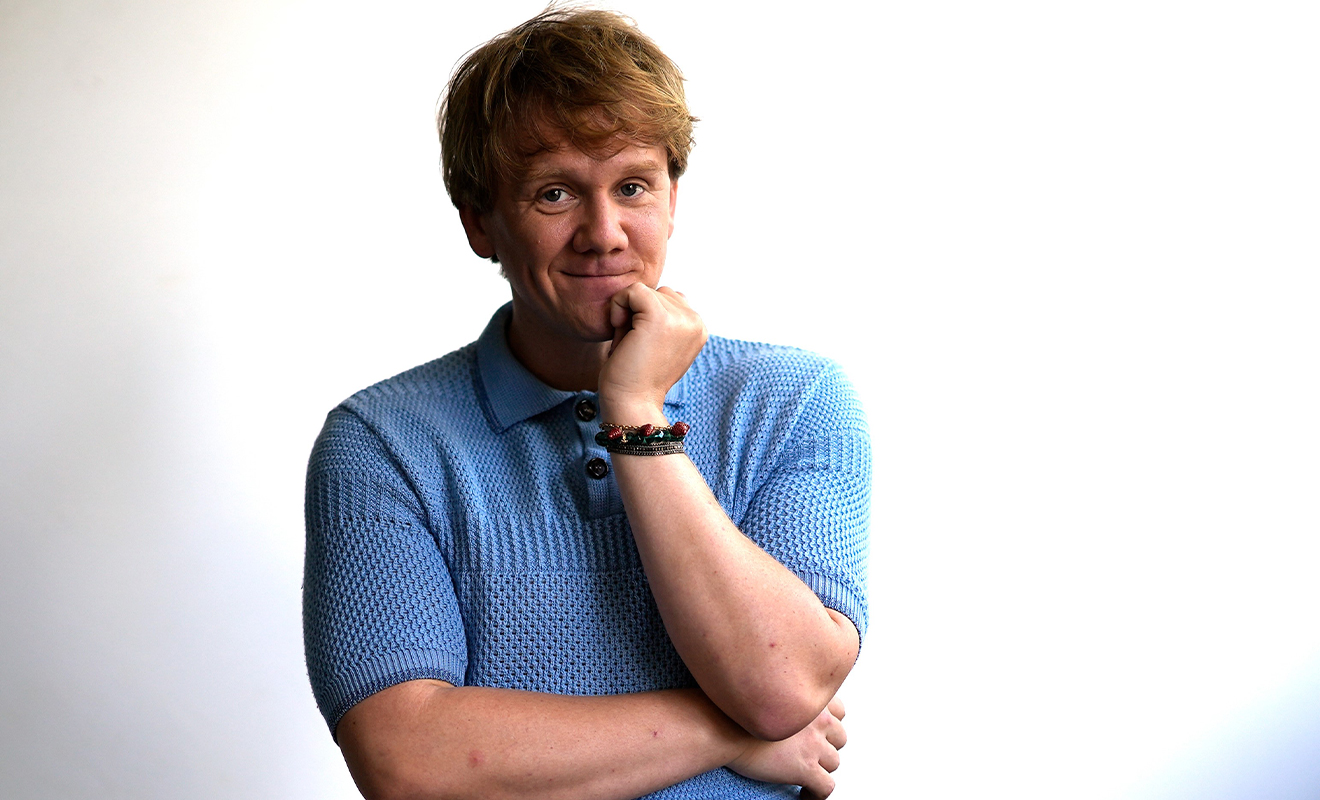 Josh Thomas for How To Be Gay (Supplied by Audible)

Josh Thomas (Please Like Me and Everything’s Gonna Be Okay) has come out twice – once as gay and recently as autistic. He brings his no-filter, deadpan humour to his new podcast, How To Be Gay.

DNA: Do we really need a manual on how to be gay?

Josh Thomas: [laughs] Obviously, the title’s dumb. It should be easy to know that about yourself, right? It took me so long to work out I was gay. When I was younger, I’d type dumb things into Google that Google couldn’t answer. The point is there are a thousand different ways to be queer.

What things troubled you when you were settling into your life as a gay bloke?

I told my dad in a text. Then my mum calls and said, “What’s this I hear about you having a boyfriend?” I said, “Mum, I’m on the train, I can’t talk right now.” And we never spoke about it again.

In the podcast, you reveal many personal insecurities – your own and other people’s. What stood out?

I’m not easily shocked but the things that really stuck with me are the conversations with Tony Kushner [playwright of Angels In America], David Sedaris [gay author and humorist], and Dan Savage [gay sex columnist]. They’re fans of Please Like Me and that opens a lot of doors.

Joel Kim Booster [Korean-US comedian, Fire Island] tells a story that begins with: “This is a big part of my backstory. My parents read my diary and figured out I was gay and it got violent and I was sent to a psychiatric hospital.” And there’s something about his flippant tone as he tells his story that we’re so used to when queer people tell these devastating coming-out stories that I’d never considered. That stuck with me.

The podcast is hilarious with a lot of information and challenges for the listener. Most of all, it’s warm-hearted, but there’s stuff that’s truly shocking. Tell us about Angel.

I’d read Angel’s story in TIME a while ago. At the time their name was Amin Dzhabrailov. They were living in Chechnya and were rounded up by the government and tortured in horrific ways. I read about them five years ago and sometimes you’ll read news from another country that’s so traumatic you compartmentalise it and go on with your day? I read it in the morning and then had a lovely day. That night I thought “Fuck, that was a crazy thing I read this morning” and never thought about it again, the way we do when we consume this kind of world news.

I had the chance to interview them and I was so nervous. I was on set for filming so I had 20 minutes to prep and I Googled Chechnya and there are all these burning buildings. I freaked! I thought: “How am I gonna connect with this person?!” I’m absolutely not Anderson Cooper. I want to talk to Angel, get to know them, and put a human face to that horrific article I’d read a few years ago.

Really powerful storytelling can bring about change, and that’s what I wanted to do with Angel. Get to know them, understand their point of view, who they are.

They’d watched Please Like Me. It’s very difficult for me to imagine what someone who grew up in Chechnya in such a toxic anti-gay environment is getting out of Please Like Me. I wonder what they think about the baking scenes after the hardcore gay sex?

You’ve come out as autistic and you’ve got this great show about a person on the spectrum, Everything’s Gonna Be Okay. Why is everything gonna be okay?

[laughs] I still don’t really know if that title is sarcastic or not. I don’t think it is. And I don’t think everything is necessarily gonna be okay. But things pan out in the end, right? I don’t have anything prophetic to say about it. I just thought it was a cute title for a show about a guy ill-equipped to be the guardian of two young people.

The Audible media release for your podcast says it’s “unflinchingly honest”, but you are that in everything, aren’t you? Perhaps due to not having a filter?

Me being unflinchingly honest is definitely autism. I don’t know how to lie. And, you’re right, I don’t have a filter, and what that feels like is I find out what I’m saying as I say it. Which is terrifying, especially considering the job I do. I just don’t get embarrassed about things others think I should be embarrassed about.

What was the hardest thing to reveal in the podcast? Perhaps, that you only top, never bottom?

Well, I don’t bottom and I’ve avoided saying that for a long time, and I don’t know why it was such a hang-up for me. It’s so embarrassing to not be able to put a dick in you. I’ve tried, but I just can’t do it. And I feel really dumb about it. Previously I was careful not to lock that down in my public persona. ‘Cos it’s like this fine line for me where I think it’s really good and important to be open about sex, and to be sex-positive, and to not treat it puritanically, and not censor people’s sex lives. But also I don’t really want any of the listeners to imagine me having sex!

To read the full interview with Josh grab a copy of DNA #270.

How To Be Gay by Josh Thomas is out now on Audible. Free with a two-month trial.

Related Items:Everything's Gonna Be Okay, How To Be Gay, Josh Thomas, LGBTQIA+, Please Like Me, QandA