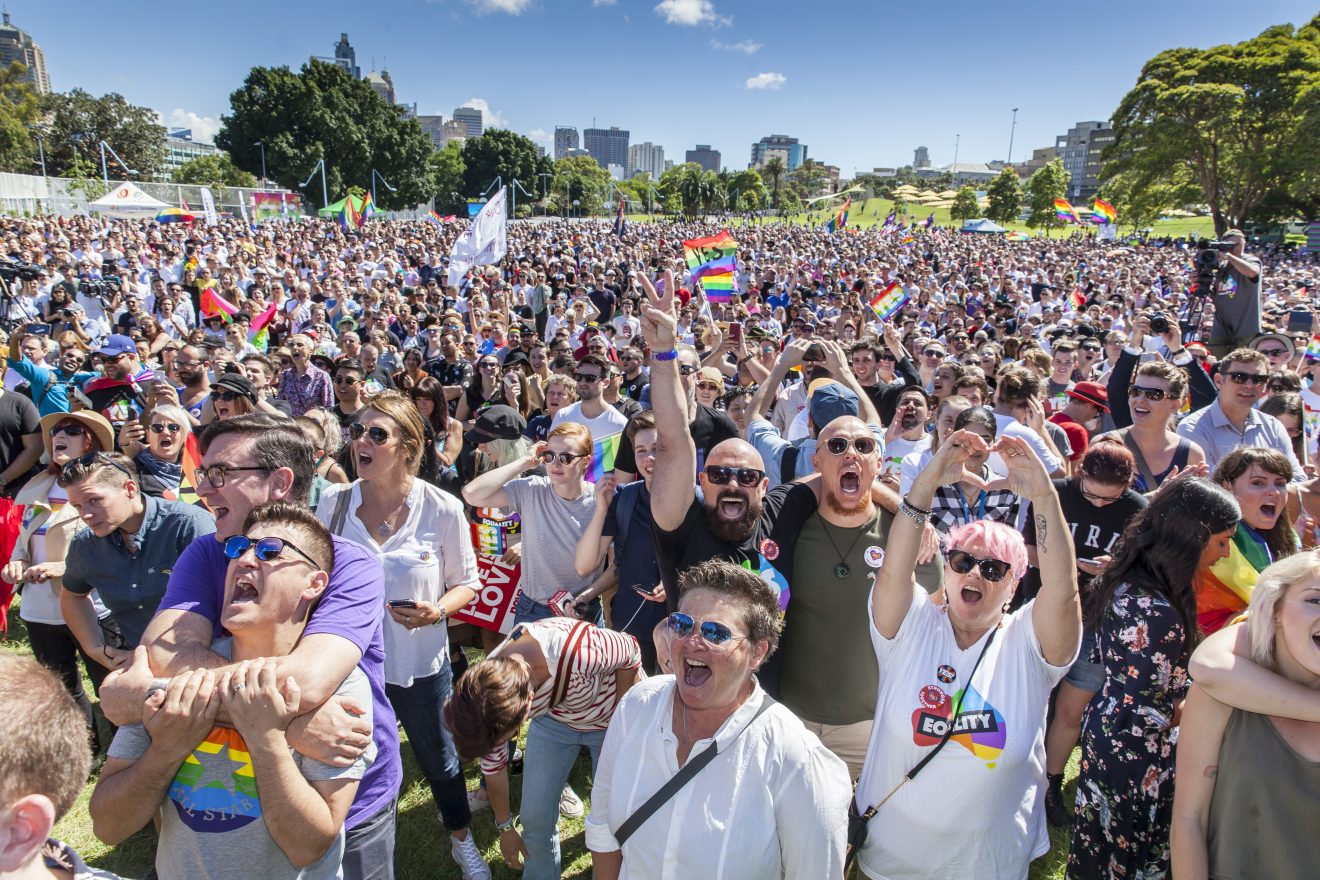 DNA: For years, before the postal survey, opinion polls showed that Australians supported same-sex marriage. How did that effect the way the Yes campaign was run?

Alex Greenwich: There was strong support in Australia, and that was consistent across all polls, so the challenge of the postal survey was to make sure that support was reflected in the result. We had to make sure people filled out their survey forms and returned them and encouraged everyone else to do that same. We still had to put forward the case for marriage equality, and we still had to defend against the nonsense that was coming from the No side, but a core component of our campaign was, “get out and vote”.

Who did you need to target?

It became quite clear, towards the end, that 18 to 24-year-olds, although huge supporters of marriage equality and who’d indicated they would be returning their survey, were not doing that. We directed a lot of advertising to them.

Was there a particular message that resonated with them?

The message was about empowering them to help make Australia a fairer and more equitable place; that by voting they were making a difference.

The No campaign relied on fear and misinformation. Was that expected?

Yes, certainly, and they imported a lot of their campaign from the US. The disturbing thing was that they had a national platform that was damaging to many LGBTIQ people. The other disturbing aspect was that some media outlets took the view that they were compelled to ventilate the No side’s argument for the sake of balance, regardless of how inaccurate or damaging they were.

What was the lowest point of their campaign?

When they ramped up their attacks on the trans community, particularly targeting trans kids; a vulnerable subset who are already disadvantaged by bad public policy. That was truly appalling. They also shaped the narrative as “the gay community are bullies who are forcing you to support marriage equality”. I don’t think most people believed that, although a number of right-wing media outlets ran with it.

People who followed the campaign closely would’ve seen you doing countless interviews, answering the same questions over and over. Did you feel like you were trapped in a Groundhog Day loop?

How many times were you asked about gay wedding cakes and boys being forced to wear dresses to school?

Right! There were interviews where I tried to stay calm but sometimes I needed a glass of wine afterwards.

You become the public face of the campaign, and that came at a personal cost – vicious hate mail, numerous death threats. How did you deal with that?

The intensity of it was rattling. I got a lot of support from the New South Wales Police and my husband, Victor who would say at various points in the campaign, “Turn your phone off, we’re going for a bush walk now.” When attacks were coming thick and fast – and people think this is a bit bizarre – I actually went out canvassing. I’d go to Martin Place or go door knocking with volunteers to prove to myself that the attacks that were coming in through social media or to my office were not representative of Australians. One Sunday afternoon I had to call the police on two individuals. The following Monday morning I was out at Martin Place handing out flyers and the positive response from people, well, that was really the best thing to compensate for the attacks.

How did you feel when Tony Abbott suggested that the violence that occurred during the campaign had mostly come from the Yes side?

That was an ill-informed statement backed by absolutely no evidence. I was fortunate enough to have a certain level of security but it made me concerned for people who didn’t have that. It was a tactic for the No side to claim victim status, and it was a tactic that resolutely failed.

How did you feel when Malcolm Turnbull took credit for achieving marriage equality?

The people who deserve the credit are the 15,000 volunteers who worked on the campaign. For the Prime Minister, or myself, to try to take that victory away from those people – it’s not the right thing to do.

On the day the legislation was passed in Federal Parliament, a lot of MPs attempted to take credit where it wasn’t due.

That was frustrating, but what made up for that was that the parliamentary debate was led by the gay and lesbian MPs and senators. To see Dean Smith [Liberal] introduce the bill, followed by Penny Wong [Labor], followed by Janet Rice [Greens] and Louise Pratt [Labor] – to me it was a moment where we had finally taken control of the issue.

What do you think the postal survey revealed about organised religion in Australia?

It showed that you can trust Australians to do the right thing, regardless of their faith. It also showed that there are organised elements of the religious right-wing who are very strategic in their targeting, and we particularly saw that in Western Sydney, where targeted campaigns of misinformation were run in multiple languages. Our campaign was focused on the whole of Australia, theirs was focused in ten-square kilometres.  Cory Bernardi, particularly, used it as a platform to build a database for his new political party. Some, who thought they were not going to win, saw it as an excellent opportunity to build a database and fundraise, and that’s a scary proposition because they have lots of money and they want to continue to cause damage.

Is the inquiry into protecting religious freedoms just an excuse for churches to find ways to legally discriminate against LGBTIQ people?

I hope not. My experience appearing before the panel was that we had a robust and respectful conversation. I was there with LGBTIQ people of faith and the impression [I think] we left them with was that sexuality and religion should not be in conflict. What we need to be doing is dispelling the “gays vs God” myth and working on building trust. I’m hopeful that there were won’t be any perverse recommendations that come out of that review.

The government reportedly has $40 million left over from the allocated $122 million for the postal survey and it’s been suggested that be spent on LGBTIQ health.

Absolutely. And particularly for the trans community. They were the No side’s target.

Does Australian Marriage Equality have campaign funds left over? What might be done with those?

Lyle Shelton (formerly of the Australian Christian Lobby) has joined the Australian Conservatives, whose policy states: “We commit to supporting families by defending the traditional definition of marriage…” Can you imagine marriage equality being rolled back? It has happened in Bermuda.

The situation in Bermuda is very different. They have a very conservative government with strong evangelical roots. It’s a scary prospect, Lyle Shelton entering federal parliament, but if he sought to introduce such legislation it would not pass. The support for marriage equality in the parliament was a landslide. The large number of LGBTIQ MPs and senators would work hard to protect that from happening.

How did you and your husband, Victor celebrate the Yes win?

On the 7th of December when the legislation passed, I was in Canberra and it was great, but I had a sudden urge to fly back to Sydney and have a quiet dinner with him.

And you slept in the next day?

Did you go to Christine Forster [Tony Abbott’s sister] and Virginia Edwards’ wedding?

Yes! It was wonderful. Lots of people had it tough during the campaign and I think Christine and Virginia and both showed amazing leadership. It was wonderful to share the celebration of their wedding. They worked so hard for that.

Did you have a word with Tony?

What’s next for Alex Greenwich?

My day job! I’m focused on my role in the New South Wales parliament.