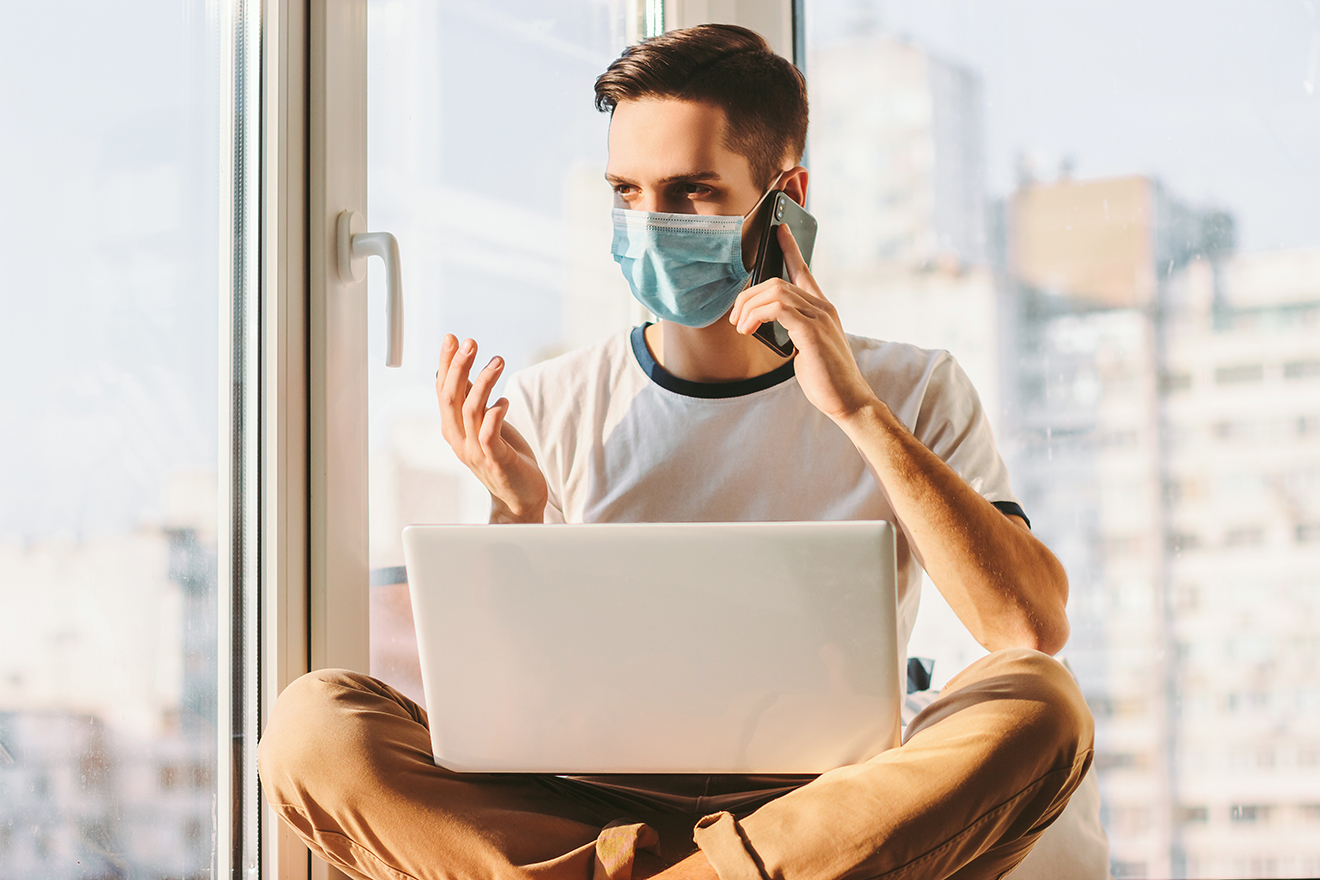 Men are great! Except when it comes to discussing our mental health. Why don’t we don’t reach out, and how we can take better care of ourselves and each other?

My weekly battle for loo roll and pasta has started to feel like my only social outlet! Now in lockdown in London, my Friday nights out, Saturday brunches and Sunday walks can only be enjoyed vicariously through old social media posts.

Interrupting these rosy vignettes has been an increasing number of ridiculous tasks and challenges posted on Facebook. Calls to do ten push ups, learn some new dance, or cause John Lennon to turn in his grave (looking at you Gal Gadot), are increasingly interrupting my daily ritual, forcing me back into the same four walls I’ve stared at for weeks now. I usually scroll past them, anxious to get back to another #throwback of the Aussie smashed avocado brunch I once took for granted.

However, a new challenge has broken this habit.

Amid the more ridiculous posts has been an important campaign to raise awareness of men’s mental health. The challenge calls for men to post a picture of themselves with a caption that lets other men know that they are free to talk, alongside a list of friends who are then nominated to do the same.

You may have scrolled past it, for which I can’t blame you. Who really pays attention to a selfie of John from Barrington Tops when an ad featuring a shirtless Chris Hemsworth is just a swipe away? However, the challenge struck me. It forced me to think about the devastating effects this virus could have, not just on our physical health, but on our mental health. In epidemic of illness, isolation and redundancies, I realised that maintaining good mental health may prove to be just as challenging as maintaining good physical health.

This is true even during the best of times. Let’s consider some rather chilling stats from Australia. Last year, over 3,000 men died by suicide. That’s nearly 60 men a week, or eight men a day. And research suggests that a disproportionate number of these men belong to our LGBTIQ community; gay men account for nearly 15 per cent of all male suicides while 25 per cent of teenagers who die by suicide are LGBTIQ. It has also been estimated that 72 per cent of Australian males don’t seek help for mental ill-health.

Understanding, and discussing, the causes behind our mental ill-health is therefore of critical importance.

Gay men are undeniably predisposed to issues of mental ill-health. Part of this likely stems from our childhoods. “Tell me about your childhood” has often been used to ridicule psychiatrists and discussions of mental health but for the LGBTIQ community, the experience of growing up as a minority is undeniably a cause of mental angst.

Rejection by family is one clear example of this. Thankfully, we are living in an age of increased acceptance; the likelihood of being thrown out of the family home is far lower now than it once was. However, it is still a possibility. Most DNA readers, while still grappling with their sexuality and before coming out would have contemplated that “what if” question. Who among us didn’t think, “Okay, I know my family will love me no matter what but… what if they don’t? What will I do?”

Having to contemplate a scenario in which your family reject you at a young age is horrifically traumatic, and likely a further cause behind our catastrophically high levels of teenage LGBTIQ suicides.

I realise the closeted years of many readers will be but a bad memory, but that doesn’t mean we’re in the clear. These issues persist years after leaving the closet. How many of us are guilty of lowering the pitch of our voice when we pick up a call to an unknown number, or “straighten up” as we head into a job interview? How many of us have worn a jacket out to the club, not to protect us from the cold, more to protect us from anyone who wouldn’t approve of the Britney inspired look we were wearing underneath? Crossed the street to avoid a pack of rowdy men? Moved carriages to slip away from someone making you uneasy? Avoided a family lunch because Uncle Henry, who always asks provocative questions, is there? Not discussed a new boyfriend because you know that Sarah goes to church too much and she probably deserves a break from having to contemplate Sodom and Gomorrah?

We should be proud of who we are, wear that look, strut down that pavement and challenge that homophobia. But there’s no denying the fact that we live in a world that often tells us that we shouldn’t be proud. A world that can, at times, be discriminatory and prejudiced against us. This experience of constantly, subconsciously, checking ourselves, to lower our “gay-ness” and increase our “man-ness”, takes its toll and leads to a persistent hum of anxiety and stress. This is what psychologists have called minority stress, and it is a very real cause of mental ill-health in gay men.

This angst is not just from outside our community. Whether we mean to be or not, gay men can be cruel. The most extreme expressions of this can be found on Grindr, where endless profiles of glowing six-packs are sometimes accompanied by “no fats, femmes or Asians”. Such prejudice can metastasise into the real world. We already face enough crap from outside our community – do we have to hurt each other from within?

I have to ask, why the hell do we think “manning up” is an admirable trait? Women seem to do health so well. If something hurts, smells, is late or “just doesn’t seem right”, they reach straight out for help. Not necessarily immediately to the doctor; a quick WhatsApp asking if anyone else has experienced the same often suffices.

Men, on the other hand, seem to do the complete opposite. Why, when our mental or physical health has taken a hit, do we think it so much better to “man up” and “soldier on” then simply ask for help? Instead of shooting out a WhatsApp we ignore the chat. Instead of mentioning it at brunch, we just don’t go to brunch. Instead of discussing with our partners, we go quiet and aloof.

I think back to previous boyfriends, whinging at the end of the work week because their sore throat and fever still hadn’t gone, even though they still hadn’t gone to the doctor. Weeks of ferrying chicken noodle soup up to the bedroom and snotty tissues back down had me contemplating just bringing the doctor to him! Or when another ex’s mental health took a hit, and he proceeded to flake, ghost and gaslight his way to the end of our relationship because he didn’t want “to bother someone with what has just been a bad month”. (The fact it was bothering me didn’t seem to matter!) Is this really something we should admire? Is this really something we should aspire to? I know I’d much rather date a man who was upfront with his feelings and able to both ask for and accept help.

We need to get over our obsession with manning up. Whether this be punishing ourselves in the gym because we don’t “look the part” or shutting ourselves down because we’re not quite feeling the part. We need to stop.

This brings me back to that Instagram challenge. The challenge reads: “Let’s do this for the 75 per cent of all suicides that are committed by men. Too many have already been taken too soon! We can’t keep letting this slip by us. Be strong, be there for each other and please never be afraid to speak up or try and reach out to anyone, even myself! Help is around you in a variety of forms, often only one message or Google away.”

I am not saying you should go ahead and do this (though at least give it higher priority than the bloody push-up challenge, please). Instead, I’m saying that as gay men we need to recognise that we are uniquely predisposed to issues of mental ill-health. The very fact that we are a minority is a cause for angst, even before you pile on the pressures to have a six pack, bubble butt, deep voice and never-limp hands.

Understanding some of the reasons why we’re at risk is one thing, realising that it is okay to reach out and ask for help is another. This help needn’t necessarily be your family doctor. Friends and partners are a great port of first call. If you don’t feel comfortable with that, there are plenty of other options. Some offer words of advice, like Lifeline and The Black Dog Institute. Pilot, a relatively new online health service specifically aimed at improving the health of Australian men, can instantly put you in contact with a GP, who can then refer you on for specialist help. This can all be done confidentially, online, from the comfort of your bed.

Lockdown sucks. Some of us are stuck alone. Some are back in with a family who isn’t accepting. Others are in relationships they should have left earlier. Some of us have lost jobs, savings and houses. Some of us have lost friends and family. If you are struggling, please reach out to friends, family or professionals for help. Don’t make it harder than it needs to be by suffering in silence.

If you’re okay, instead of mindlessly frittering this lockdown away through wistful reminiscence or binging banal box sets, use this time to reach out to others. If you really are #heretotalk, show it! Send a WhatsApp, a Zoom invite or even just call. Connect to friends, old and new.

Use this time to show that you are here to talk if someone needs help. Use this time to learn what it actually means to talk. Who knows… when we’re back to enjoying our Friday nights, Saturday brunches and Sunday walks, you may realise you’ve been feeling a bit off and one of these friends might just prove to be the hand you need.