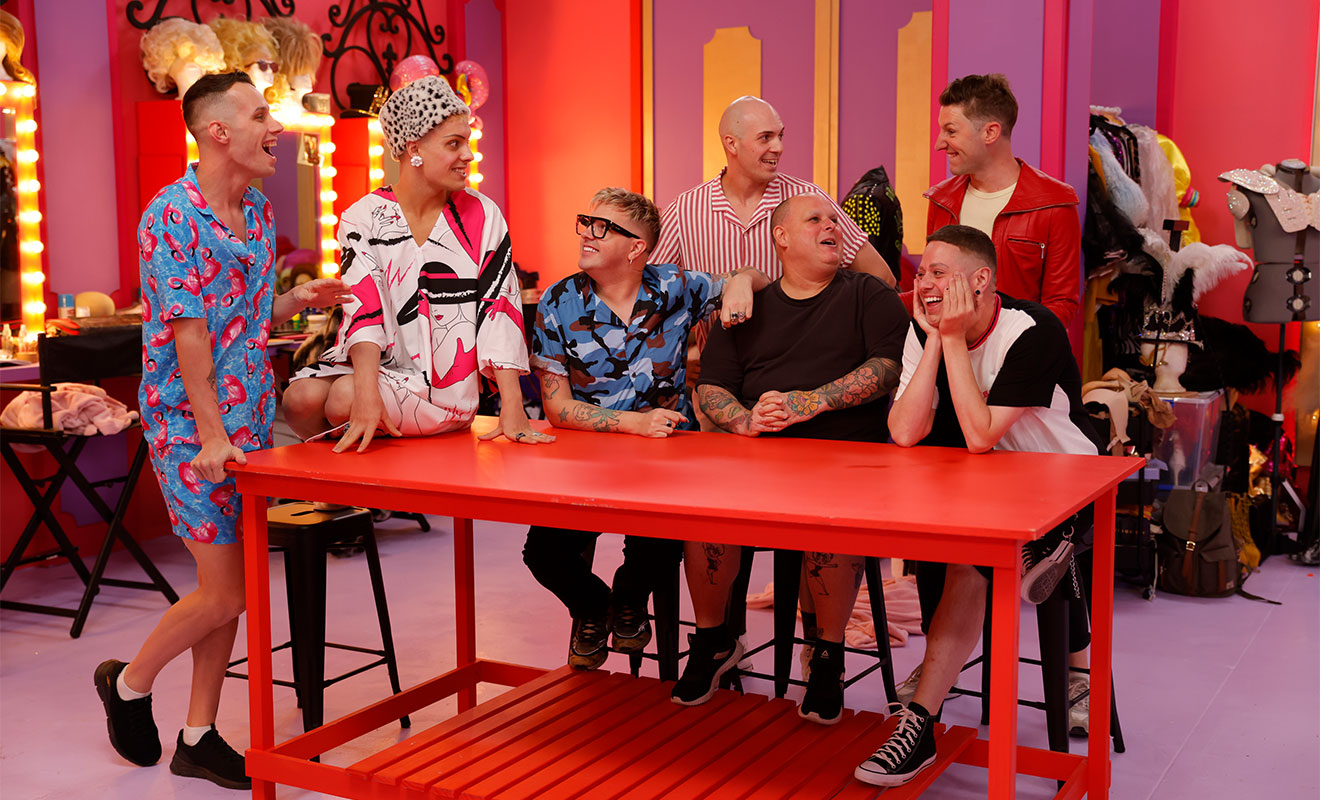 RUPAUL'S DRAG RACE DOWN UNDER (STAN)

A design challenge, the green sea witch doing more than just haunting the Werkroom, and more shade thrown than a solar eclipse.

In the Werkroom after last week’s elimination, the girls seemed to gang up on Electra Shock as she cleaned Coco Jumbo’s message from the mirror.

“The judges’ critiques said they don’t think you have much of a taste level,” said Etcetera Etcetera.

“It’s like putting glitter on a turd,” said Scarlet Adams. “It’s still a piece of shit.”

The next day Scarlet and Etcetera continued their verbal assault, while Electra seemed to be in some delusional state that the only reason she was in the bottom was because she was too good! This was followed by a lot of reading that finished with Electra stating, “I hate you all now… none of us are friends.”

“The room is starting to get a little shady this week and I’m kind of here for it,” muttered Karen From Finance.

RuPaul entered the Werkroom and announced that, “Drag Queens can turn something tragic into something magic,” and, on cue, in rolled a skip bin full of rubbish pushed by the Pit Crew wearing bulging jockstraps.

“There’s a lot of junk in there…” quipped Anita.

“Items that people have tossed away, that deserve a second chance,” said Ru. This was leading somewhere but probably not where the queens were expecting. Suddenly, from beneath the pile of junk, up popped Art Simone: “I’mmm baaaaaack!” The other girls were wide-eyed, slack-jawed and screamed the place down.

“Some of the girls don’t look happy to see me, Ru,” lamented Art. Ru informed the queens that, “Art Simone is re-joining the competition officially.”

Why? This lifeline has no apparent rationale? It’s not as if all the eliminated girls were about to compete for a return spot. Art had a bad day and lost. What made her more deserving than any other competitor who’d simply had a bad day?

“She got eliminated from the competition, so she should be staying at home,” said

Karen, articulating the feeling in the room.

The surprise twist over, it was back to the Maxi Challenge: take the cast-offs from the dumpster and turn them into gorgeous runway looks. Some of the queens had trouble understanding this concept.

Karen thought that if Art could redeem her Snatch Game with a return to the show, then she could redeem her poor performance with a Schapelle Corby impersonation. Meanwhile, Electra manifested some internal rage as she tore apart soft animals to be part of a kangaroo hunter outfit.

Ru’s Werkroom critiques with both queens reiterated that this was a design challenge and that both girls were making it harder by adding a character.

“It’s a design challenge, and looking around the room some of these people can’t even dress themselves,” said Art.

This week’s Werkroom confessional started with a question: “Does anyone else go out as themselves and get asked, why aren’t you in drag?” It seems it happens often and can be quite hurtful. It implies that their out-of-drag persona is not good enough.

Etcetera, who identifies as non-binary, talked about being so fem that people think they are in drag all the time even when they’re not. This leads to being told, “it’s just a phase” or hurtful judgements like “make a decision” or accusations that they’re a fake because they’re not transitioning all the way. Etcetera says, “I don’t connect with all of my biological body… I use the gender marker non-binary because it’s the closest to what describes how I feel… People like to think of things as black and white but there’s so much grey.”

They went on to thank the other girls for being so respectful and kind about their gender as it doesn’t happen often. That’s the thing about drag queens, said Karen, “we stand up for ourselves and each other and what’s right.” A touching and enlightening moment in the midst of a contrived reality television format.

So, here’s how the runway went down. Electra took Ru’s advice, was congratulated and moved to safe this week together with Kita. Yes, Kita, whose look, made with plastic balls and some tarpaulin, was undoubtedly the weakest. So go figure!

Maxi went from always bottom three to top three with a Vivienne Westwood-inspired, drag bag grunge/punk lewk and was congratulated on elevating herself based on previous critiques.

Art’s all pink nod to Marie Antoinette had her share top three. Scarlet was the winner for a second week in a row. Her picnic basket on legs with tailored red gingham shorts was new and beautiful.

“I did not peg her to be this girl. I didn’t peg her, period,” admitted Michelle Visage.

Etcetera, who wanted some critique after always being safe, was less than happy when she finally received it, and found herself in the bottom three.

Karen’s failure to take advice and Anita’s rehashed book dress had the pair lip syncing for their lives to Danni’s I Begin To Wonder. It’s a difficult song in some ways as it doesn’t provide the usual opportunities for drag queen dramatics. In the end, it was Karen who sold it best.

Anita’s positive outlook and hyper personality will be missed, and as she made a graceful exit, Karen and Kita wept. Another touching and real moment!

RuPaul also found a new word to add to the Drag Race lexicon courtesy of Michelle. The combination of glamorous and ridiculous became the soon-to-be-over-used “glamdiculous”.