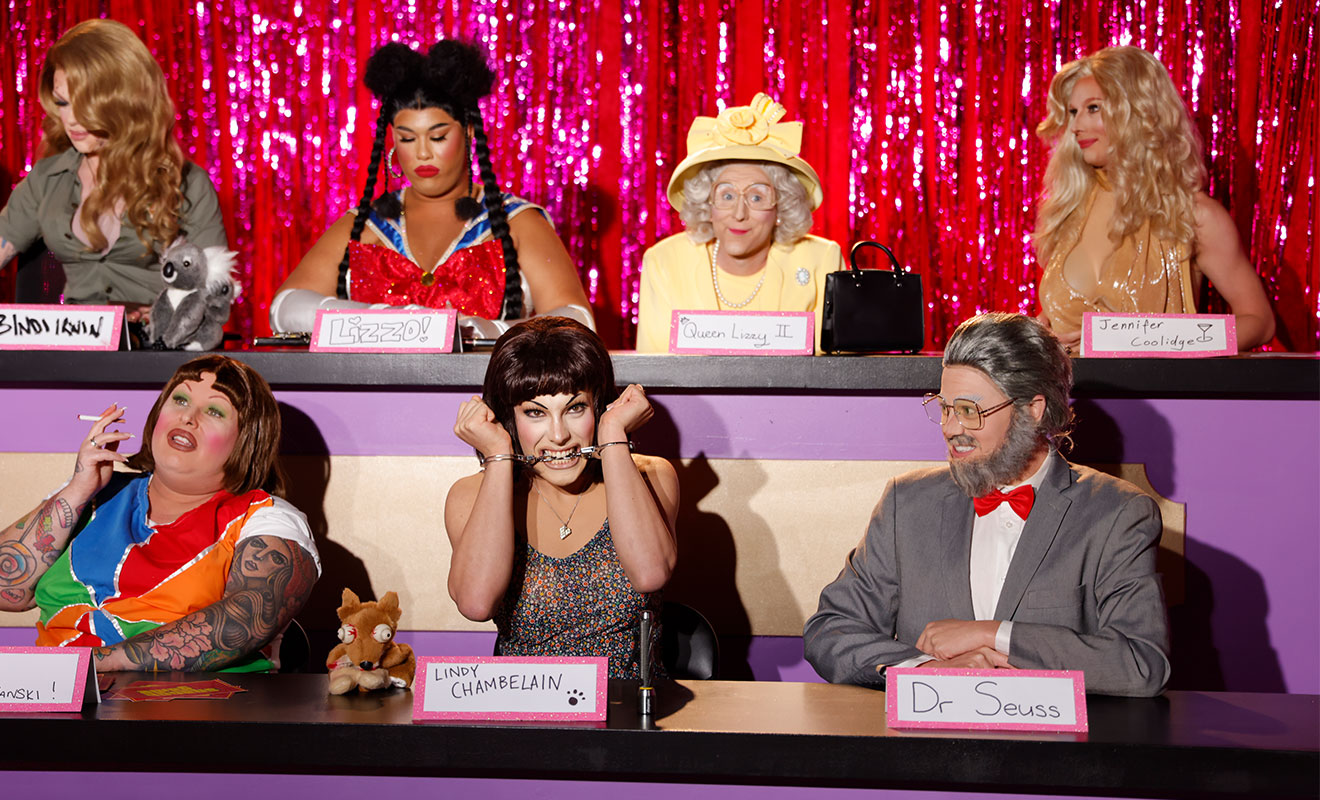 RuPaul's Drag Race Down Under (Stan)

I said love, I said pet, I said a dingo’s got my baby, I said crickey, it’s The Snatch Game already.

The episode began with the queens returning to the work room after last week’s runway. Art Simone was not happy about being the runner-up. “It’s now every woman for herself,” she says, “welcome to Drag Race.”

The editing makes us think there’s conflict brewing between Art and Karen From Finance. Electra Shock, her confidence buoyed from her lip sync win and Karen declaring, “I’m scared of you,” was immediately cut down by Kita Mean with, “and not just your make-up”.

The new week started with the Aussie girls introducing their Kiwi cousins to the “delightful” pastime of “shoeing” (translation: drinking alcohol from a shoe). At least they used a nice court shoe with a high heal. Scarlet Adams wondered if next week the New Zealanders would bring in a sheep and they’d all take turns fucking it. Oh, the shade of cultural stereotyping!

Then, OMG, the work room television came to life they all started gagging because it was Kylie Minoque! After some compliments and cryptic clues to this week’s challenge, RuPaul entered and announced they’ll be playing The Snatch Game. The queens are shocked but get down to work. Art and Scarlet both want to do Bindi Irwin as their character. Did the seasoned Art bully the young ingénue Scarlet into changing characters or was that just the editing again?

Dad joke alert! Last week we were introduced to “kanga-Ru”. This week Art finished a one-on-one with Ru with “whoo-Ru” (good-bye). How many Ru-isms will we be subjected to over the season? Will it Ru-in the experience?

In this week’s work room confessional, the queens talked about parental support. Anita’s TVSN presenter façade dissolved when she discussed her parents’ separation. As a seven-year-old, he left for New Zealand with his mother. As his father said goodbye to him, he asked him to promise he wouldn’t turn out gay. This had a significant impact and, because of the guilt he felt, he didn’t come out until he was 20. However, he also said he still admired and loved his father.

The Snatch Game started strong for all except Kita Mean’s Dr Seuss. Maxi Shield’s impersonation of the Magda Szubanski character Lynne Postlethwaite was flawless, leading Ryhs Nicholson to suggest Magda may sue. Etcetera Etcetera’s Lindy Chamberlain line, “I went back to the tent and a dingo’s got my answer,” had Ru exclaiming, “We’re all going to hell for this.”

Highlight of The Snatch Game was Anita Wigl’it’s joke as Queen Elizabeth: “When people turn 100 I write them a letter, when they turn 16 Prince Andrew sends them a text.”

All the queens came away from the challenge congratulating themselves on the “strongest Snatch Game ever”. Ru, on the other hand, declared JoJo Zaho the winner because “she got to go home last week and didn’t have to endure any of this”. Ouch!

The Sea Sickening runway had the judges gagging on a few lewks but cringing on others. Karen’s sequined shark, Scarlet’s Great Barrier Reef and Anita’s siren were stunning. On the other hand, Electra looked like she was wearing grandma’s lace curtains.

On the judging panel this week was RuPaul herself. We assume that either her make-up or a raven from Winterfell finally arrived in Auckland. After declaring Anita this week’s winner, the climactic curve started its ascent when not three but six queens were told they were up for elimination.

Back in the work room, Dannii Minogue zoomed with the queens. It was all fun and smiles except the queens were still distracted with the thought of looming elimination. The six bottom queens were all understandably on edge.

While it wasn’t a surprise that Coco Jumbo finished in the bottom three, the episode turned upside-down when early favourite, Art together with Maxi were added to that group. Maxi, much to her relief, was sent to join the other girls, whose jaws were all on the floor, leaving Art and Coco to lip sync for the lives to RuPaul’s I’m That Bitch. Art appeared lost, flailing about the runway, while Coco was spot on with her moves and expressions, leaving her the winner and Art sobbing her way off stage.

Has Ru just hooked everyone on the season by turning it on its head? If Coco had gone, would the blogosphere discussion be so intense? As Ru reminded everyone, the final decision is hers.

Art’s departure from the work room is no less dramatic as she sobs, “I’m the strongest one here, I will never live this down,” and that the idea of just participating “means nothing”. Did the best drag queen just blank?