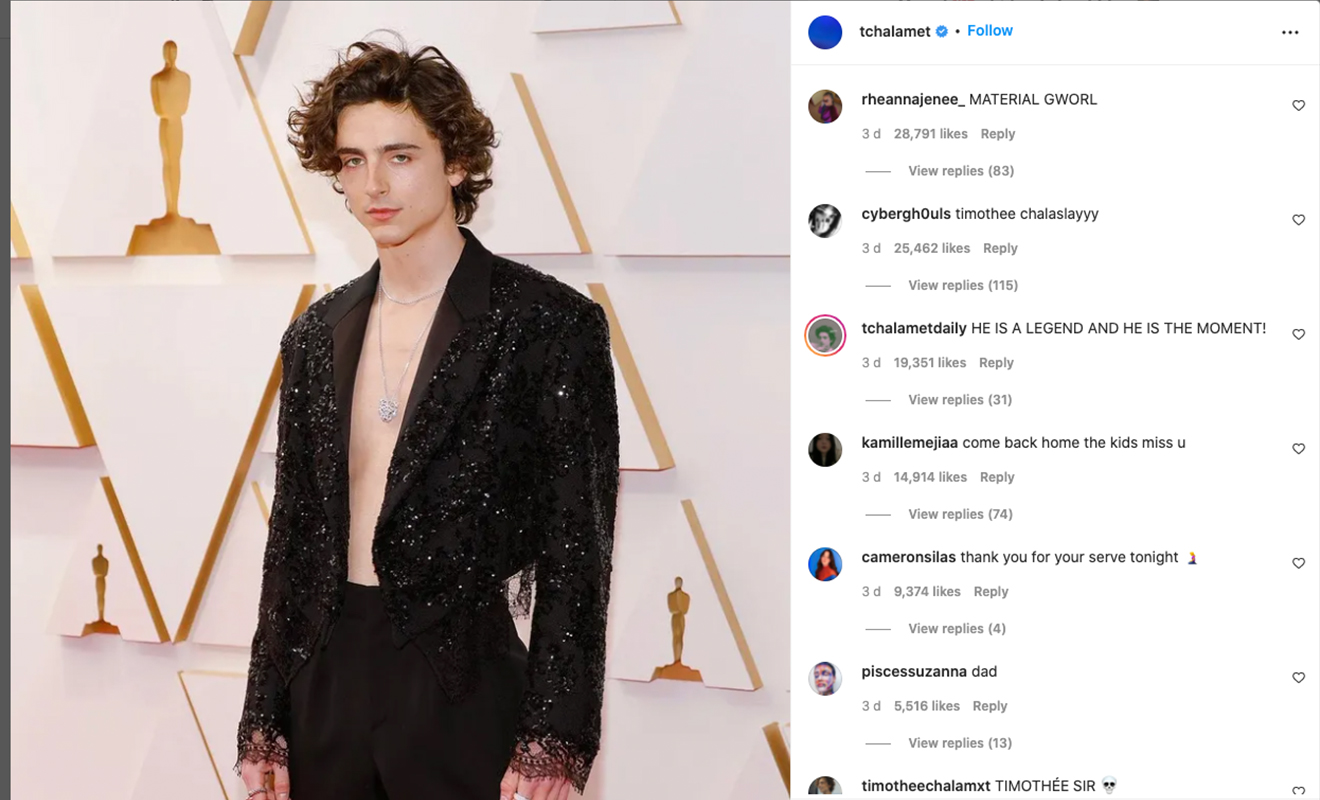 It’s been a few days since the Oscars and the night truly gave everyone a lot to think about for a minute. But now we’ve had a some processing time, let’s discuss the outfits.

We all know that when it comes to red-carpet events, the women are the showstoppers. In saying that, the male celebrities have begun stepping their game up with their wardrobe decisions (at least not just a black tuxedo) and fortune favours the bold.

Kodi is known for being a bit of a style icon and he did not disappoint this time around wearing a well-tailored, mint Bottega Veneta suit with Cartier accessories.

Timothée Chalamet burst into the industry in one of the most widely-recognised MLM films of the 21st century – Call Me By Your Name. Since then, he has amassed international fans and praise for his talent and, of course, his good looks.

Timothée Chalamet is serving us the female gaze á la Harry Styles with his black, detailed Louis Vuitton suit worn sans shirt. It has been one of the most talked about men’s outfits from this Oscars.

This was newcomer Simu Liu’s first time attending the Academy Awards and he definitely did it right. Simu Liu is known mainly for his role in Marvel’s Shang-Chi And The Legend of The Ten Rings.

Unlike a lot of his actor peers, he opted for something a little more memorable than the classic tux. He wore a red Versace suit with detailing across the breast that gave a regal look.

Known for his stellar performances in Selma and Queen Of Katwe, David Oyelowo did not show up under-dressed.

Paying homage to African-based designs, the British actor wore an intricately-patterned suit from the designer Kutula.

Brad Goreski is known for his part in hosting Fashion Police and judging on RuPaul’s Drag Race Canada, and after seeing his look at the Oscars, it definitely feels right to have him on this list.

The singer Sebastián Yatra was in attendance and the Colombian superstar did not shy away from colour at this awards show. Sebastián is best known for his Latin pop hits and for performing songs on Disney’s Encanto soundtrack.

To the Academy Awards, he wore an all-pink, custom Moschino suit which might have drowned out another person, but looked fabulous.