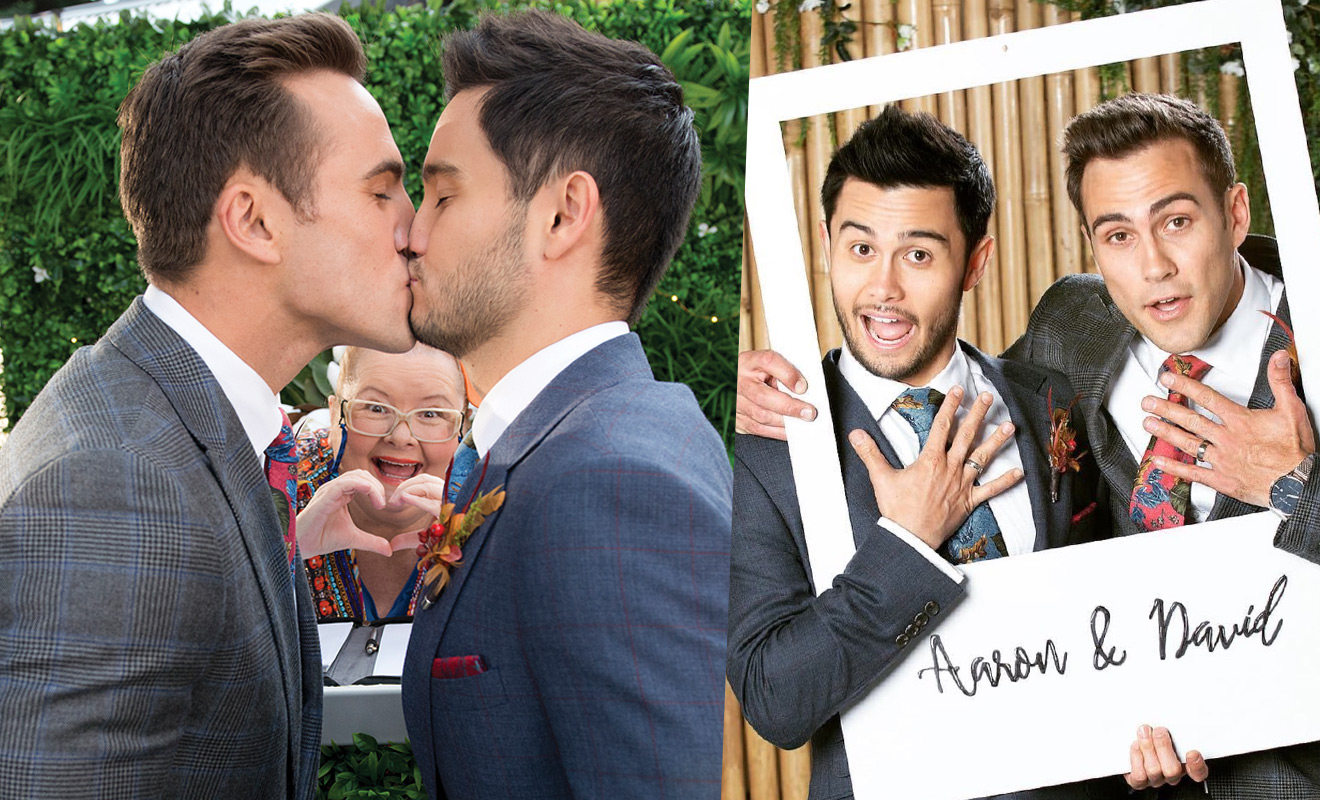 Television’s hottest gay couple, Aaron and David, are about to get hitched. For the behind-the-scenes scoop, DNA visited the set of Neighbours to speak with actors Matt Wilson and Takaya Honda.

For many Australians, long-running television drama Neighbours is as quintessential as Coronation Street is to the Brits or Days Of Our Lives to North Americans.

Soon to clock up its 8,000th episode, this is the neighbourhood that once housed the three Hemsworth brothers, Russell Crowe, Margot Robbie, Guy Pearce, Jesse Spencer, Natalie Imbruglia, Delta Goodrem and, of course, Kylie Minogue.

Contributing to the longevity of the show has been the producers’ and writers’ efforts to move Erinsborough and its residents along with the times. In the past few years it has broken new ground with the introduction of LGBTIQ characters and storylines.

For Matt and Takaya, the significance of their characters’ marriage is something they don’t take lightly, especially considering last year’s historic same-sex marriage win for Australia.

“As actors, we’re really fortunate to be given the opportunity by the writers and production team to play these roles, and to be put in this position where we are the first same-sex marriage in an Australian television drama since it was legalised,” says Takaya. “That’s something really special; being the first, and that’s something we’ll always have.”

“We’ve both felt the responsibility from the get-go,” says Takaya. “It’s something we’ve been working towards for a long time, and we’ve tried to foster a relationship that the audience would barrack for when the time came where we could get married. Fortunately, it seems like the audience is on our side. This moment has worked out in a really beautiful way.”

Matt agrees and points out an interesting coincidence. “When we originally filmed the proposal scene, which was actually the failed proposal before the successful one, it went to air the day before gay marriage became legal in Australia. So while we didn’t know that would happen at the time of filming, we did get an insight into how much all this means. It’s just unfortunate it wasn’t the successful proposal scene!”

A same-sex kiss between two policemen on Britain’s The Bill made world headlines in 2002. With Neighbours sold into 60 countries, can we expect similar noise around Ramsay Street this month? According to Matt, the interest has already begun.

“There’s a lot of trust between us. We don’t have to ask permission… We’ve been butt-naked together!”

“We’ve already had a lot of noise,” laughs Matt, “so much noise, in fact, and I’m hoping we can get as much as possible. There was a lot of press on the actual day of filming the wedding, and we got Magda Szubanski to play the celebrant. That was her Neighbours debut, and she’s such an important person to have involved. Having a résumé like hers, you’d expect a bit of ego but she just didn’t have an ego at all, and was so humble. I love her.

“She said that when she was my age, when there was a gay kiss on television, it was quite risky because you didn’t know what kind of reception it would get. But to her, a gay wedding, especially on an iconic show like Neighbours… well, she could not have imagined it happening. It seemed impossible. So for us to have come this far, it’s a huge deal and especially for Australia’s longest running soap.”

Takaya agrees and is quick to point out the importance of highlighting LGBTIQ issues around the world using the medium of television. “Representation matters,” he says. “When that happens on a show that’s iconic and considered a pillar of Australian culture, the importance, as Magda explained to us, is how these moments can save lives. It’s as simple as that. You can talk about soaps being silly and over-dramatised, but moments like these hold incredible weight and are important. In fact, it’s important that these moments are celebrated in every country. Those countries still holding back on gay marriage can see that this is a positive shift, not a negative one and that the sky is not falling in. The louder the message, the better it will be for the entire world and the equality of the planet,” says Takaya.

Both Matt and Takaya are straight. Do fans assume they are gay in real life?

“Yep!” says Matt. “And when I tell them I’m not they still don’t believe me, but I think that’s good because it means we’re doing the job right. Sometimes even my girlfriend, Jess, will be talking to her little cousins and, you have to remember that TV can seem real to some people, and they’ll say to her, “Isn’t your boyfriend gay?”

She says, “Well, sometimes even I don’t know!”

“My girlfriend doesn’t mind the intimacy stuff,” says Takaya. “It’s only when I do the looks at Matt, the same looks that I give her, that it makes her feel uncomfortable because it feels real.”

Creating a character for an audience is one thing, but this is a unique relationship not only between the characters of Aaron and David, but also between the actors, Matt and Takaya. Have there been any barriers between the couple – or the actors?

“Not with us!” says Takaya laughing. “We’ve been really lucky that we have good chemistry and that’s not something you can manufacture, it either happens or it doesn’t. Sometimes you work with people and no matter how good an actor you are, it either clicks or it doesn’t. You can have negative chemistry that works because there’s a power in it or there can be a positive energy, which is what I think we have. There’s a lot of trust between us and we don’t have to ask permission with anything. We just go with whatever comes up because we’re comfortable, and we’ve had that trust from the start.”

“We try to have as many catch-ups and dinners as we can,” says Matt.

There’s a real-life camaraderie between the two actors. It’s little wonder that they’re comfortable enough to take on some recent cheeky storylines. Earlier this year the two were caught completely naked in front of a crowd.

“The proposal scene went to air the day before gay marriage became legal in Australia. We didn’t know that would happen at the time of filming.”

“But back when I did the scene with David’s previous lover Rafael (played by Ryan Thomas), in bed, one of us had to have our shirt on. That was the rule. But now, our rating has changed, it’s PG, the door is more open,” says Takaya. “We’ve now been butt naked together, but you want to have some idea of the context – in that particular scene there was a comedy edge and a nice pay off, which worked well.”

“Our characters get a lot raunchier than the others do,” says Matt. “It’s still an individual thing for an actor, though. Some actors can be quite conservative about it but I don’t really give a fuck. [Laughs.] Everyone’s seen a naked body before. There were so many people on set that day I was having a joke with the director, saying how all these extras kept having a cheeky peek. I didn’t really care, but it was hilarious!”

Read the full interview in DNA #224, grab your copy from the DNA Store today!