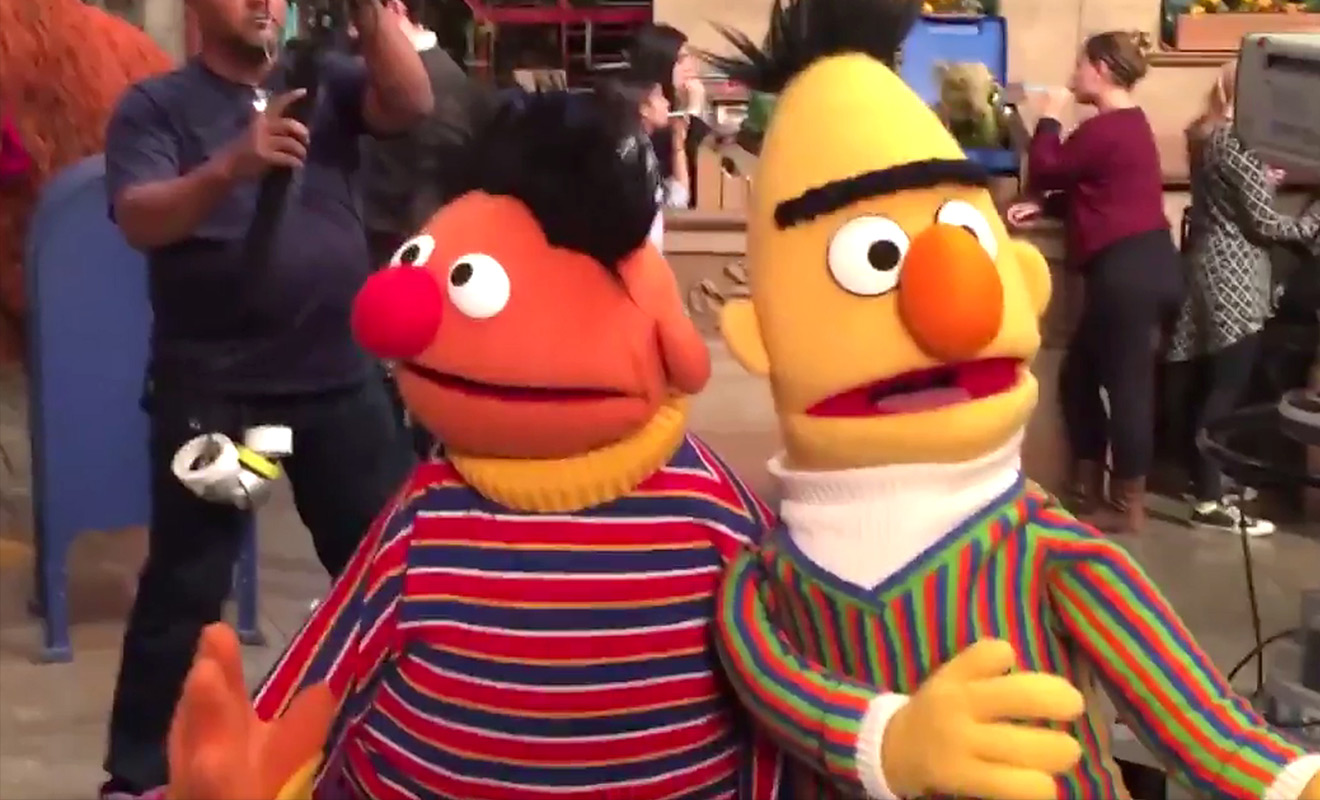 Bert and Ernie on Sesame Street

Why can’t people just let this one go?

The question that has surrounded the sexuality of the world famous puppet duo, Bert and Ernie has made it into the media (again) ahead of the Street’s 50th Anniversary on TV.

In a recent interview with website Queerty, former Emmy Award-winning script and songwriter for Sesame Street, Mark Saltzman has revealed that he considers the two central characters to be a couple.

“I remember one time that a column from The San Francisco Chronicle, a preschooler in the city turned to mom and asked, “are Bert & Ernie lovers?” And that, coming from a preschooler was fun.” Saltzman said. “That got passed around, and everyone had their chuckle and went back to it. And I always felt that without a huge agenda, when I was writing Bert & Ernie, they were. I didn’t have any other way to contextualize them.”

The Original Bert performer, Frank Oz has shared his thoughts on Saltzman’s opinion via Twitter.

It seems Mr. Mark Saltzman was asked if Bert & Ernie are gay. It’s fine that he feels they are. They’re not, of course. But why that question? Does it really matter? Why the need to define people as only gay? There’s much more to a human being than just straightness or gayness.

The creative team behind Sesame Street have publically respodnded to the claim that Bert and Ernie are gay many times over the years..

“Bert and Ernie, who’ve been on Sesame Street for 25 years, do not portray a gay couple, and there are no plans for them to do so in the future. They are puppets, not humans. Like all the Muppets created for Sesame Street, they were designed to help educate preschoolers. Bert and Ernie are characters who help demonstrate to children that despite their differences, they can be good friends.” — Sesame Workshop’s consumer response prepared statement, 1993.

“There is nothing going on with Bert and Ernie, but there’s this whole culture out there that thinks they are gay. It’s clearly something that adults are projecting onto these characters. What they are is friends. In fact, if you think about the fact they are Muppets, they don’t even have an existence below the waist.” — VP of Education and Research for the Children’s Television Workshop, Rosemarie Truglio, 1998

“They are not gay, they are not straight, they are puppets,” said Sesame Workshop President and CEO Gary Knell. in Sesame Street: A Celebration – 40 Years of Life on the Street (2009), page 47.

“Bert and Ernie are best friends. They were created to teach preschoolers that people can be good friends with those who are very different from themselves. Even though they are identified as male characters and possess many human traits and characteristics… they remain puppets, and do not have a sexual orientation.” — Sesame Workshop statement, August 11, 2011 (issued in response to a Change.org petition to have Bert and Ernie marry which circulated shortly after gay marriage was legalised in the state of New York).