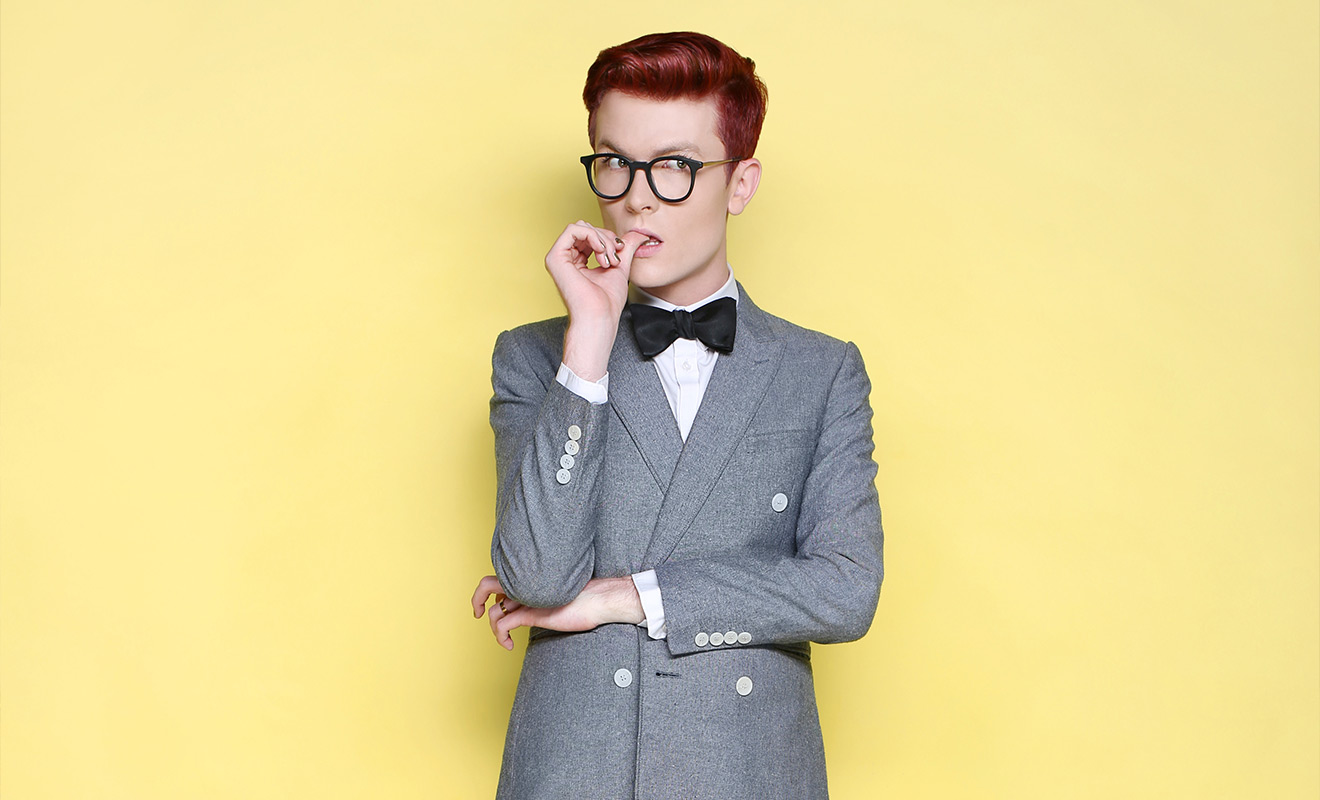 “I try not to be filthy these days,” says Rhys Nicholson, setting out on a national tour called Seminal. Australia’s most glamorous comedian tells Andrew Creagh about his fiancé (“he’s a dick”), being bullied (“I was annoying”) and his legs (“if you can see them, we’re about to have sex.”)

Let’s start with your gay wedding. In 2016, you “married” lesbian comedian Zoë Coombs Marr on stage to raise awareness of the marriage equality debate. Was the ceremony really disrupted by protesters?

It was absolutely staged. There were quite a few online douchebags about it [the wedding] but the people on stage where pretending to be bigots. It was Anne Edmonds and a few others.

Will you marry your real partner, Kyran Wheatley?

I proposed a couple of years ago, but I was drunk when I did it. We’d been to a friend’s wedding and it was lovely. I was quite drunk, he was completely sober and trying to go to sleep because he had to do breakfast radio the next day. I didn’t have a ring or anything – it was very much my style. But a few months ago, he proposed back to me, properly, on top of a hill in Edinburgh, with a ring that our friend, a jeweller, had made. Because he’s competitive. What a dick.

What is Kyran like? You’ve been together for over six years, correct?

Seven-ish years now. He’s great. He’s a broadcaster, writer and sometimes comedian. We got together when I first started doing comedy properly as a job. We work together on a lot of stuff and he directs my shows. It’s a pretty good system really.

Do you ever censor material that might involve him?

No. I run things by him, but I never censor. It helps that he’s in the business. I get more worried telling stories about the extended family. If I want to tell a story and his mum is involved I don’t want her to feel as though I’m being mean.

Do you recall the first time you took to the stage as a comedian?

Yeah. I was 16, and still at school. It was at the Sandringham Hotel in Newtown. I somehow convinced my dad to drive me down from Newcastle and to sneak me into a bar – I was underage – to try stand-up. It went okay. Not great.

“Everybody in the audience at a comedy show, more than likely, has had uncomfortable sex and is nervous to talk about it.”

So, your dad watched your first stand-up gig?

He must have! Yeah, now that I think about it, and my uncle was there, too. Dad used to drive me around to gigs when I was 17 and still living at home. This was on school nights, and quite often he’d just sit in the car and drive me home afterwards. When I was still in high school I’d get on the train after school and go down to Sydney and do these five-minute comedy spots – and bomb every time. I was a very bad comedian for a long time. And I’d get back home at midnight. God knows what my parents thought I was doing. They were very understanding. They’re great.

Was that early material about being gay?

Oh, yeah, I really lent into it. When I was 19 I did Raw Comedy, back in 2009, and it’s so cringingly awful to look at now… I didn’t know what I was doing. I was really aggressive, I didn’t know how jokes worked yet. Now I know when to pull back and when to be full-on, but back then I just wanted to be full-on all the time. It was pretty grim.

You seem very confident and relaxed on stage these days. How did you feel back then?

I’ve definitely gotten more relaxed but I still get a bit manic before I go on.

You’ve made lots of jokes about when you took pills – is that a thing of the past?

Yes. Thank God. As a teenager in Newcastle there wasn’t loads to do other than going into a field and taking pills. The last time I took a pill was probably two years ago and I remember thinking, “Oh, I don’t need this anymore.” I don’t enjoy being out of control. I used to have to be drunk to go on stage. Now I can’t think of anything worse. Some comedians smoke a joint before they go on. No thank you!

What was your material about back then?

Pretty awful really. About four years ago I threw out my old act because I didn’t agree with it. I fell into the trap that a lot of young gay comics do – they do what they think the audience thinks a gay man is. It was just gross and veering on misogyny.

What are your favourite comedy subjects now?

I don’t know… Myself. I’m obsessed with social politics. I guess most of my act is about my relationship, times I’ve embarrassed myself, stupid things people have said to me…

What about sex? That seems to come up a bit.

Yes, but as part of social politics. My whole act, any joke that I write, is about people and social interaction. I love to zero in on the stupid things people do. Or the stupid things I’ve done. Sex is one of those things. There’s so much politics in sex and it’s so relatable. Everybody in the audience at a comedy show, more than likely, has had uncomfortable sex and is nervous to talk about it. I try, these days, not to be outwardly filthy. If you’re uncomfortable at one of my shows it’s because of an image your brain has created.

Exactly. At the moment, I’m doing a joke about dicks and about how mine looks home schooled. I don’t know what that means, but it’s funny and the audience laugh and every single person is imagining a different thing.

“It would ruin his career for people to find out but Joel Creasey is actually the nicest person in show business.”

Did anyone in particular give you a big break?

No, just a lot of people were supportive. Josh Thomas was really nice to me early on, just hanging out with me. When I was really new and really not good at comedy we’d go out to drinks and stuff. He had no ulterior motive – just being nice. Tom Ballard, Wil Anderson, Lawrence Mooney and Fiona O’Laughlin were great. Hannah Gadsby was always nice and remains so. Hannah, and people like Zoë, who are kind of radical queers in a lot of ways, could see, even when I was doing horrible, shitty material, that I wanted to do something different. People were nice to me. Which is not rare, but not everyone gets that.

Joel Creasey says you’re a bit of a homebody and he likes to drag you out for a big night whenever he can. True or false?

Absolutely true. He’s my best friend and a bad – good – influence on me. I love cooking and being at home when I’m not touring but Joel is very good at making me have fun and get out.

The thing is, Joel Creasey is, secretly, the kindest, most generous person in the business. Over the years he has always looked after me and everyone around him. Joel and I started around the same time. We pretended to be competitors, and became very close friends. He’s very famous now but he continues to be very supportive of people. He’s the first person to buy a round of drinks or pay for dinner. He’ll invite you to a party if he thinks people need to meet you. He’ll have unknown comedians open for him if he thinks they should be better known. It would ruin his career for people to find out that he’s actually the nicest person in show business.

You grew up in Newcastle – was that tough for a kid who was probably assumed to be gay by most people?

My family were incredibly supportive and I went to a performing arts school so it wasn’t tooooo bad. I was pretty badly bullied but that wasn’t necessarily because I was gay.

Why was that then?

I was annoying. At performing arts high school I was surrounded by gay boys, much to my disappointment. I wasn’t the class clown but I wanted to be. I wanted to be the centre of attention all the time.

The DNA shoot – did you enjoy it?

There were some strange moments – like the rubbish bin shot. I thought it would be funny if I sat in it with my long legs sticking out. I sat in it and we were all saying, “Oh this is funny.” And then Christian said, “Let’s move on to the next shot,” and I tried to lift myself out and… yes, I was stuck in the bin. My publicist, Hannah, and Christian had to lower me onto the ground and pull it off the back of me. It made me realise that with a magazine shoot like Vanity Fair, for every glamorous picture, there’s a picture of them, at some point that day, looking like an absolute idiot. Show biz…

What about the body painting?

Weird but fun. I don’t take my clothes off very often. If you’re seeing my legs, you’re about to have sex with me.

Well… we feel very honoured to see your legs.

It was fun. It took me out of my comfort zone.

MORE: Seminal tours Australia between March and May. Go to Ticketek or your state capital Comedy Festival website for bookings.