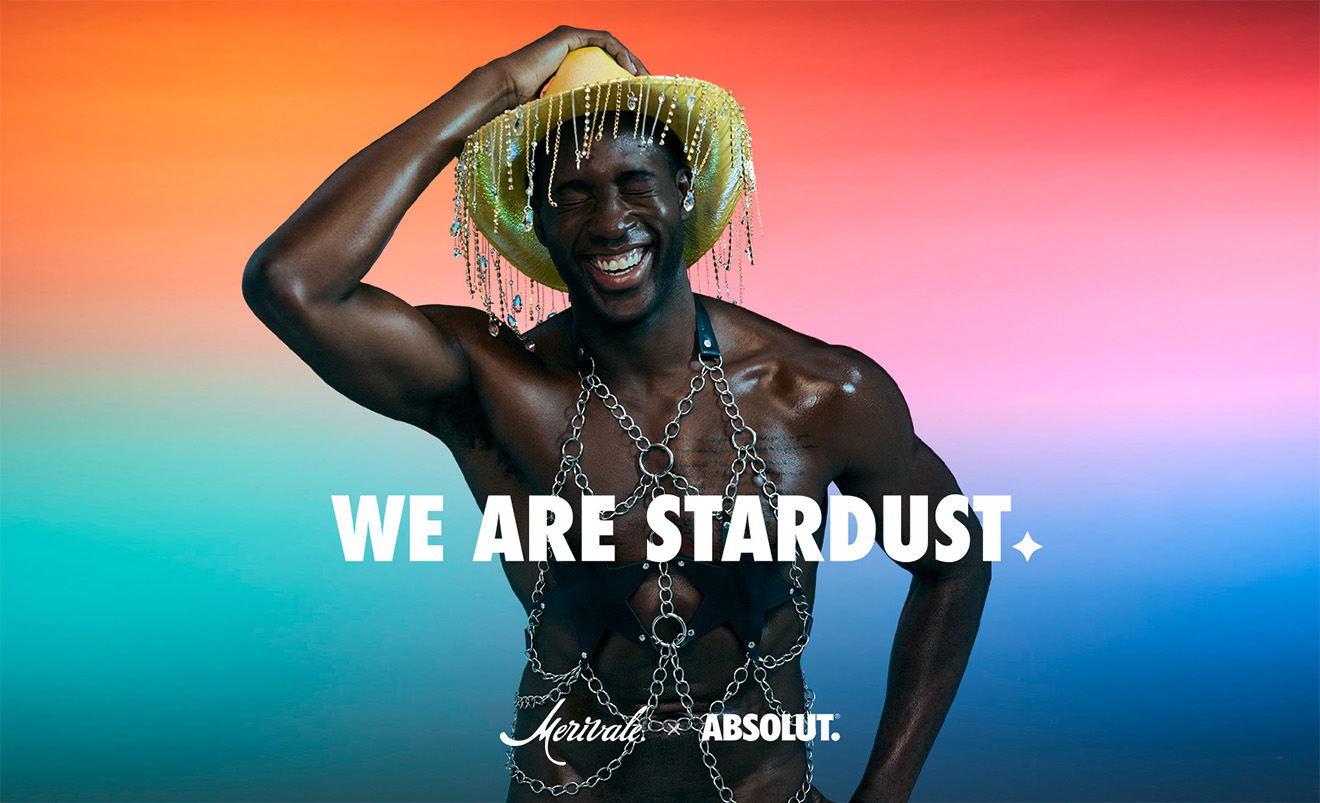 Merivale and Absolut Vodka have teamed up to launch We Are Stardust a campaign that celebrates some of the stars in Merivale’s LGBTQIA+ community who embrace individuality, see beauty in our differences and believe in love and stardust.

The campaign will be brought to life through a series of events, offers and experiences across the group, and culminate at this year’s Sydney Gay and Lesbian Mardi Gas.

We Are Stardust profiles talented people in the Merivale community, beautifully captured in a collection of vibrant photographs by renowned fashion photographer, Georges Antoni. Each photograph brings to life their individual personalities, reflecting how the universe is made up of tiny atoms of ‘stardust’ – all equal, magical and unique in their own right.

Stars include Decoda Secret – resident drag queen for The Beresford and Absolut; Sveta – world-class DJ at The Beresford and POOF DOOF and recipient of the Mardi Gras Lifetime Achievement Award for her services to the community; Jonny from the Dollar Bin Darlings, who gets the party started at ivy’s Disco Espresso every Friday, and Dai – the Venue Liaison and Community Partnerships Officer at Merivale’s charity partner, ACON.

Paul Flynn, General Manager and Licensee of The Beresford, said: “Merivale is passionate about inspiring people to be the best version of themselves. Everyone is a star in their own right, and what matters most is how you better yourself, the people you love, and the world around you. We encourage inclusivity for all and are proud to continue to support Sydney’s LGBTQIA+ community.”

In the lead-up to the 2020 Sydney Gay and Lesbian Mardi Gras, Merivale will celebrate We Are Stardust with a spectacular programme of events and experiences at The Beresford and ivy including cabaret movie nights and Bingay (a much more flamboyant take on bingo) in The Beresford courtyard, a Mardi Gras edition of their famed Dog Show, a fabulous We Are Stardust takeover of POOF DOOF, the ‘Big Gay Pool Party’ at ivy’s rooftop mecca, Pool Club, and the ever-popular and almost sold-out Laneway Party.

Beresford Sundays and Absolut are turning it up this Fair Day, with a night of not-to-be-missed drag shows Upstairs, featuring not one, but three of Sydney’s top drag divas doing their thang – Decoda Secret, Minnie Cooper and Jacqui St Hyde.

Visit The Bero for a celebration of all things doggo. Strut your pooch for your chance to be crowned Best in Show, with special prizes from Dogue.

Better yet, profits from all food and drink purchased between 11am and 3pm will be donated to WIRES Wildlife Rescue. Woof!

Equality Australia presents a talk about “Freedom of Discrimination”. This important panel discussion covers issues such as the bill that has been drafted threatening the community’s access to healthcare, along with workplace inclusivity issues, and much more.

This is a free event.

Much-loved Aussie fashion label, TEAMM8 is taking over The Beresford to show off the latest styles to get guests ready for Mardi Gras, alongside giveaways and drag shows.

Sunset Sydneysiders can head to The Beresford for open-air entertainment in the leafy courtyard.

Minnie Cooper is ready to bring it, with an all new cabaret and drag show, It’s Not Just for Gays Anymore. This two and a half hour spectacular is set to be all things fabulous upstairs at The Beresford. Book to avoid disappointment: 02 9114 7328.

Bingo? Hell no. Say hello to Bingay – a night of fabulous tunes and crazy-ass rules, with hilariously camp prizes to boot.

The annual Mardi Gras Passport Party will welcome international guests with open arms and show them how we party down under, with a great line-up of DJs and a special performance by drag queen hostess, Decoda Secret. Free entry.

Beresford Sundays, Absolut and DJ Dan Murphy are bringing a super-sized CAMP Party to The Beresford for one night only. Get in and get down to all your favourite camp anthems, from the ’90s onwards. Think Kylie, Tina Arena, The Spice Girls, Mariah Carey, Shania Twain and more. Big production, big energy, drag shows and camp AF DJs guaranteed.

Tickets on sale now: $10 presale from this link.

Revellers can don their wildest attire and join the party at The Beresford for Gay Christmas, where they can watch the parade from the comfort of the leafy courtyard, sip on Absolut cocktails, and dance the night away with friends old and new.

Laneway is the traditional closing event of Mardi Gras each year and the ultimate recovery party for 2020. Taking over The Beresford and Hill St laneway, guests can farewell summer with entertainment from day to night including the best local DJs and pop-up performers. Tickets are selling fast, so get in quick to secure a ticket before the event sells out.

A very special We Are Stardust inspired POOF DOOF – sponsored by Absolut, headlined by Wollongong legends Unknown Associates. and supported by James Alexandr and POOF DOOF queens, Sveta and Estee Louder. Guests can also look forward to a pop-up on the sky stage from Twiggy Styx!

Rocket no.9 takes off for planet POOF DOOF ahead of POOF DOOF’s epic annual entrance in the Sydney Gay and Lesbian Mardi Gras. Partygoers can travel in light years on a dance floor adventure to an Intergaylactic Paradise.

Time to break out the budgie smugglers as POOF DOOF takes over ivy Pool Sydney for the first time ever. Mardi Gras and Sydney house legends DJ Sveta and DJ Kate Monroe set to cause a mad racket of fun by the pool, while Changeroom will be transformed into *cubicle 6*, a dark and dirty techno oasis featuring Australia’s very best techno tastemakers, including tinah, powerhouse Troy Beman, as well as lovely laydehs Estée Louder and Willo Willo.

POOF DOOF going Intergaylactic at this year’s Sydney Gay and Lesbian Mardi Gras parade and they’re hosting a POOF DOOF puts on a doof to end all doofs on the biggest queer night of the year.

Further details are available at merivale.com/mardi-gras/.