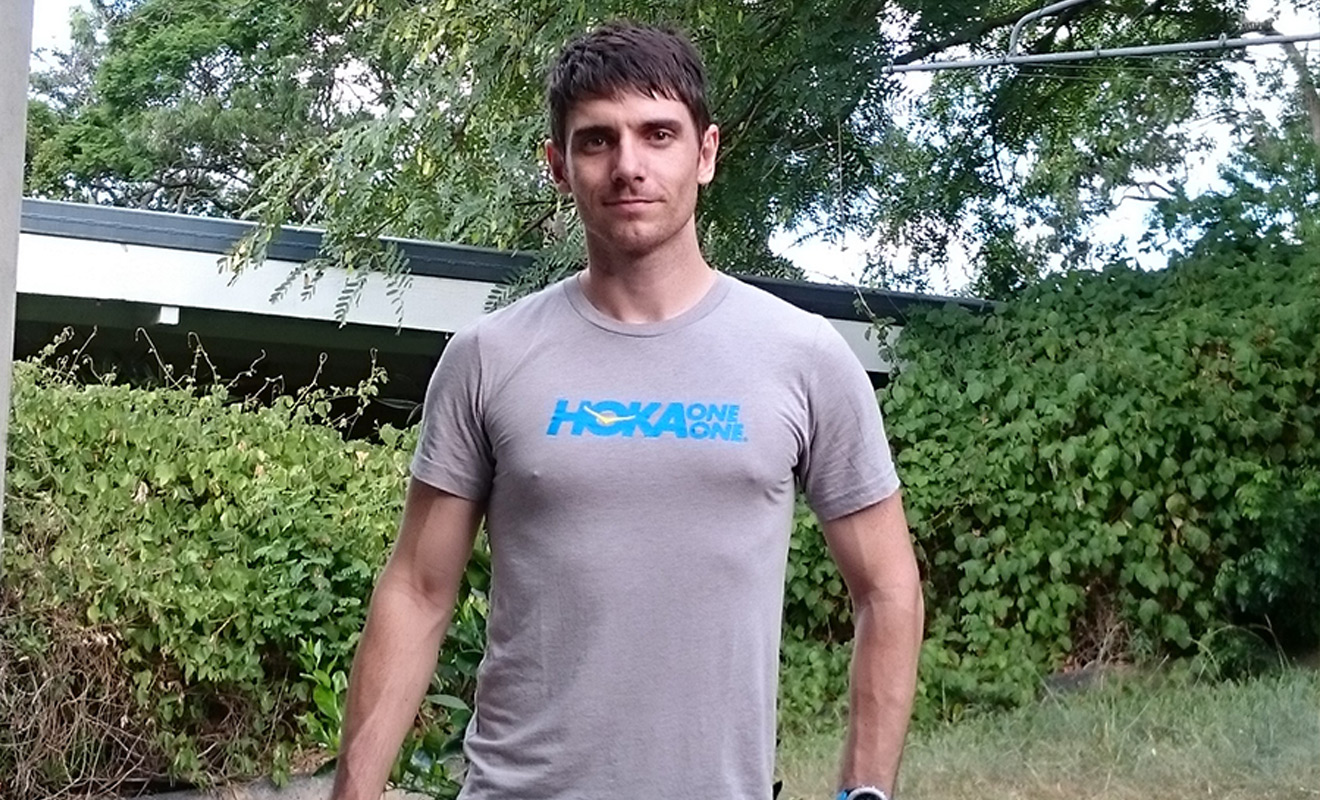 Surely a man who runs thousands of kilometres, swims underwater and occasionally flys is a superhero. That’s 29-year-old Ultramarathon runner Andrew Hedgman. He tells Andrew M Potts what it’s like to be openly gay and vegan in one of the world’s toughest sports.

This article first appeared in DNA #207

DNA: What is the technical definition of an Ultramarathon and what sets it apart from other kinds of foot racing?
Andrew Hedgman: An Ultramarathon is any race that is longer than a marathon, which is 42.2 kilometres. Races usually fall between 50 and 160 kilometres. There are a lot of multi-stage Ultramarathons that span over the course of a few days with different distances each day, the shortest day could be 10 kilometres and the longest day 100 kilometres.

In your experience, what sort of people are attracted to Ultramarathon running?
Most of the people I’ve met during races are only there to complete the race, no matter how long it takes them. It’s almost always a personal challenge to see how far they can push their body and mind and to achieve something that not many people ever contemplate.

What got you into Ultramarathon running in the first place?
I was gaining weight and was unfit in my early twenties. When I was in high school I was running half-marathons and even completed a full marathon. I hated myself for throwing all that away and barely being able to run a single kilometre. So I decided to get back into running to regain my fitness, found out about Ultramarathon running, and entered my first race. I trained for seven months and completed my first ever 100 kilometre road race. After that I was hooked!

What have been some of the highlights of your racing career so far?
Running the length of New Zealand in 2010 was one of the toughest things I’ve ever done. It’s 2,200 kilometres and took me 28 days to complete. I was still pretty new to that kind of running so I was still quite inexperienced. I’m still amazed that I did that!Running from Brisbane to Sydney in 2012 was a great 1,000 kilometre, 15-day run. I raised money for animal welfare and finished on my 25th birthday at the Sydney Opera House.

The Lycian Way Ultramarathon in Turkey and the Kalahari Augrabies Extreme Marathon in South Africa were both seven-day races and self-sufficient meaning the runners had to carry all of our gear and food during the race for the entire week! Both courses were crazy and I had many issues during both. But I made the top ten in both races and met some life-long friends through both events.

At what age did you realise you were attracted to other guys and what was your coming out process like?
I always knew I was attracted to guys but it was tough to get used to because of the community I grew up in; a small rural town in New Zealand. It wasn’t until I moved out of my town and did some travelling that I started to accept it myself and not until I moved to Australia at 21 that I finally accepted who I was. I only needed to tell a couple of very close friends. Everyone else usually just figures it out as they get to know me.

Get out of your comfort zone and take a risk. Think of something that you never thought you would ever do and aim for it.

Do you think being openly gay has ever been a barrier to getting sponsors for you?
It’s never come up with them. I have a good relationship with my sponsors. It’s always been very casual and friendly. Buff headwear has been with me from the very start and Hoka OneOne shoes came on board when I did my Brisbane to Sydney run, so did Zensah who do compression clothing. Just recently I joined up with FE Sports who provide me with great things like Skratch Labs sports drink.

How gay-friendly is Ultramarathon running as a sport and has your sexuality ever come up as an issue?
Ultramarathon running attracts a very diverse community, so it’s very rare that I meet a runner that isn’t friendly. The only time it really comes up is if my boyfriend Neil is crewing for me and another runner asks about him – then I let them know. The reaction has only ever been positive! I’m certain that if something negative was said the other runners and crew would not have any of that.

How disciplined do you need to be with your diet and training in preparing for a race and do you need much of a support team?
I really only have to be careful with my diet when I’m not training. When I’m in training I have to consume many calories as I burn so many during the week, so I need to break the habit when I take a break. I eat a vegan diet so a lot of tofu and protein shakes.
It isn’t until I get to the peak of training when it starts getting really tough. Trying to run 30 to 40 kilometres before or after work can get very tiring fast so I have to plan things well.

I can do an Ultramarathon without a crew as they usually have aid stations dotted along the course of the race. Having a support crew does help a lot though, and if I’m able to I will definitely choose to have one. One or two people are all that’s really needed on a support crew.

What does your partner think of your involvement in Ultramarathon racing?
Neil loves that I do it and has supported me a lot in races and was my support crew for my Brisbane to Sydney run – he drove and stopped every 10 kilometres all the way to Sydney over 15 days!

How did you guys meet?
We met at a club in Brisbane one night in 2010. He’d come from a dress-up party and was dressed as Ash from Pokemon. We got on really well and have been together ever since. He always knows how to make me laugh! He is a freelance artist and has worked in the animation industry. He’s extremely talented and always busy with new projects.

What’s the next Ultramarathon that you plan to conquer?
There are so many I would love to do around the world. My next one is the Ultra Trail Australia, a 100 kilometre race in the Blue Mountains. I did that last year and almost didn’t finish. I have already booked in a race early next year in Fiji – The Lost Island Ultra, a 220 kilometre, five stage race. I’d love to race in the jungle in South America. There are a couple of races in Antarctica, and some brutal races in the United States. Hopefully I can get through some of those!

You’re also a licenced scuba diver and skydiver – you must love extremes!
I skydived and scubadived quite a bit before starting Ultramarathon running. Once I got right into the sport, everything else went on hold as I was financing everything myself and it was all getting a bit crazy. I always loved being under the canopy with skydiving and so I will be getting my paragliding licence in the next few weeks to get my feet back in the air. I want to start up my own adventure blog and incorporate both my running and paragliding into it. It would be great to bring a camera and record both to get the two different views of the scenery that I get to experience.

Is there any message that you’d like to pass on to our readers?
One thing I like to encourage others to do is to try and get out of your comfort zone and take a risk. Think of something that you never thought you would ever do and aim for it. Whether you succeed or not doesn’t matter; you will have lived and learned from the journey. Only a handful of people had run the length of New Zealand before me so I was inexperienced and had everything thrown at me along the way. If I had listened to the people who told me I was being unrealistic I may have never continued on my Ultramarathon journey.