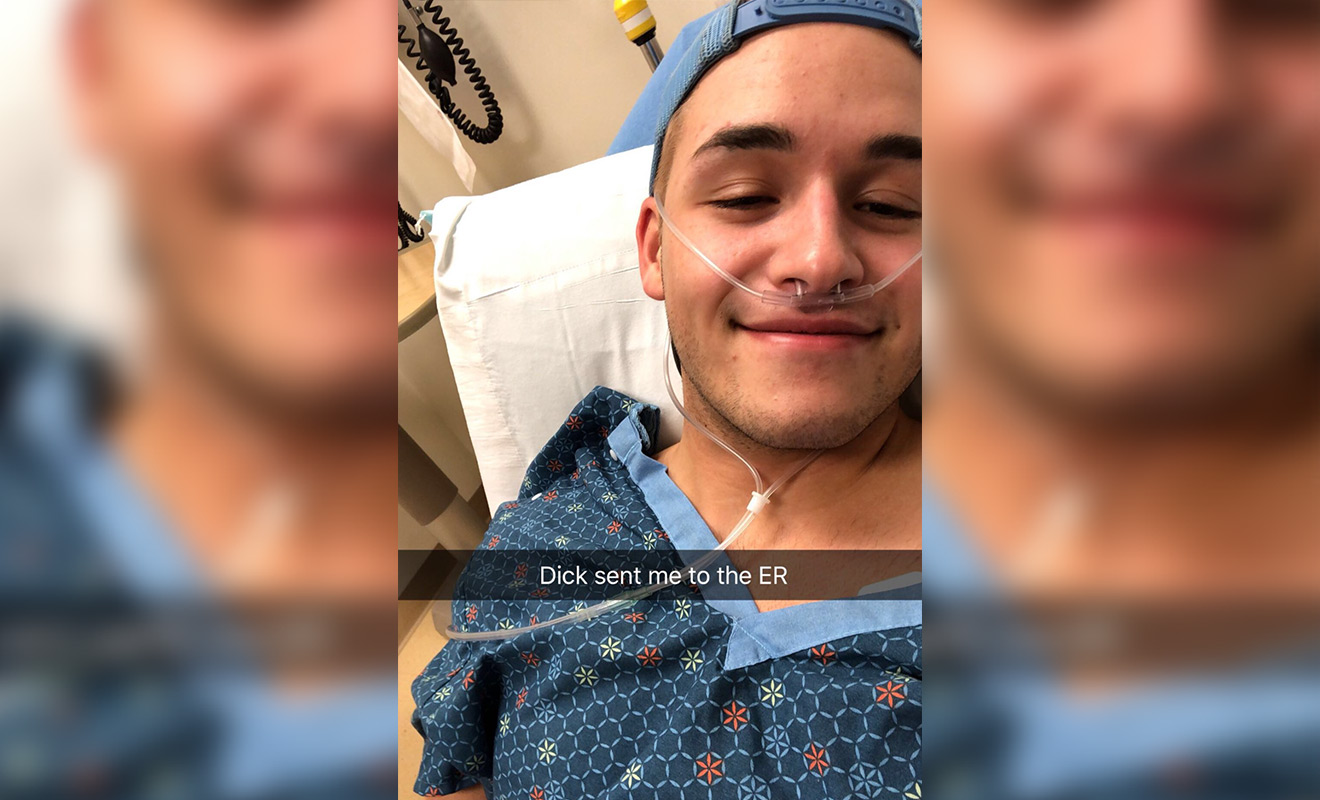 This is one dude dedicated to the cause, 19-year-old Fredy Alanis from Chicago has been hailed a hero on Twitter after he shared the details of how he ended up in the Emergency Room after he “sucked a hulk-sized dick”.

Website Them spoke with the teen who said his airway was ruptured in January during a Grindr hookup, at the time he snapped a selfie from the hospital bed and only recently shared the pic to Twitter.

‘Excuse the bad angle but remember when I sucked a hulk sized dick and ended up in the ER afterwards LMFAO never forget,’ the Tweet read.

Excuse the bad angle but remember when I sucked a hulk sized dick and ended up in the ER afterwards LMFAO never forget pic.twitter.com/dvaEITTcVs

“After everything had happened, I felt it was just this soreness in my chest. Nothing really hurt that bad,” he said.

“I thought, maybe my chest is just sore from what took place, and I didn’t think anything of it. I woke up the next morning, and the pain was still in my chest and it was sharp. I was hunched over and crying.”

Alanis explained that his mum drove him to the hospital. However, despite his parents know he is gay, he came up with a fake story about how he got the injury.

“I didn’t tell my family about this situation because I didn’t want them to think I was a whore,” Alanis said on Twitter.

Eventually, he told doctors the truth:

“The chances of it happening, and the fact that it happened is insane because the doctor told me getting the airway ruptured through oral intercourse is one in millions, maybe hundred millions,” he said.

Alanis spent three days in the hospital with a ruptured airway.

Would he do it again?

“I would do it over again if the situation was the present,” Alanis said in the interview.

Did he tell the hook-up? Sure did, and they plan on ‘hooking-up’ again:

“I saw him two weeks ago, I’m not even going to lie. I told him what happened and since then when we decide to hook up or whatever he is a lot less rough. He’s more cautious and aware of what he’s doing.”

As for his followers on Twitter, their responses are priceless!

She’s got beauty, she’s got grace, she’s got a ruptured airway. https://t.co/o2FQaSBtCf

We have found our leader! 🏳️‍🌈 https://t.co/lEmiHd0mVw

A moment of silence for our heroes https://t.co/YbU29HlXvd

We have found our ruler https://t.co/K6rLJe4XNP

This man is my hero https://t.co/aZo0zoJxNI

I love a bitch who’d die for the cause. The commitment and the dedication. We stan. https://t.co/DqRPN2jWtv

Braver than our marines. https://t.co/ETpOiRJUW9