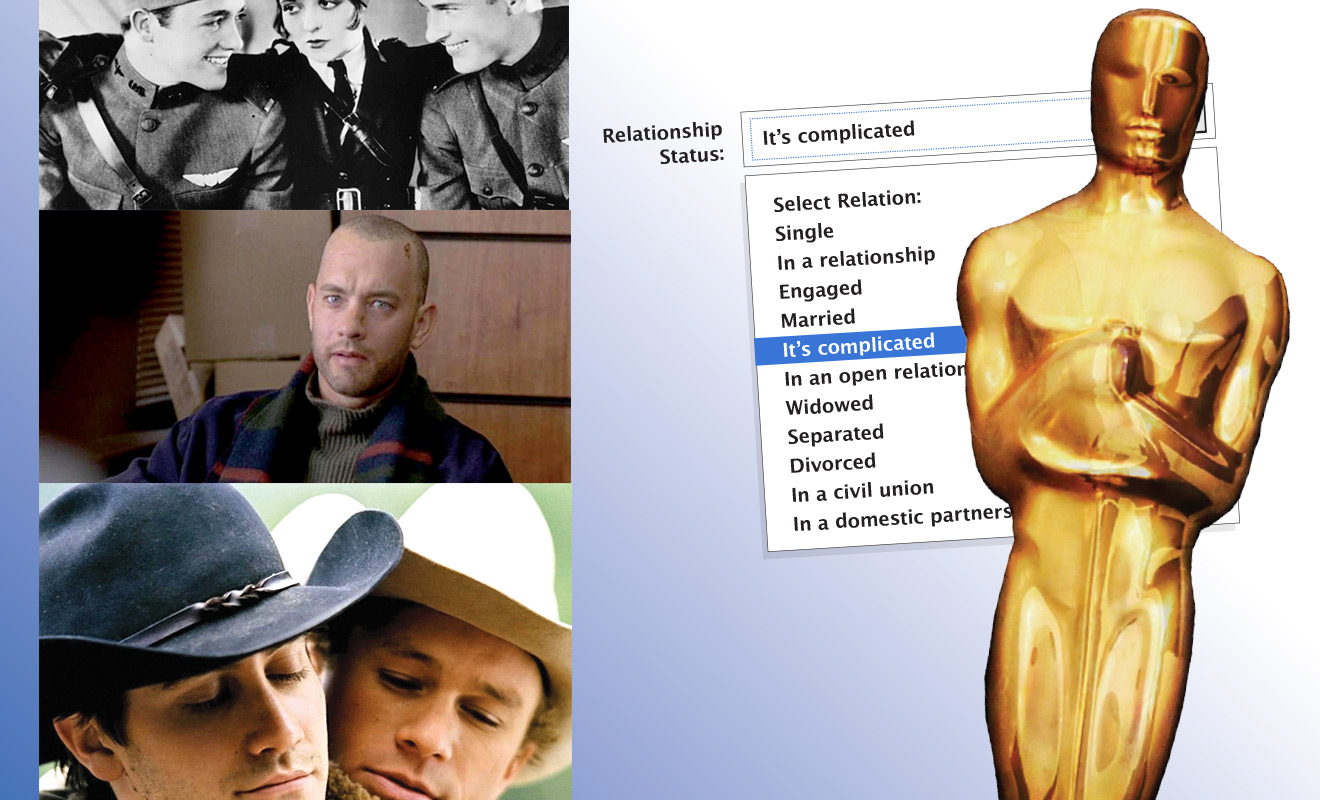 It’s a truth, universally acknowledged – or at least an accepted adage – that gay men love the Oscars; sometimes referred to as “the gay super bowl”. Last year, Moonlight became the first LGBTQI film to win Best Picture and the Oscars, but how have LGBTQI films fared in the 90-year history of these great awards?

Hollywood runs on gay fuel. From the actors and actresses, to directors, technicians, designers, hair and make-up artists, publicists and agents, virtually every aspect of the movie-making industry is influenced by gays and lesbians.

For most of its history, Hollywood has offered a safe workplace where, by and large, gays and lesbians could find a degree of freedom and acceptance they couldn’t in other industries. Yet, when it comes to representation on film and wins on the night, the Academy Awards has a complicated history with the LGBTQI community.

The first Academy Award ceremony was held in 1929 honouring the films of 1927 and 1928. The Celluloid Closet (a 1995 documentary, itself snubbed by the Oscars) explains how the swinging ’20s were a far more liberal time for gays in cinema than the 50 years that followed. Indeed, the first Best Picture winner, Wings depicted what many film historians consider Hollywood’s first gay kiss. In the film, World War I pilots Dave and Jack are bosom bodies (to use the modern vernacular, in a bromance). Near the climactic end of this silent film, Dave encounters a dying Jack and, while they share a tender final embrace, they also kiss just before he dies. You can find the clip on YouTube.

However, the liberal ’20s turned into the dark ’30s with the introduction of the infamous Hays Code. Implemented in 1930 by the Motion Picture Association of America (MPAA), it required that producers submit their films for approval before release and among its guidelines was a rule against the depictions of “deviant sexual behaviour”.

Gone was the dashing-but-androgynous Rudolph Valentino, replaced by the comically hyper-masculine Clarke Gable. The dictum against “deviant sexual behaviour” had a profound effect on how queer characters could be depicted – if at all.

Characters perceived to be gay in the Oscar-winning films of the 1930s were the source of ridicule, creating the stock “sissy” character – the un-masculine man. No more than a joke, a punch line, and obliquely gay, the sissy was designed to make men feel more masculine by occupying the space between men and women. Sang the Cowardly Lion in the Oscar-winning classic, The Wizard Of Oz: “Oh, it’s sad, believe me, missy, when your born to be a sissy, without the vim or verve.” The sissy has lasted in various forms throughout Hollywood history, all the way to the classic Disney villains of the ’90s: think Jafar, Scar and Radcliffe.

“No openly gay actor or actress has ever won a lead actor Oscar… either they were not out at the time of their win, or were only outed posthumously.”

The cinema sissies of the ’30s evolved into figures of moral panic – the tragic villains – of the ’40s through to the ’70s. These LGBTQI characters were self-loathing, duplicitous, untrustworthy, mentally unwell, cruel, sometimes evil, piteous, doomed to madness, despair and suicide. Oscar-nominated films were littered with them, including Mrs Danvers in the 1940 Best Picture winner Rebecca, Peter Lorie in the 1941 nominated The Maltese Falcon and Al Pacino’s failed bank robber in 1975’s Academy-nominated Dog Day Afternoon.

The demented gay villain persists in modern film characters such as the homophobic depiction of Prince Edward in the 1995 Best Picture winner Braveheart, the gay serial killer Buffalo Bill in the 1991 Best Picture winner The Silence Of The Lambs and even Javier Bardem’s role as Raoul Silva in Skyfall.

In the ’80s and ’90s, the tragic figure of the AIDS victim was added to this litany of woe. Gay screenwriter of the time, Arthur Laurent stated: “the fate of the gay character in literature, plays, films, is the same as the fate of all characters who are sexually free: you must pay, you must suffer. Certainly, if you’re gay you must do real penance, die.” During this phase, the Oscars rewarded Tom Hanks for playing a gay man dying of AIDS in Philadelphia in 1993, and William Hurt for his role as a doomed transgender prisoner in 1985’s The Kiss Of The Spider Woman. Since those wins, straight actors taking on the challenge of playing gay are consistently described as “brave”.

No openly gay actor or actress has ever won a lead actor Oscar. Gay, lesbian or bisexual performers including Charles Laughton, Montgomery Cliff, James Dean, Rock Hudson, Cary Grant, Marlon Brando, Laurence Olivier, Alec Guinness, John Gielgud, Kevin Spacey, Greta Garbo, Marlene Dietrich, Jodie Foster and Ellen Page, were either not out at the time of their win or were only outed posthumously.

“The use of the word ‘brave’ to describe straight actors playing gay roles illustrates that homosexuality is still problematic for Hollywood.”

It wasn’t until the late ’90s, with the emergence of New Queer Cinema, that gay characters in Hollywood, and at the Oscars, began to be depicted more humanely. In the mainstream, the new stock gay character became the gay best friend, exemplified by Rupert Everett in the 1997 romantic comedy My Best Friend’s Wedding.

Ian McKellen remains the only openly-gay man nominated for playing a gay man, in 1998’s Gods And Monsters. Also worth noting is that Vincent Minnelli, Tony Richardson and George Cukor won Best Director while still in the closet, and John Schlesinger, director of Midnight Cowboy, remains the only out director to win.

The continued use of the word “brave” to describe straight actors playing gay roles illustrates the persistent view that homosexuality is problematic for Hollywood and the Oscars. Contemporary readings of 1969’s Best Picture winner, Midnight Cowboy might position it as a queer text, but it certainly wasn’t perceived that way at the time. The loss of Brokeback Mountain to the inferior Crash in 2005 turned out to be among the biggest upsets in Oscar history and a recent example of homophobia rearing its ugly head. Until Moonlight (2016), no overtly LGBTQI film had won Best Picture.

In the wake of the #oscarssowhite moment, the Academy has made efforts to diversify its overwhelmingly white, straight, male membership. This year, following the most successful year for LGBTQI films at the Oscars, we have a new candidate for greatest gay film of all time, Call Me By Your Name. This film represents a watershed moment in the history of gay cinema, and at the Oscars. What makes this film’s nomination so meaningful is that it has no villain, no deaths, no disease, no anti-gay violence and its gay characters are not punished, Hays-style, at the film’s end.

Unlike Moonlight or Brokeback Mountain, Call Me By Your Name focuses on the blossoming love between two young men without the complication poverty or race. Further, its lack of cynicism is unique in cinema today, with so few great romances gracing our screens. The film’s two leading men (Armie Hammer and Timothée Chalamet) are straight-identified; its directed by openly gay Luca Guadagnino and written by openly gay James Ivory, adapted from Andre Acciman’s acclaimed 2007 book. Ivory is the hot favourite to win in this category.

Call Me By Your Name.

While Call Me By Your Name has been nominated in the Best Picture category, it seems unlikely the Academy’s voting members will reward a gay-themed film two years in a row. But, this year, look out for Richard Jenkins’ portrayal of a gay artist in the Best Picture frontrunner, The Shape Of Water.

Ultimately, the Oscars are a reflection of the movie-making industry. That glass ceiling of an openly gay actor winning an Oscar remains to be broken and when it is it will represent an even greater cultural shift than Moonlight’s deserved win.