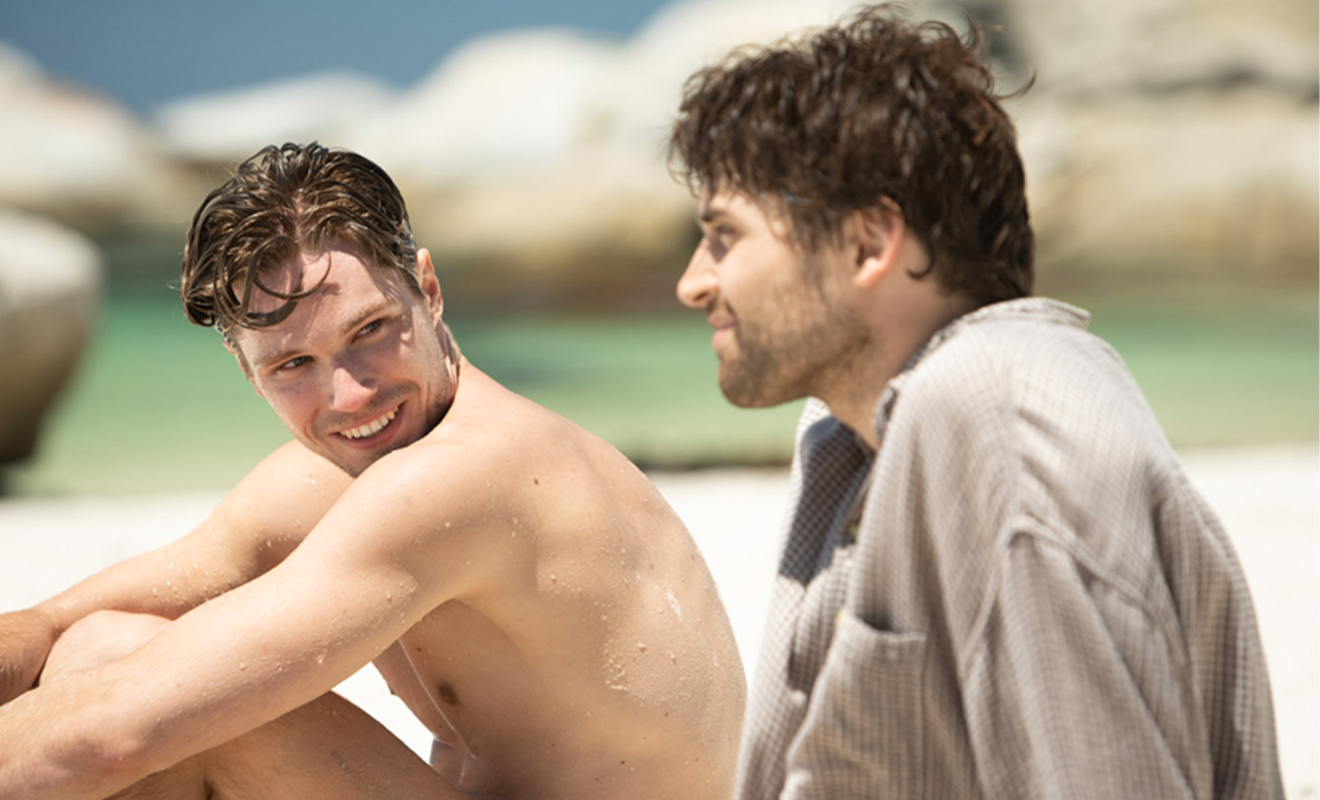 If you’re a movie-lover there’s an abundance of LGBTQIA+ films out now through festival screenings or to stream and they range from tear-jerking to side-splittingly funny – and sometimes both!

South Africa, in 1981, is threatened by two enemies: the communist hordes in neighbouring Angola gathering at the border and the queers and faggots already inside the gate, trying to turn members of your family.

Teenager Nicholas Van der Swart (Kai Luke Brummer) has been called up to do time in the army. Before his departure, his dad ceremoniously hands him a Boobs magazine in what we suspect is an ill-fated attempt at bonding.

En route to training camp, the young soldiers-to-be raucously bully each other and over-compensate for gender insecurity, and fear at what lies ahead. It gets further out of control at the camp itself where the guys are herded, dehumanised, forced to strip and generally told they’re worthless by the sergeant on the warpath: “You’re all bloody pus-filled useless scabs.”

There’s a clear link between the ugliness of their treatment and what it’s doing to their minds. With no warning, one of the guys brings a rifle to parade ground, points it up to his chin and fires.

Nicholas gets a few days’ leave, and a fellow soldier, Stassen, kisses him in a quiet moment just before he goes. It confuses Nicholas, who’s yet to come out to himself, but he remembers being caught as a little lad eyeing the big boys naked in the change-room. Upon his return from leave, he learns Stassen has vanished, “transferred due to a medical issue”.

Director Oliver Hermanus tells his story (based on a book by André Carl van der Merwe) very sparingly, cutting each scene tightly, leaving enough for us to fill in the gaps and appreciate the subtext. This is a splendid hard-hitting and unrelenting character study of a young man coming to terms with himself in a hostile environment, where the real enemy is not the communists, nor the fags. This is the era of Apartheid. The real enemy is more inside your head. The film ends, subtly, on a beautiful hopeful note. (18+, 104 mins, part subtitled)

A lovely look at ageing in the queer community which begins ploddingly and gradually weaves you into its spell until you’ve fallen in love with the lead character who, by the end titles, has become your new best friend.

Udo Kier is disarmingly brilliant, and understated, as the hair and makeup expert to the stars and sometime drag queen, Pat Pitsenbarger, now confined to a retirement village where his only friends are his memories.

Summoned to do dress the corpse of a former celebrity client, he escapes the old folks home and embarks across country to the morgue, visiting the grave of his former lover along the way to make amends.

He also drops in to his old store for makeup supplies and finds the new owner (the always delightful Jennifer Coolidge, last in The White Lotus) has made some changes.

Writer-director Todd Stephens uses a great song selection to gently underscore the action — Dusty sings Yesterday When We Were Young, Judy sings Suddenly You’re Older (from The Man Who Got Away), there’s Peter Allen’s heartbreaking Don’t Cry Out Loud.

Pat is reinvigorated with each step of his journey, restoring himself inside and out to his best Quentin Crisp.

Finally, we learn who the mysterious dead icon is that he’s dressing. She gets a flashback scene as well as laying in state. She’s now 79 and, of course, looks great. Director Stephens must have been beside himself to land her 40 years after she got her most famous role.

Today Evan Hansen is at his wits end. Not that today is any different from any other. To console himself, he writes himself a letter: “I wish I was part of something. I wish anything I said mattered to anyone…” The letter has a journey of its own and becomes mistaken, misquoted, misattributed and dear Evan Hansen is enmeshed in a huge misunderstanding – with his classmate Colton’s suicide at the centre, and Evan presumed to be Colton’s boyfriend.

On an important level, it’s a gripping musical morality tale about social media and owning yourself – the good bits and not-so-good. It’s about growing up, loving and making friends. That part works a treat.

At 22, out gay actor Ben Platt played Evan on stage in Washington to great reviews, took the role to off-Broadway, and onto Broadway where he won a Tony, the youngest ever for a musical. He made the role his own. He’s a very good actor and has a magnificent singing voice.

But now he’s 28 and, as fresh-faced as he is, there’s a knowingness in his eyes and sense of self that undermines Evan’s naivety and awkwardness; he’s just too old and mature to play a high-schooler with anxiety disorder. A theatre audience is adept and willing to suspend disbelief; it’s different when it comes to the camera’s unrelenting honesty.

Put that aside, there’s so much to appreciate, including Julieanne Moore as Evan’s single mum, Amy Adams and SVU’s Danny Pino as Colton’s grieving parents, and the other teenage roles, all very well payed.

It begs comparison with the screen version of another high-school musical, Everybody’s Talking About Jamie, whose seamless use of music makes Evan’s score seem forced. Jamie transited to the screen triumphantly, Evan not quite. But its lessons about social media, acceptance, and honesty are timely and always relevant. There’s lots to love here. (15+, 137 mins)

Amin, now 36, tells the story of how most of his family escaped Kabul, Afghanistan, two decades ago in a series of desperate attempts, some failed, some successful.

It’s told in animation which reduces the story to its most basic elements — terror, deprivation, separation, loneliness — but makes it perhaps easier to watch, not unlike a child’s storybook.

Newsreel video is dropped in occasionally, reminding us this really happened (and is happening), including live vision of a man being shot down in the street.

The many escape attempts include paying people traffickers to smuggle some of the family in shipping containers aboard huge vessels; cramming others aboard tiny rickety boats which are almost destroyed in a storm. When a massive liner draws up next to them their joy is overturned when the captain announces he’s called the Estonian police to take them back.

Amin realised he was gay at age 5, when he fell in love with Jean-Claude van Damme. There were no homosexuals in Afghanistan, that he was aware of; there wasn’t even a word for them in the language.

Finally, now a teenager, Amin makes it to the US alone. He asks for medicine to make him normal because he’s attracted to men. In this brave new world he’s told there is no cure, that he’ll learn to live with it.

Courageously, after some time, he comes out to his brother who takes him to a gay bar, saying: “Nothing to worry about. We’ve always known.”

He learns most of his family have made it out of Afghanistan, and are scattered around the world, except his dad about whom nothing is ever known.

Freedom and prison take many forms. This is a valuable and moving account of how one man fled physical, political, cultural, economic, racial and emotional jail bars, told with disarming simplicity.

The story ends with Amin, now in his 30s, marrying and moving in with his boyfriend, proving some childhood nightmares do have happy endings. (M, 90 mins, subtitled, animated)

Young Mario (Thomas Prenn), an aspiring closeted dancer, has to deal with survivor’s guilt when his friend Lenz (Noah Saavedra) is the victim of a vicious terrorist attack in a gay club in Rome. He’s had the hots for Lenz and is devastated by his death and the horror of the massacre. Mario is the sole survivor.

Mario is from the small Italian town of South Tyrol, where most everybody speaks German, and he’s out of his depth in the big city, on all levels, and finds surprising support from a Muslim community.

But he has to go through drug episodes and bouts of alcohol before he’s anywhere near reachable by his new friends, especially Nadim (Josef Mohamed).

Evi Romen is directing his first film, following a career as an editor, and he admirably takes on a script which tackles lots of issues — perhaps too many to deal with any of them in sufficient depth, at least to give any of them a sense of resolution. (Unclassified 18+, 108 mins)

Watch These Films At The Sydney Film Festival