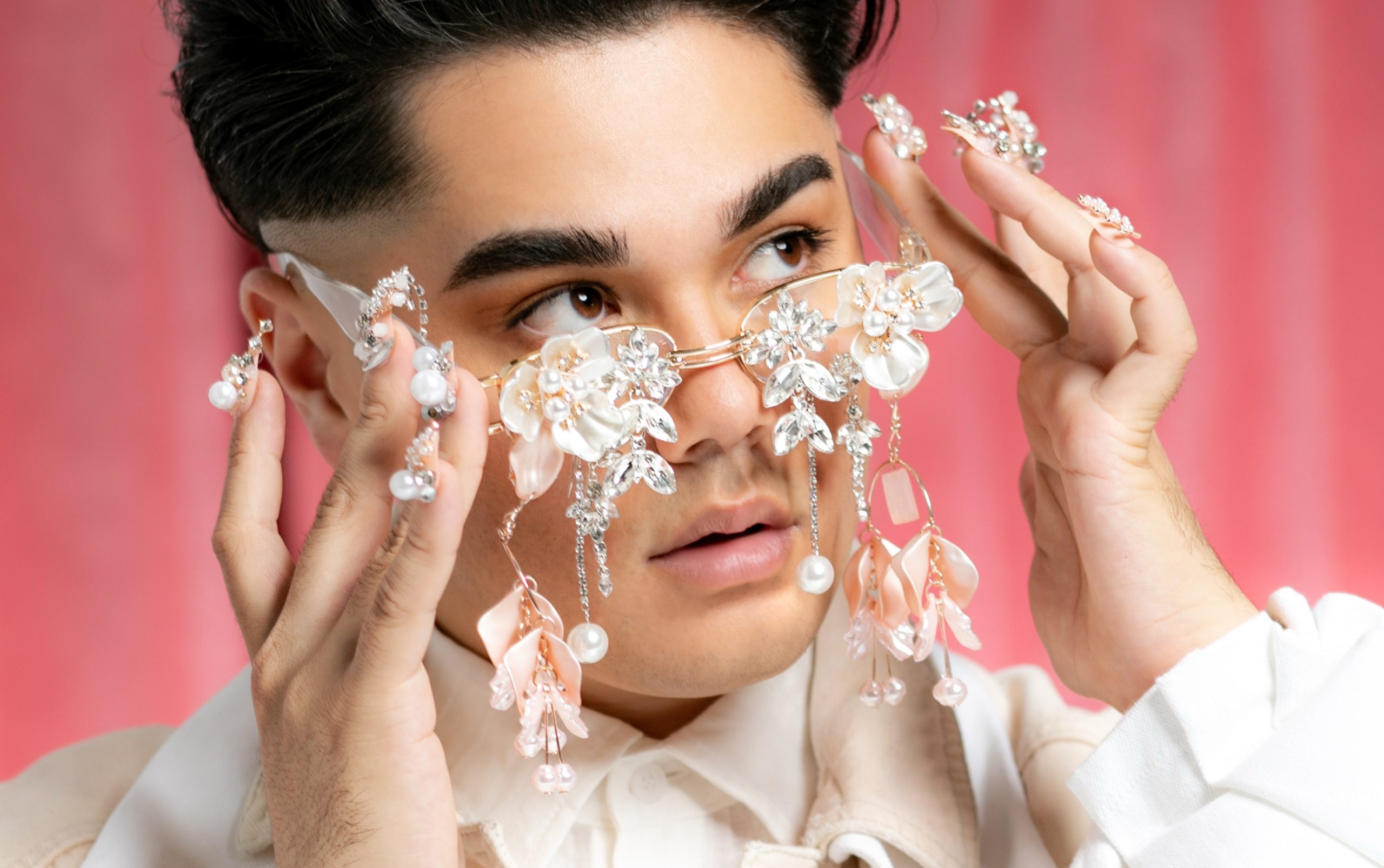 Eurovision: Australia Decides returns in 2022. It’s the nation’s chance to review and choose a song and artist to send to the bigger, more international Eurovision Song Contest set to take place this year in Turin, Italy. DNA has become accustomed to chatting with the familiar names and emerging artists ahead of the national selection, broadcast live on SBS, to see how they’re all feeling.

Today avant-garde, Aussie-Filipino and Eurovision superfan Sheldon Riley has released his haunting ballad Not The Same, a song that has been waiting in the wings for three years. But this is his Conchita moment, his big Eurovision debut, on the Australia Decides stage…

Sheldon, you’ve made no secret that you love Eurovision. Did SBS ask you to participate or were you banging down their door?

There has been a lot of social climbing, telling everyone how much I’ve wanted this for so long. I’ve spoken with the SBS team once before but the timing wasn’t right. They’ve known how long I’ve wanted to be a part of Australia Decides, and ultimately represent the country, so yeah, it happened to be this year.

What is it about Eurovision that you love so much?

It’s… everything. I can’t really think of anything I don’t love, even down to waiting for the delay when the hosts link to the country to give the votes. It is the only competition in the world where everyone’s competing but it brings everyone together. Also the only competition I believe, where people can establish a solid career off the back of it.

It’s also constantly evolving. I remember watching as a kid, it was camp, it was what everyone knows Eurovision to be, but it’s evolved to something quite cinematic and very fashion forward.

What’s your favourite fashion moment of Eurovision? Is it Conchita, where she looked like a champagne glass?

Champagne glass, ha! Conchita is an artist who completely changed my life. That might be the most obvious answer for most queer people to say, but I have to say, I really fell in love with Barbara Pravi from France. Her whole journey leading up… being invited to the Dior Heritage Archives to choose outfits and design with Dior, that’s fucking amazing. I messaged her on Instagram and when she replied, I nearly had a heart attack.

Again, this thing that was once costume driven is so fashion heavy now. It used to be something that I was, not embarrassed to say I loved, but it was cool and quirky to get up at 5am in the morning for… now everyone is so invested.

It’s fun and exciting. I saw their success coming from a mile away, they’re all so stunningly beautiful and can perform their arses off. It was exciting to watch a group of no-fucks-given people perform whatever they want… and win.

Could you see your success coming your way… when did you become aware of the power of your voice?

When I started singing, heartbreak happened, and I made a connection between my voice and the reason why I sing… and I thought, this is what I need to do for the rest of my life.

Tell us about your Australia Decides song, ‘Not the Same’?

I wrote the song myself. It’s a storytelling song. I haven’t looked into what sort of success people have had writing their own song, but I didn’t want anyone else writing it for me. It’s dark, it’s orchestral, it has this big moment. I’ve been telling people to just… be prepared. It builds… and then visually there’s this massive thing that happens, that gives an answer… and helps people understand me.

Your brand description is ‘Painful Lyrics, Heavenly Sounds, and Crystal Veils’. Does this help people understand you?

The reason I know I’m ready for Eurovision now is I am so ready to be authentic, and really be myself. There’s this culture in Eurovision ‘the glittery, the camp, rainbows’… and don’t get me wrong it is all these things, but I watch a lot of the national finals and I see these artists step in, they’re established and they have their own sound and you see them start to mould themselves into what they think exists within Eurovision. The artists that I love the most are the ones that go in and go, ‘There is no mould and I’m not changing myself, or my style to fit this song’. For me, I am someone who writes painful music, I want it to sound beautiful and I will almost always have some sort of veil over my face, and that’s the authentic version of myself that I will put forward.

I even wrote this Australia Decides song even before Eurovision. I didn’t really have to change too much, maybe because I’m already a Eurovision-head, to fit what people think Eurovision is.

Speaking of veils… in your music video for Left Broken, you’re wearing a metal mask designed by Gaga’s designer Lance Victor Moore. Tell us about that.

Yeah, he did all of her VMAs masks, and Chromatica music videos. It’s an awesome contact to have. Not many people get to say they’re wearing a mask designed by Gaga’s mask designer [laughs]!

Who’ve been your LGBTQIA+ role models or mentors?

I tell everybody that Adam Lambert’s one of my biggest inspirations. I love his music, but for me and what I do he really just paved the way for people to go ‘Ok, it will work in the industry’.

I’m inspired by runway and fashion… Alexander McQueen, Jean Paul Gaultier… the designers that create shock and ‘Wow’ moments. Music is such a big part of my life, but fashion is also equally hand-in-hand. When I’m making something to wear, the music is in mind or being written. I’m always thinking about how it’s going to look visually.

Even this Eurovision song coming, it’s inspired by Billie Eilish and the James Bond vibe of music. Even Barbara is a massive influence for this song. All of this tied together, I’m even thinking of the Marc Jacobs 2016 Fashion Runway and how that would tie in with the music and how it would visually make sense because I want to tell a story, but not too easy to understand.

I read somewhere that you want to be the Aussie singer that goes to the Met Gala.

The Met Gala is my big fashion dream, and Eurovision is my big music dream.

What does it mean to have queer representation in 2022?

I don’t want to sit here and preach the rainbow flag, but you’ve got people everywhere in the world who are, even a tiny bit afraid of who they were born to be. Before I decided that I was safe and comfortable enough doing what I do every day–I mean, I dress up every day–I was unable to achieve anything.

For me, queer representation in music, media, sport, anything is important. The more voices out there… on TikTok… and Måneskin… their comfortability of just being human has inspired a generation of people that could’ve easily been influenced in other directions.

What about your coming out experience…

It was hard, it was rough. I come from a religious family. I come from a family where I felt very uncomfortable watching Conchita on TV, and I remember watching that clear as day, wanting to tell everyone about it.

My mum and dad were really good. It took a while, but I also came out really early, and decided to go on X Factor, I said ‘I’m gay!’, and they couldn’t really say anything about it because it was on TV [laughs], so they all had to be supportive. I’m glad I came out early. I’m 22 now, and that feels like decades ago…

And now, romance! There’s a red hot ginger boyfriend in your Instagram posts.

He’s beautiful. I love him to death. He actually manages me. I’ve had a few relationships, where I told myself, I don’t know if relationships were as easy in the gay world. And then I met [Zachery] at the end of The Voice in 2018 and we’ve been together ever since. I’m so deeply in love with him. I’m not someone who goes out and looks for love, this kinda happened and I’m very grateful. He’s a very beautiful looking human… and a very beautiful soul too.

I work very hard. I’ve worn a lot of designer stuff and I’ve got a lot of amazing contacts, but a lot of them I’ve met through social media. As a person who grew up through public housing, I didn’t have all that much money at all when I first started. I’d miss out of a lot of opportunity, because I couldn’t finance it. The way that I dress, the time and effort I put into it, people probably assume I’ve got a fuck ton of money, but that’s another reason I’m ready for Eurovision. I’ve got some backing now, supported, worked my arse off to get here. Eurovision’s not just something to go, ‘I’m gonna do it, so you do it’. There’s a lot of prep time.

Aside from the crystal/jewellery masks, a lot of the clothes I make myself. But I’m working with a designer for Australia Decides, I’ve got their sketch designs up, and there’ll be content posted about that. But the outfit is fucking everything!

What’s your 30-second message for the voting public?

I would be so honoured to represent the country, it would mean the absolute world to me. I feel like I bring Eurovision just by walking into the room, and I could be someone that could establish a really good name for Australia. People could go, ‘Remember 2022… when Sheldon did that really crazy thing, with that amazing song?’

I’m so inspired by what Dami’s done, Kate Miller-Heidke… and so many of the Eurovision artists, I would love to be a part of that. So if you love what I do, vote for me in February.

Not The Same is out now! Eurovision – Australia Decides 2022 airs live and exclusively on SBS and SBS On Demand on Saturday 26 February (AEST). Tickets can be purchased through Ticketek.