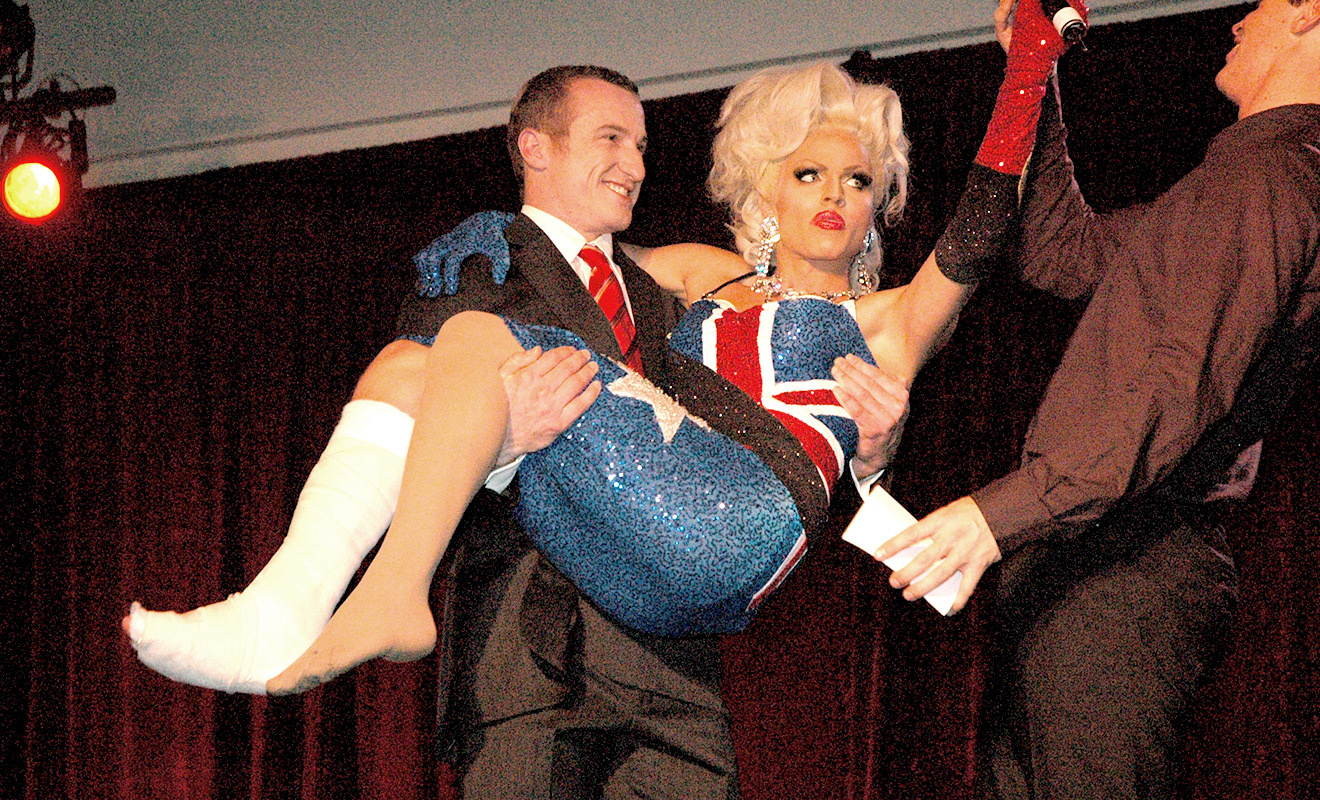 Winning Celebrity Big Brother in the UK couldn’t have happened to a nicer gender illusionist. Courtney Act has always been a superstar – even with a broken leg!

In 2009, Shane Jenek and I travelled to Whistler in Canada – me, as a journalist, to cover Winter Pride and Mr Gay World for DNA, and Shane to perform as Courtney Act at the Mr Gay World grand final. Shane and I had worked together before on events around Sydney’s gay bars. Now Courtney was quite famous, having appeared on Australian Idol and other TV shows.

Whistler was buzzing with gay men from all over the world, some skiing and partying at Winter Pride, others there to compete in the Mr Gay World finals. I managed to take one day off from covering events to go up the mountain and have an amazing day skiing myself. Fatefully, I recommended it to Shane! The following day I received a message that my friend was at the Whistler medical centre – there had been an accident.

Courtney Act performs with a broken leg at the Mr Gay World finals, 2009.

The medical centre was extremely well equipped like a fully functioning hospital ward. Propped up in the bed at the far end was Shane wearing a blue hospital gown and with his leg elevated. What happened?

Shane explained that he’d gone skiing and met some nice people on the mountain who invited him to join their group. All was going well until they chose to tackle a black run – with moguls! This was beyond Shane’s level and as he descended over the punishing bumps and lumps, oops, he heard and felt his leg break.

Now here he was, doped up to the eyeballs on hospital-strength intravenous pain killers, waiting for the ambulance to arrive from Vancouver. His tongue loosened by whatever it was they were giving him for the pain, he gossiped, told me fragments of his life story, deconstructed past relationships, and became best friends with the nursing staff and anyone else who happened to walk by during his non-stop stream-of-consciousness monologue.

Amid the babble he had the presence of mind to realise that in hospital in Vancouver he may need some fresh clothes and toiletries, so sent me on an errand to this hotel room to collect some things. Opening the door, it was clear this was a showgirl’s room! It was as though a bag of drag had exploded, scattering sequins, feathers and vertiginous heels in every direction.

I did my best to find boy clothes (most of which were tangled up with Courtney costumes) and put together a bag of men’s grooming products (which seemed to coexist in a make-up bag of foundation and lipsticks). False boobs? He won’t be needing those! Platinum blonde wig? No. Clean underpants? Yes!

“I hadn’t counted on Shane / Courtney’s tenacity. This showgirl has both glitter and grit and the show was going to go on!”

Back at the medical centre, Shane was still chatting away as lively as ever. I wondered if he’d even noticed that I’d left. The ambulance from Vancouver arrived and a sturdy, no-nonsense medic with the name tag “Moira” began the transfer process.

Moira, only mildly amused, thanked him for pronouncing it correctly and wheeled him to the ambulance. Whether Shane was coming back from Vancouver was unknown – X-rays had to be taken, the seriousness of the break had to be assessed.

Winter Pride and Mr Gay World events continued and word soon spread around the village about the Aussie drag queen who’d broken her leg. I felt terrible for the Mr Gay World producers. They’d forked out quite a bit to bring Courtney here to perform at the grand final and now their showgirl was incapacitated.

But I hadn’t counted on Shane / Courtney’s tenacity. This showgirl has both glitter and grit and the show was going to go on!

To everyone’s surprise, Courtney materialised at the Mr Gay World finals – in a wheel chair and with a leg in heavy plaster. She was carried on stage by Ben Edwards, Mr Gay Australia and, steadying herself on the microphone stand, quipped, “I’ve been asked to appear in a new Canadian reality TV show – So You Think You Can Walk.”

The music started and Courtney began singing live – a mash-up version of Kylie’s 2 Hearts and Michael Jackson’s The Way You Make Me Feel. Then, shockingly, she unhooked the microphone and began hopping around the stage. Singing live, hopping, one foot in plaster, the other in a stocking, on a stage strewn with slippery confetti foil. It seemed, to me, foolhardy. What if the other foot slipped? How could she sing and hop and hold a leg in a plaster cast off the ground? Well… she did! Show over, Ben carried her back off to rapturous applause.

This was pure Courtney – professional, committed, risk-taking and fearless. Shane / Courtney has always been a hard worker, a gifted communicator and thoroughly adorable. Well done UK – you made a great choice.