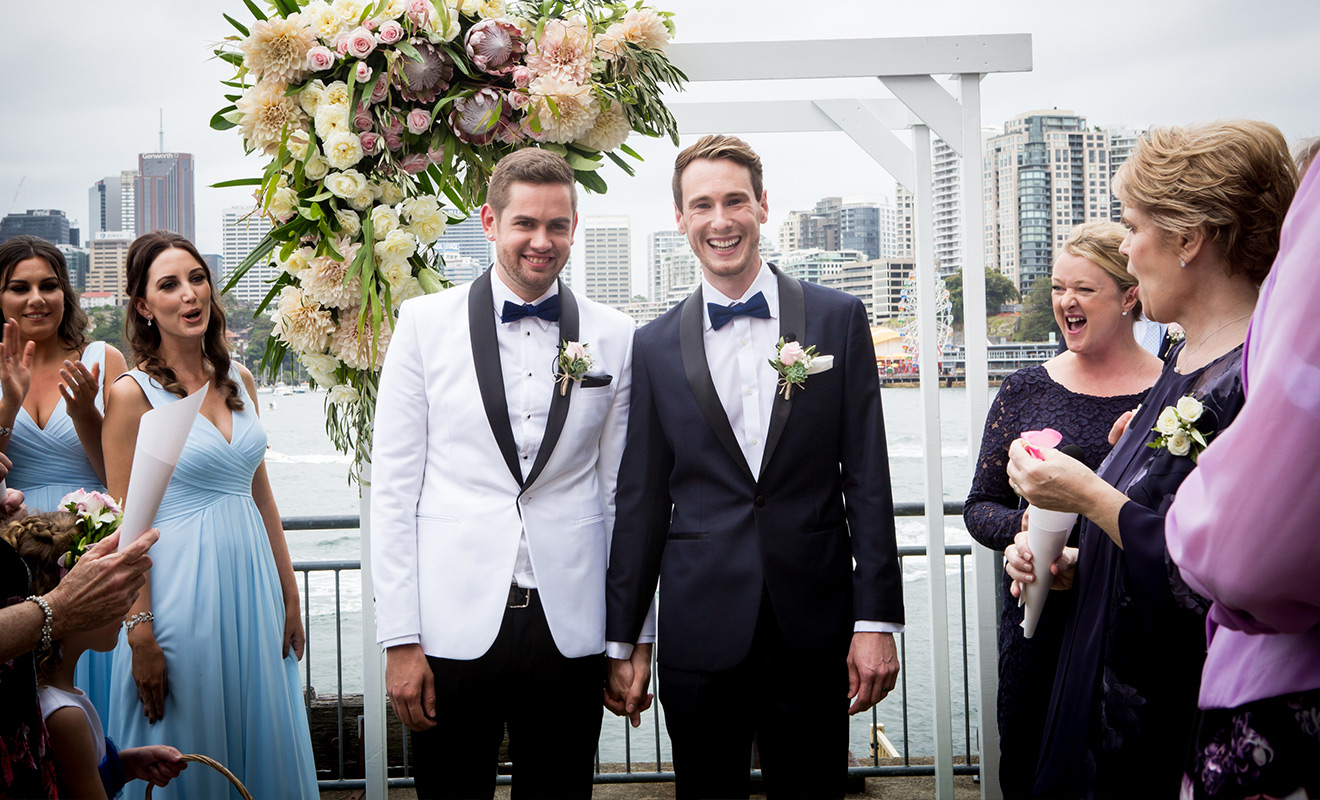 Ben And Michael Gresham-Petchell’s romance included a video proposal, Disney songs, and a fully catered wedding and reception they won in a competition! They spoke to DNA…

Your wedding day was special for all the usual reasons – but also because you won a competition. What happened?

Michael: We had to write 500 words about why we wanted to win a competition for a same-sex wedding – and we won.

Ben: I still can’t believe it. We thought we had no chance. The prize included wedding dresses but no suits, so we thought it would probably have gone to a female couple.

Michael: We were excited, but had no idea what we were in for. We were lucky to be surrounded by all the love and support of the wedding vendors but it was one of the craziest, most chaotic months of our lives and even though it was free, it still ended up costing us lots of money… just not as much as it would’ve otherwise.

When did you meet, and when do you realise you’d met “the one”.

Ben: We met at a mutual friend’s birthday party but didn’t hit it off straight away. It wasn’t until a few months later at the same friend’s farewell party that the sparks started to fly. We chatted on the phone for hours after that party and went on a few dates. Next thing we knew we’d booked a trip together to Japan and fallen in love. It was in Japan I realised I’d met “the one”.

Michael: I knew after the first date, but I didn’t want to be too forward. I started creating a video where I said one word a day for 365 days where it ended in, “Will you marry me?” I kept that video for a couple more years for that special moment when he asked.

“Walking down the aisle towards this wave of love from family and friends, and seeing Ben at the end was overwhelming and magical.”

That is so Love Actually-romantic! You knew for over a year that you wanted to marry him?

Michael: Our first date went over the course of a weekend and it was like we knew each other for years. After that I started putting the plan into motion. I wrote down what I was going to say [one word a day] for the next 365 days and away I went.

Was marriage something you had both wanted, or was it a decision you made after meeting one another and falling in love?

Ben: Marriage is something that has always been important to me. However, I’d never known if it was something that I would do or be legally allowed to do. It’s a huge step in any relationship. It took me longer than Michael to get to that point but after being together for two years I decided to propose while on a surprise trip to Hong Kong, and he said yes.

So, Michael, even though you’d been compiling the video proposal, Ben beat you to it?

Michael: Well, the video had to end after 365 days, and when I was nearing the end I started hinting possible marriage thoughts. He asked in such an extravagant way in front of the Disneyland Castle in Hong Kong, and I asked him the very next day [with the video]. Marriage was something I thought about but never let myself contemplate because I didn’t see it being possible. We’d proposed to each other before marriage equality [became legal] but we secretly hoped that we’d get married in Australia as the debate heated up. We were overwhelmed with joy when equality finally happened.

Your mums walked you down the aisle; what other aspects of the traditional ceremony did you adapt to suit yourselves?

Ben: Our mums – that was really special for us both. Instead of groomsmen and bridesmaids we had groomsmen and groomswomen. Michael wore white – a white tuxedo and looked incredible! We also did our own vows to each other and had live music.

Michael: The groomsmen and us had some sneaky rainbow socks on, which is probably not the norm as part of a wedding suit.

Ben, tell us about your nanna and her Yes campaigning during the postal survey.

Ben: My Nanna is 93 years old. She attends church each week and encouraged all her friends to vote “yes” in the postal survey. My nanna supports marriage equality because of her faith, not in-spite of it. She didn’t understand why it had taken so long. She was thrilled to attend our wedding. We would’ve gone to New Zealand if it wasn’t legalised here and she wouldn’t have been able to come. She loved the wedding, had a dance, a few wines and even used a photo booth for the first time. I feel very thankful to have her in my life.

“We are excited about what marriage equality has given us and the opportunities that all same-sex couples now have.”

Were you both also involved in Yes campaigning?

Ben: Yes, in the Blue Mountains. We wrote a letter to our neighbours and delivered it to half of our village in Warrimoo asking them to please vote “Yes” in the postal survey so that couples like us could get married. We also helped out on street stalls and at train stations talking to people and handing out leaflets. I remember, a couple of times, going home feeling emotionally wrecked. Even though most people were good, there were quite a few who weren’t supportive and who felt they had a right to be nasty and call us names.  Fortunately, those people were in the minority… and now we’re married.

Michael: It was a tough time, but it felt good actively trying to achieve marriage equality. We were lucky to have each other through that time, supporting each other. I can’t imagine how hard it must have been for others.

At the reception did you did maintain the tradition of first dance?

Ben: Yes, we had the first dance. Although we didn’t have much time to practice. I was so glad when it was over!

Michael: Disney has been a big part of our relationship – Ben proposed to me in front of the Disneyland Castle in Hong Kong. We did our first dance to So This Is Love from the old Disney film Cinderella. I took the lead, and looking at the video afterwards I don’t think we were too shabby at all.

Does being married make the relationship feel different?

Ben: Yes, we feel a deeper sense of connection to each other and to each other’s families. I feel like I’m in it for the long haul now and that’s a great feeling.

Michael: Yeah, I agree. It makes us feel like our relationship is much stronger and more grounded and this feeling of having our whole lives together ahead of us. The wedding was something we never dreamed of. This year we have six weddings booked already! We are both so excited about what marriage equality has given us and the opportunities that all same-sex couples now have.