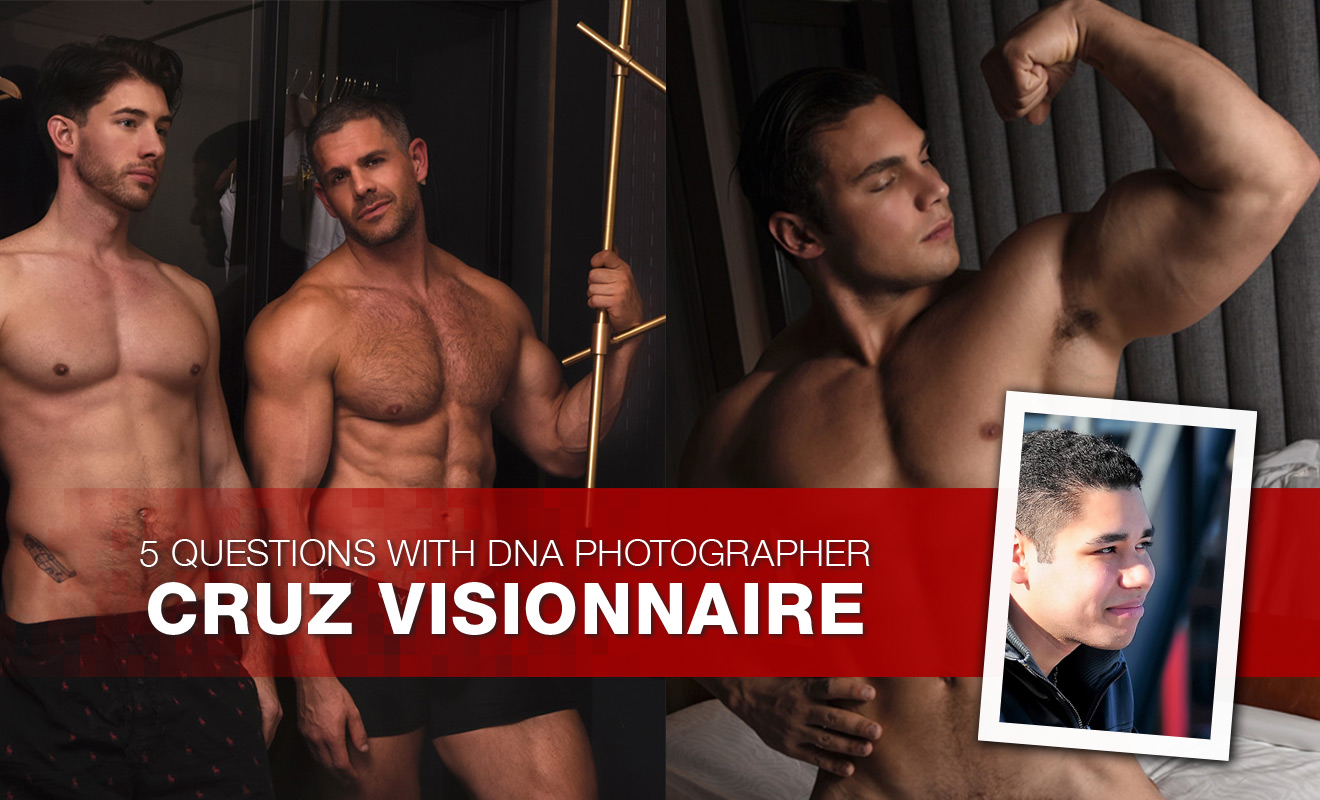 Having just launched a Kickstarter to raise the cash he needs to produce his first coffee table photo book featuring nude photography, Cruz Visionnaire is this weeks DNA feature photographer.

DNA Magazine: How or why did you get into male physique photography?
Cruz Visionnaire: I am currently a graduate student studying photography. I have worked with all sorts of subjects, and I found naked men are what I love photographing the best. It’s always a fun experience when they strip away everything and then you see this other side of them, true to who they are, and they make the special connection with your art, you create something extraordinary together. Love what you do, do what you love.

DNA: What makes a good physique model?
Cruz: I’m only stating this for me and for my work. A model not only with a great physique, but more importantly the art of seduction, the body language, the facial language. Like performing artists, there are two types of excellent models. Those who don’t even have to try, the artistry just come out naturally; and those of excellent methodology, you can see how they use all sorts of preparations to achieve that look they promise to deliver. I have the pleasure to work with many of both types of talents.

DNA: What gear do you usually use for a shoot?
Cruz: Nikon D810 with a selection of Nikkor lenses. For lighting, I use them all: natural light, available light, artificial light. For artificial light, I use electronic flashes quite a lot; sometimes I use continuous light as well.

DNA: What has been the most interesting experience to happen during a shoot?
Cruz: Model, Roman Khodorov’s final shoot has been one of the most memorable and surprising experiences. Roman earned his international fame as a fitness and fashion model soon after he got into the modeling industry. We have known each other for years. When we first met, I was studying at the New York Institute of Photography. Roman liked my work quite a lot, and he took some time out of his busy schedule in New York and did a photo shoot with me. Two years ago Roman officially retired from modeling. I think it’s really brave of him to exit from a stage of international fame to pursue other dreams and leap into the next chapter in his life. Last month, Roman was in New York and we reconnected. To my surprise, he wanted to do one last photo shoot with me. And like never before, this time without the limit or judgment from the fashion industry, Roman bares it all, in explicit and full Roman’s out-of-this-world beauty, breaking all the rules, and gives a perfect ending to the final photo shoot of Roman Khodorov. These treasured and exclusive images are featured in my photo book Meatpacking District, which just went live on kickstarter.

DNA: It’s hard to ask a photographer which one photograph is his favourite=, so which three are your favourite male physique photos that you’ve taken and why?
Cruz: I am going to select 4 models, and 5 photos.

Eric Turner – I knew him from DNA magazine when I was in high school. I have been a super fan (and in love) ever since. It is not until last year 2017 December that I had the great pleasure to meet Eric in person and do a photo shoot with him. He is such a nice guy, sexy and sophisticated. My buddy Chad Allen Jackson joined the photo shoot, and we made some really cool shots.

See the uncovered version of Richie in our subscriber section here.

Richie Lam – Richie is a bull — I think the photo is quite self-explanatory. Of All the guys I have worked with, Richie is truly a free spirit. Don’t get me wrong, he is very charming and personable. But when it’s time to show off his body, he does not hold back, and every pose he strikes exuberates pride and exhibitionism, no matter in private or in public. He is simply fascinating.

Roman Khodorov – This photo comes from Roman’s exiting photo shoot. There are so many feelings entangled in this photo. You see this naked young man at his bed, and he is obviously an object of desire, the highlights and the shadows accentuate his stunning beauty. But you cannot help sensing a bit of sadness from the blue tones of the shadows, as he faces away, because this is goodbye. On the contrary, the white highlights are beautiful, peaceful and comforting. I can stare at this photo for a long time, and everything feels not quite normal. I feel exited and at the same time upset

Anatoly Goncharov – Anatoly and I have been admiring each other’s work for quite a while. When he recently visited New York, we finally got a chance to get together and did a cool photo shoot. In this photo we climbed on top of the roof in my college, and the weather started to get really bad. And luckily, we got some real cool shots just before the storm.