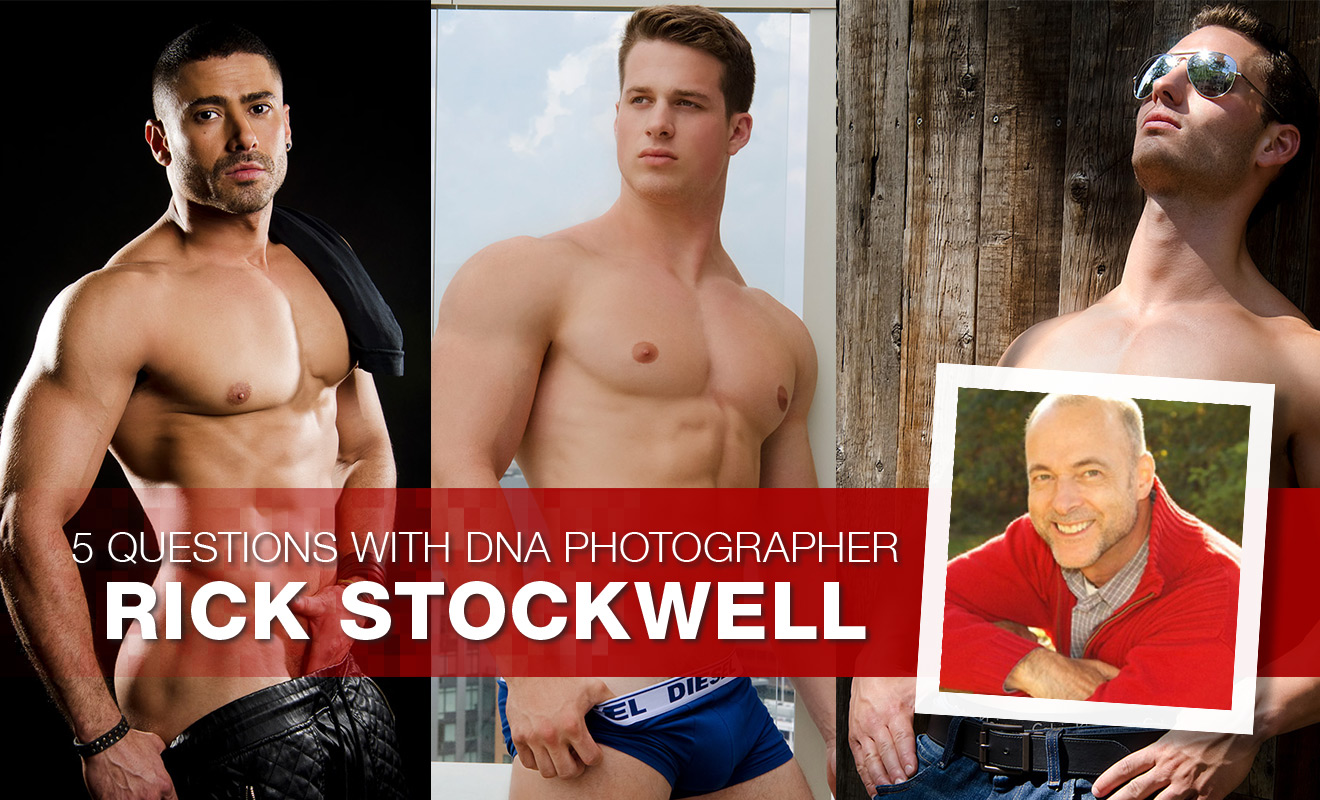 DNA: How did you get into male physique photography?

Rick: I was a professional actor, singer and dancer all my life. In between acting jobs I used to work as a bartender and waiter. My partner – now husband, encouraged me to take up headshot photography, based on my attention to detail when shooting snapshots. It seemed like a good idea, so I took photography classes for 2 years and started shooting headshots of friends for very little money. Before too long, I was making more money as a photographer than I was as an actor. I’d always admired the work of Herb Ritts and secretly aspired to shoot artful photos of hot men, but headshots were an easier and more practical way to earn a living as a photographer.

After moving to New York from Los Angeles in 2006 and finding it harder and harder to make a living as an actor/singer, I decided to devote my talents solely to photography. Despite my love for shooting headshots, I longed to do the kind of photography that had originally inspired me to pick up a camera. Finding models was very difficult in the beginning. But social media helped to showcase my new found photographic style, and before long I was developing my own particular colorful, sharp and commercial style of physique photography.

R: A good physique model needs to be well-defined and CUT! He doesn’t need to be tall, although that doesn’t hurt, either. But I can make a well-defined model look much taller than he is by shooting from a low angle. A V-shaped torso is ideal, of course, with great quads and a great butt. Of course, bigger is better for me, because the camera always seems to make a model look smaller than he is. I prefer smooth models with big pecs so the oiled muscles gleam in the light. But there seems to be a growing segment of the gay population that prefers their men with some natural body hair.

But beyond physical attributes, I want to work with models who have a professional attitude. And for me, that starts with models who can communicate well with me beforehand through texts or e-mails or phone calls. I never like to shoot a guy I know nothing about, so I will make an attempt to get to know the guy a bit through conversation. And I’ll also do a little research on him before he walks in the door. After all, we are going to be spending a few hours together – and it’s just as important for me to feel comfortable as it is for him. I try to build a certain amount of trust and friendship before the day of the shoot. And it’s imperative that models show up on time, with their body hair well-groomed and their nails clean and trimmed; their hair style looking great and any facial hair neat and trimmed.

I love a model who has a sense of fun and abandon and be willing to try new things, while trusting the photographer’s vision. And being an exhibitionist is always a great thing in a physique model! To have that kind of confidence is a wonderful thing to be around with my camera!

DNA: What gear do you usually use for a shoot?

R: I’m a Nikon shooter. I have been for years and probably always will be! I used regular Speedotron stobe lights in the studio with a power pack; four light system. I will use soft boxes as light modifiers and sometimes not, depending on how hard and bright I want the light. And when I shoot natural light, I usually enhance the ambient light with a little burst of off-camera flash. Outside, I work with a reflector many times and off-camera flash.

DNNA: What has been the most interesting experience to happen during a shoot?

R: During a shoot, the most interesting thing that happens occasionally, is that a model who may seem to be a certain way, maybe a little introverted or unsure of himself in the beginning of a shoot; then he totally transforms during the process and turns into someone who is completely different than what you expected him to be. Some models will get so turned on by the camera and the flashing lights, that they become someone quite different from my expectations. It’s incredible when that happens and I love it. And then, of course, the thing I enjoy most when shooting on location with a muscle stud in underwear, are the crazy reactions from passersby, and the wild comments people in New York will come up and say to us!

It’s hard to ask a photographer which one photograph is his favourite=, so which three are your favourite male physique photos that you’ve taken and why?

Why do I like this one so much? First of all, Nick is a spectacular fitness model: hot, perfect body, handsome All-American good looks and great to work with. I love the way the sun went behind the clouds so the image is not contrasty from shooting in direct sunlight. I like my low angle which accentuates his bulge, his trim waistline and his huge guns and hot, naturally smooth pecs. It was shot on the sundeck of my apartment building overlooking the Hudson. And on this exact spot where Nick is posing, my husband and I were married a year later at sunset. So it’s an important and significant location to me!

Chris is the one of the handsomest models EVER. He can act, too! During this shoot, his body was jacked! I left him standing along this restaurant wall (Southern Hospitality restaurant on W. 45th St. here in Hell’s Kitchen, owned by Justin Timberlake) as I ran home to retrieve a piece of equipment that I had forgotten. I just think he looks so damned sexy here; a street hustler taking a break to soak up the afternoon sun.

I shot this image for a magazine cover and they ended up using a picture that was not as hot as this one. This guy was just such a natural model, completely comfortable with his sexiness – so at home in his skin. He brought all the right clothes to the shoot and couldn’t take a bad picture if he tried. It was just a great shoot and he was in peak physical condition.